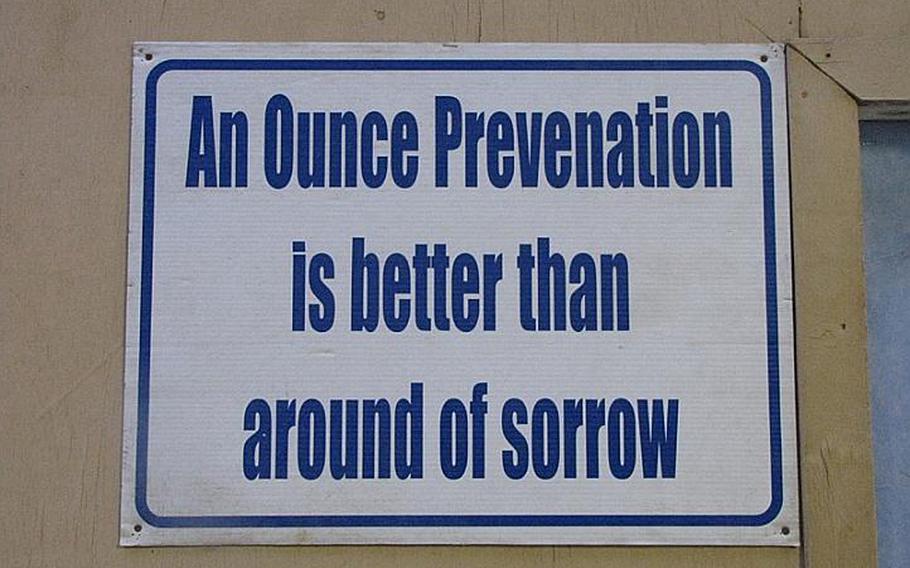 A sign outside the pharmacy at the Egyptian Field Hospital at Bagram Air Field in Parwan province, north of Kabul. (Patrick Dickson/Stars and Stripes)

A sign outside the pharmacy at the Egyptian Field Hospital at Bagram Air Field in Parwan province, north of Kabul. (Patrick Dickson/Stars and Stripes) 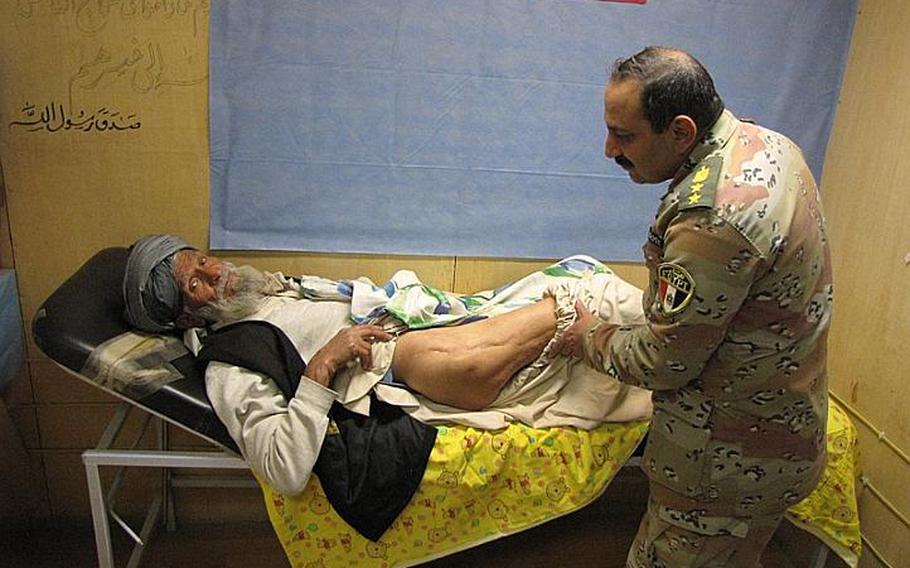 Rahim Khan, who guesses he is 55 years old, has his hip looked at by Dr. (Col.) Eham Karam Henein Morcos, chief doctor at the Egyptian Field Hospital at Bagram Air Field in Parwan province, north of Kabul. Rahim was injured when his house was hit by a Taliban rocket in the last days of the Taliban's rule in Afghanistan. (Patrick Dickson/Stars and Stripes) 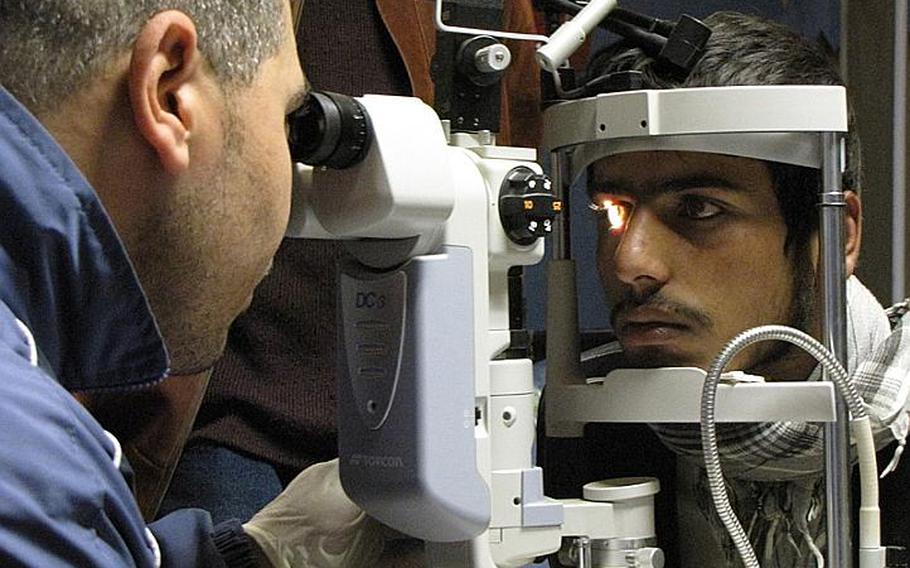 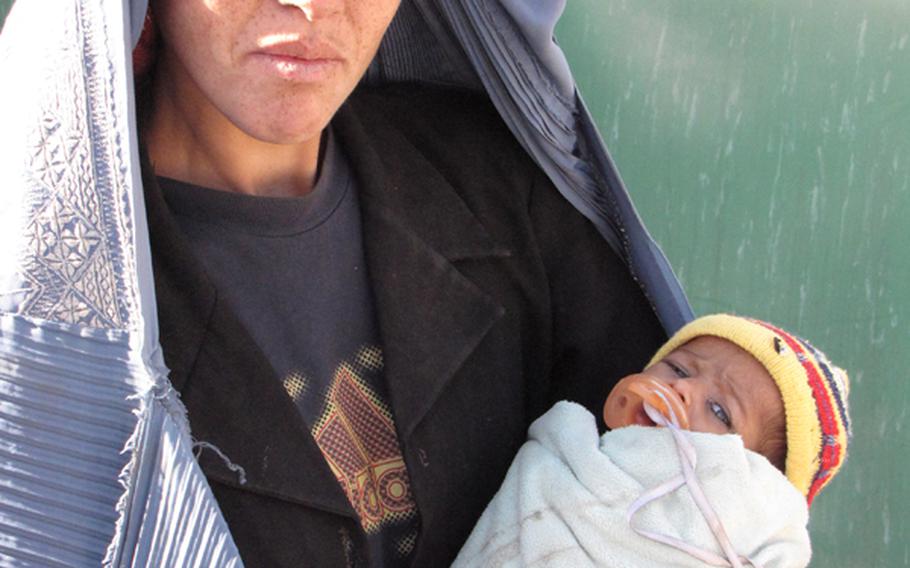 Askan, who believes she is 19 years old, holds her six-month-old son Meshgan at the Egyptian Field Hospital at Bagram Air Field in Parwan province, north of Kabul. Due to poor nutrition, Askan was unable to produce breast milk. Meshgan was nearly dead from malnutrition when she showed up at the hospital, with her 3-year-old son Moni also in tow. Meshgan has steadily gained weight, and is in the clear. (Patrick Dickson/Stars and Stripes) 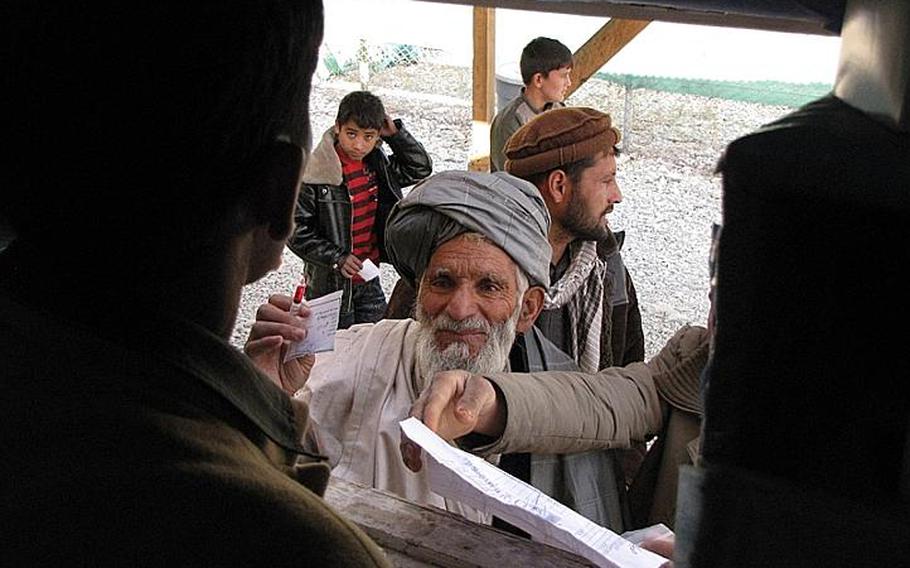 Rahim Khan, who guesses he is 55 years old, gives his prescription to an Egyptian soldier working in the pharmacy at the Egyptian Field Hospital at Bagram Air Field in Parwan province, north of Kabul. Rahim was injured when his house was hit by a Taliban rocket in the last days of the Taliban's rule in Afghanistan. (Patrick Dickson/Stars and Stripes) 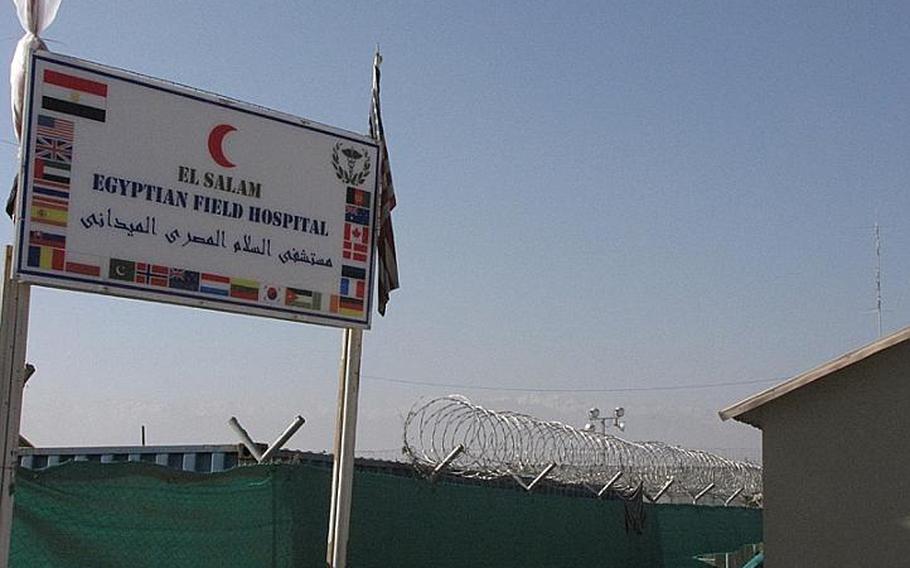 The entrance to the Egyptian Field Hospital at Bagram Air Field in Parwan province, north of Kabul. Staff at the small compound on Bagram have treated more than 600,000 locals since they began in 2003. (Patrick Dickson/Stars and Stripes)

BAGRAM AIR FIELD, Afghanistan &mdash; Rahim Khan has come from the village of Torkchi to have his hip looked at. Near the end of the Taliban reign, a fighter fired a rocket at his house, and a large mud brick fell on him.

Sixteen-year-old Kamal has come from Chaical village. Trauma from a motorcycle accident four years ago has left him with a wandering eye.

Six-month-old Meshgan almost died from malnutrition because his mother could not produce breast milk. He receives regular feedings here.

They were among the 20 or so Afghans who came to Bagram Air Field on Wednesday for free examinations, courtesy of the Egyptian Field Hospital. It would be a very slow day; the hospital usually sees 250 to 350 people per day, but the Egyptians are rotating teams, and had minimal staffing as they prepared to leave.

The hospital, operating out of the wooden B-huts that dot the entire base, offers surgery and outpatient care, with specialists in many disciplines, including dentistry, ophthalmology, gynecology and pediatrics.

One of four medical facilities on the massive air base in Parwan province north of Kabul, the Egyptian hospital is staffed by 14 doctors and 20 nurses who provide health care to Afghans as an instrument of &ldquo;soft power,&rdquo; a way to give locals tangible aid and, hopefully, win some of those hearts and minds sought in counterinsurgency strategy.

Dr. (Col.) Eham Karam Henein Morcos is the chief. According to Karam and the hospital&rsquo;s commander, Col. Khaled Farghaly abd Elsamee, Egyptian medics have helped more than 600,000 Afghans on an outpatient basis since the hospital opened in July 2003. They have performed more than 2,600 operations on locals, with Khaled&rsquo;s team doing 284.

Most come in suffering complications from malnutrition and anemia. Tuberculosis, hypertension and diabetes are common. And because much of it goes untreated, patients often arrive in distress, including some &ldquo;in severe coma,&rdquo; Karam said.

The same can happen when there is external injury.

&ldquo;Sometimes, one month after [breaking a bone], they come,&rdquo; he said, because the locals have no money, or no way to travel.

What the hospital provides is a largely Muslim face &mdash; some Egyptians, including Karam, are Christian &mdash; to a population that might resist treatment by a Westerner.

There are also Afghan interpreters, to handle the Dari-to-Arabic translations. Many are doctors who come every day from Kabul to translate and to learn from their Egyptian colleagues. The Afghan doctors sometimes assist with surgeries, but many are happy to have a coalition-provided salary, which some of the Egyptians speculated was more than they would make practicing medicine in Kabul.

Egypt is one of just three Arab countries &mdash; the others are the United Arab Emirates and Jordan &mdash; providing troops in Afghanistan, a fact not lost on some.

&ldquo;United States has bases in Kuwait, in Qatar, in Bahrain,&rdquo; complained a United Arab Emirates soldier at the compound. &ldquo;Where are their soldiers?&rdquo;

Afghans have come from all over the country to this hospital, the Egyptians said, but most are from the area.

They run a gantlet of Afghan, Egyptian and U.S. security to get on the base.

A small contingent of U.S. forces does eye scans and fingerprinting on each visitor coming in the small gate on the side of the Bagram village, home to about 1,000 Afghans.

They check the retina scan against the growing national database, and add those not in it. On this day, one man&rsquo;s name was in the system as having had insurgent connections. He sat waiting for U.S. intelligence officials to come &ldquo;have a chat,&rdquo; a U.S. Air Force security policeman said.

There also are cultural hurdles for locals. Many have been reluctant to accept care, even from medical staff who are mostly Muslim.

Women in particular were slow in trusting, at first only wanting to deal with the female Egyptian nurses. But Karam says about 70 percent of the women who come in the gate now are willing to be treated by a male doctor.

Still, some are not.

Karam spoke of the heartbreak of dealing with a population plagued by fear and anchored in another culture.

&ldquo;Sometimes,&rdquo; he said, &ldquo;the woman is told she needs C-section, or she die. She say, &lsquo;I ask my husband,&rsquo; and we never see her again. What happens, we don&rsquo;t know.&rdquo;