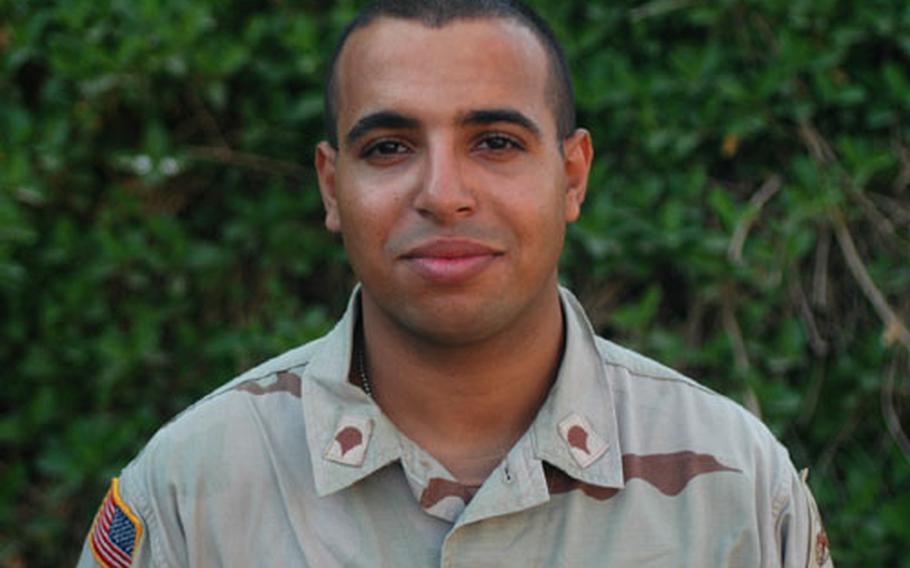 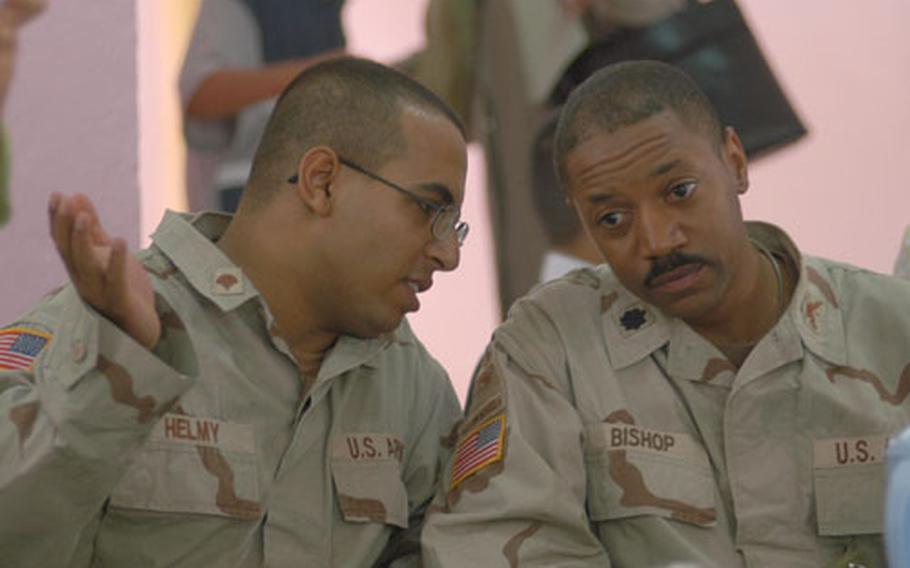 Spc. John Helmy, a supply specialist with the 1st Armored Division’s 1st Battalion, 37th Armored Brigade, translates a speech made by an Iraqi school official to battalion commander Lt. Col. Garry Bishop during a ceremony marking the reopening of the school in a northern Baghdad neighborhood. Helmy was born and raised in Cairo, Egypt, and speaks Arabic as his native language. (Jason Chudy / S&S) 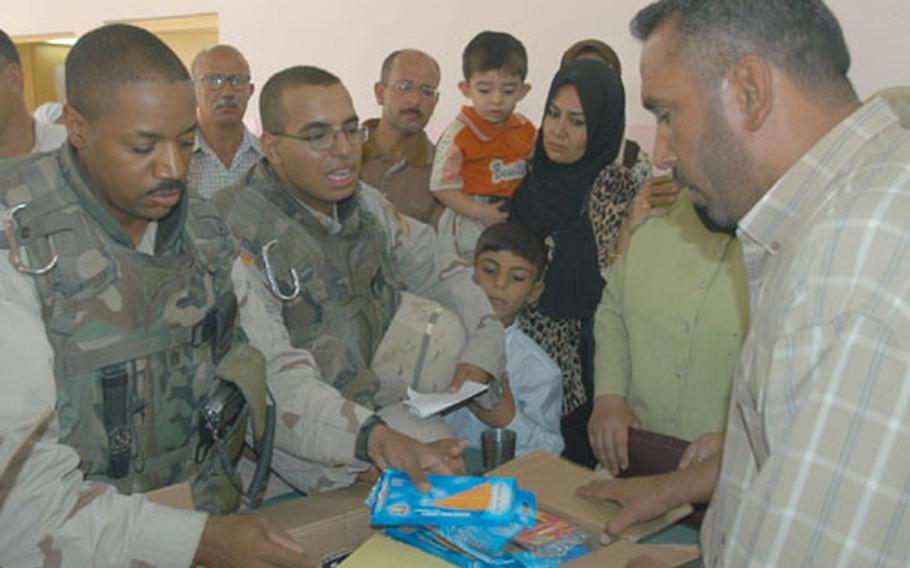 Lt. Col. Garry Bishop, commander of the 1st Battalion, 37th Armored Brigade, 1st Armored Division opens packages of school supplies donated by the unit’s family readiness group in Germany as Spc. John Helmy explains to school officials and teachers about some of the items in the boxes. (Jason Chudy / S&S)

Spc. John Helmy of headquarters company&#8217;s supply branch was born and raised in Cairo, Egypt. His native language is Arabic.

Bishop, who assumed command of the Bandits on June 12, at first used Iraqi translators, but took Helmy along to make sure conversations were translated correctly.

Helmy was born to Egyptian parents in Cairo, but is not a Muslim. He&#8217;s Coptic Orthodox, the primary Christian religion in Africa.

In 1999, at age 17, he emigrated to Columbia, Pa. He graduated from high school a year later and enlisted in the Army. He earned his American citizenship on Feb. 26.

Helmy said that living in America helped him understand Bishop&#8217;s message better than the Iraqi translators. His experiences allowed him to step in when needed.

As Bishop visited community and religious leaders in the community, Helmy was always present.

Eventually, Bishop began using only Helmy when he went out.

Helmy&#8217;s Arab ancestry carries a lot of weight with the Iraqis, Bishop said.

With Helmy, Iraqis know exactly where he stands.

Many Iraqis think Helmy is an Egyptian who just works for the Americans, Helmy said.

But Helmy has provided more than just help with the language, Bishop said.

On Saturday, Helmy climbed into the backseat of Bishop&#8217;s Humvee at the Bandits&#8217; base in the former Baghdad Island amusement park. As they left the compound, two large Army trucks filled with school desks followed them.

The unit&#8217;s area of operations is one of the largest in the Baghdad area, with a portion inside the city itself and most in rural, agricultural areas north of the city.

Bishop&#8217;s first mission of the day was to deliver the desks to two Baghdad schools that had been renovated and repainted by soldiers, Iraqis and nongovernmental organizations. The 501st Forward Support Battalion donated the desks and the Bandits&#8217; family readiness group in Germany donated school supplies.

At the first school, a group of journalists mixed with the schoolchildren, and Bishop was interviewed by the American and Arab reporters. Helmy stood at his side, translating questions and answers.

During small ceremonies at both schools, Helmy leaned close to Bishop&#8217;s ear, giving a play-by-play of the officials&#8217; speeches and the schoolchildren&#8217;s songs.

Helmy&#8217;s been with Bishop for everything from visits to area markets to raids into the area&#8217;s villages looking for weapons. On one raid, Helmy&#8217;s Arabic came in handy when a resident told them of other weapons he had found.

&#8220;A lot of informants would not talk to anyone with an Iraqi translator,&#8221; Bishop said. Many are still leery of agents from Saddam&#8217;s government.

Bishop was looking for playground equipment, but didn&#8217;t know where to get it. His quest led him to a local Sunni sheik.

Saddam Hussein is a Sunni, as were most of his top Baath party officers.

Then the two sat down for a three-hour conversation.

Through his translator, Egypt-native Spc. John Helmy, the commander told the sheik, &#8220;My presence and your presence are intertwined for the future of Iraq.&#8221;

Then, on a hunch, Bishop told him that he knew he had weapons.

Bishop then took off his flak jacket and said that since he was in his house, the sheik was responsible for his safety.

The show of trust worked.

The sheik admitted that he had been planning for months to carry out an attack on Americans. He did have weapons but hadn&#8217;t used them yet.

He told the man he could keep AK-47s but needed to turn in anything bigger.

A week later, the sheik met with other Sunni tribal leaders and told Bishop that he would turn in the weapons. But, the sheik didn&#8217;t want anyone in the community to know.

The sheik set the meeting for midnight at his house.

They arrived to find the sheikh and other members of his tribe waiting for them. They provided tea to the Americans and then told them that some bags lying nearby held the weapons.

Inside were eight rocket launchers, 30 hand grenades with fuses, 22 rockets and between 10 and 15 rocket-propelled grenade propellants. Four of the RPG rounds were sabot rounds designed to destroy tanks.

Dirt on the bags was still moist from being dug out of the ground.

The sheik has since begun working with the coalition.