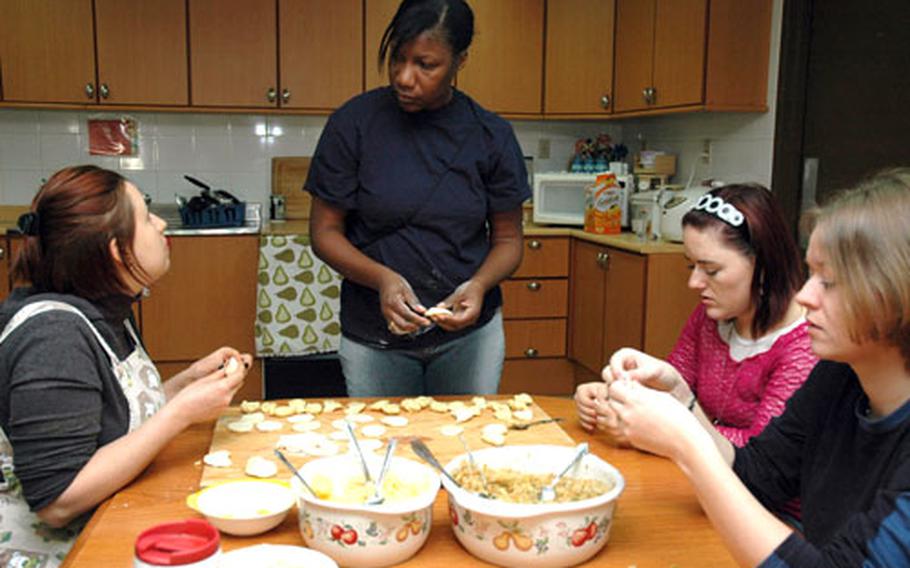 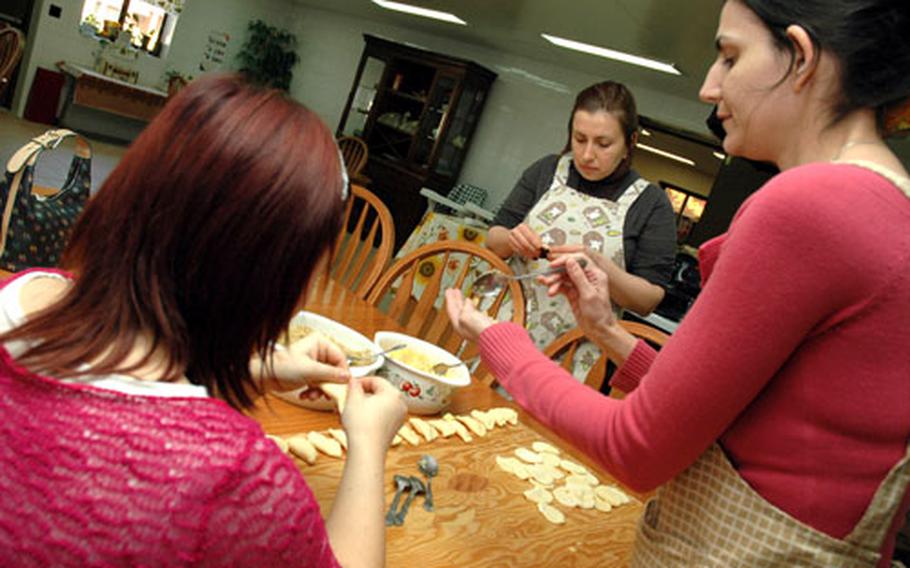 Tisha Edwards, far right, stuffs a pierogi dumpling Friday morning at the Pear Blossom Cottage at Camp Red Cloud in Uijeongbu. Edwards first started coming to the cottage when she and her husband were on unaccompanied orders in Uijeongbu. "I felt I could stay here," she said of the center&#39;s help in making her feel at home in Korea. Now, she still visits the center regularly even though her family is on accompanied orders. Elena Blessig (far left) and Olga Escano help make the cabbage and cheese-stuffed dumplings. ()

CAMP RED CLOUD, South Korea &#8212; Natalia Levtchenko&#8217;s recipe for pierogi dough would sound corny coming from anyone but her.

Levtchenko, the manager of the Pear Blossom Cottage at Camp Red Cloud for the past four years, rolls out love as easily as dumpling dough for the families of soldiers stationed here. She teaches cooking, organizes outings, and gives wives and children a place to gather and make friends while their husbands are on duty.

The cottage &#8212; a section of the Morale, Welfare and Recreation building on Red Cloud &#8212; was created about seven years ago. It has a living room, play room, laundry room, computer room and a kitchen where Levtchenko and other women share their talents.

Anyone can use the cottage or participate in its activities for free, but they must register with the center first, Levtchenko said.

Tisha Edwards came to South Korea about two years ago after her husband, a soldier, received orders for an unaccompanied tour. Edwards came for a visit with her 2-year-old and 3-month-old sons. Once she met Levtchenko and other friends at Pear Blossom, she decided to stay.

&#8220;You don&#8217;t think there are other women here like you,&#8221; she said Friday, after enjoying a helping of homemade potato-and-cheese and cabbage-stuffed dumplings.

Through Pear Blossom, she found other &#8220;unaccompanied&#8221; families like hers, who had the same worries about schooling and day care and living in a foreign country. &#8220;It was a home away from home.&#8221;

Part of that homey feeling comes from the center&#8217;s huge kitchen, a space big enough for four dining tables, an island with two stovetops and a sewing corner. On Friday, Levtchenko and five women stuffed hundreds of dumplings and boiled off a few dozen for lunch.

Each woman got a turn at making the dough, which outside of the ingredient list had no real recipe with measurements or instructions. Instead, Levtchenko walked each woman through the mixing and kneading process, then she showed how to roll out the dough, cut it into rounds and stuff it with the fillings.

&#8220;My daughter grew up here,&#8221; said Olga Escano, who has been in South Korea for eight years and often comes to the cottage. In recent weeks, she brought Elena Blessig to the center. Blessig, who arrived in South Korea with her husband about three months ago, met Escano because she was speaking Russian.

Each month, about 200 to 300 people use the center, Levtchenko said. The families represent a mix of nationalities including Russian, Korean, Japanese, Hungarian, American and Filipino. In October, the women learned to cook Chinese food. The month before, they made FilipinoPhilippine fare.

Levtchenko said the cooking lessons will resume in January, after the holidays. But the kitchen will still be busy making holiday cookies, she said.