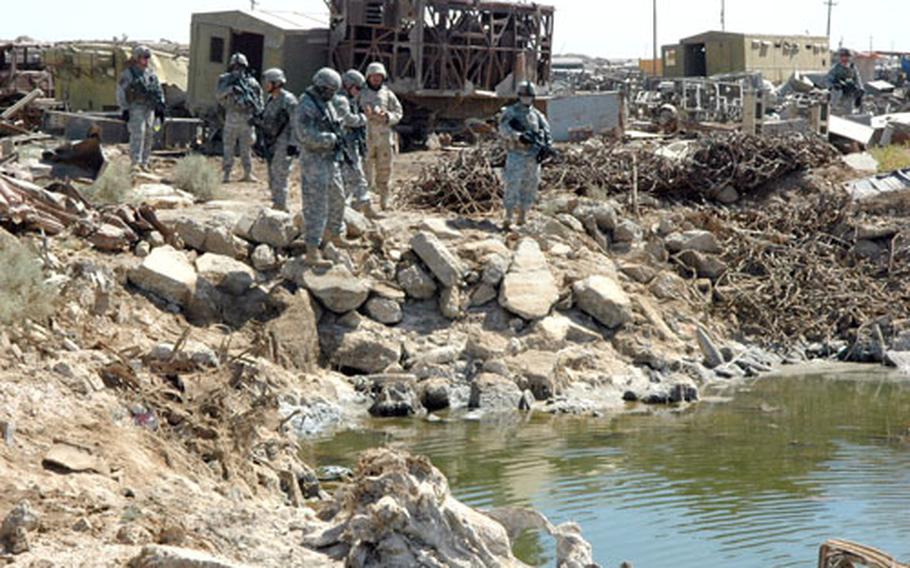 Soldiers from the 1st Battalion, 17th Infantry Regiment, 172nd Stryker Brigade Combat Team examine a lagoon in a junkyard during an operation in Shab on Thursday. (Anita Powell / S&S)

Soldiers from 1st Battalion, 17th Infantry Regiment conducted a daylong search mission in Shab, a poor, mostly Shiite neighborhood that abuts Sadr City, the infamous slum that is home to more than 3 million of the country&#8217;s most restive Shiite population.

The battalion initially entered Sadr City on Sunday in an attempt to gauge sentiment in the area; after a day of being barraged with rocks and nasty comments, the battalion has not returned to the neighborhood.

In Shab, operations went smoothly on the first day, with scattered incidences of rock-throwing and gunfire. One soldier was shot but was able to return to duty. Soldiers fanned out into the scrubby area and entered homes, talked to residents and confiscated the odd illegal weapon.

One group found a few dozen old artillery rounds in a stagnant lagoon; the cache was later destroyed by a Navy ordnance disposal team.

The operation, which has been called &#8220;Together Forward&#8221; to reflect its joint Iraqi-American nature, was mainly American troops on Thursday in Shab. A platoon-sized element of Iraqi National Police accompanied the battalion and directed traffic. A squad of the Iraqi force broke off and searched houses.

Whether the operation has actually curbed violence in the capital is a subject of controversy. Earlier this month, American military officials touted their success, citing a dramatic drop in violence.

However, the Iraqi Health Ministry later released figures that showed that the operation has left the number of sectarian killings virtually unchanged from July to August, according to a report by the Associated Press.

For one platoon, the day&#8217;s travails gave a whole new meaning to the term &#8220;junkyard wars.&#8221; For hours, soldiers sifted through an immense scrapyard full of piles of twisted metal, automotive skeletons, and enough metal pipes to launch the mother of all battles.

On the ride back to Camp Taji in the sizzling early afternoon, some soldiers were clearly discouraged by the lack of tangible results.

But for platoon leader 2nd Lt. Mike Gold, the psychological impact of the operation is as important as any pile of weapons.