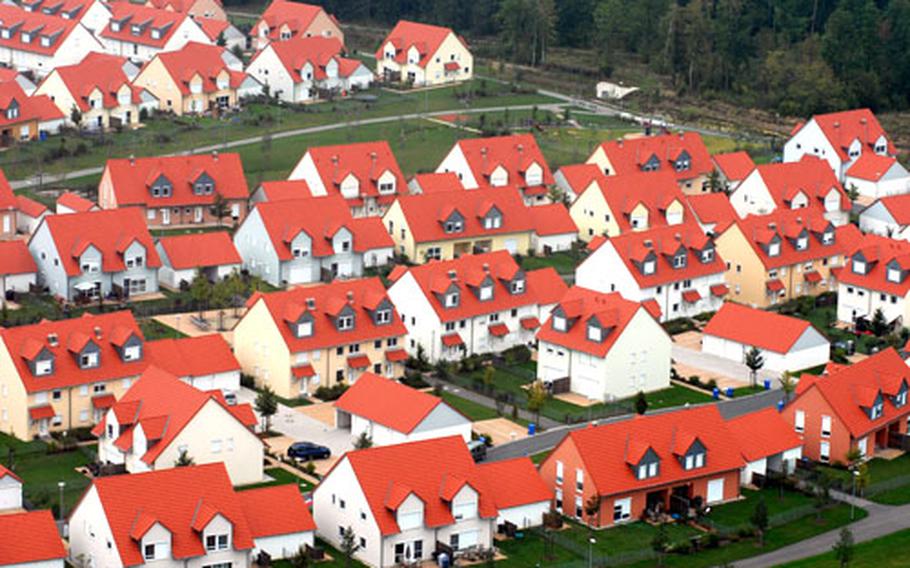 In 2007, the first residents moved into Netzaberg, an off-post military housing area that includes more than 800 homes on the border of Grafenwöhr Training Area. (Seth Robson / S&S)

In 2007, the first residents moved into Netzaberg, an off-post military housing area that includes more than 800 homes on the border of Grafenwöhr Training Area. (Seth Robson / S&S) 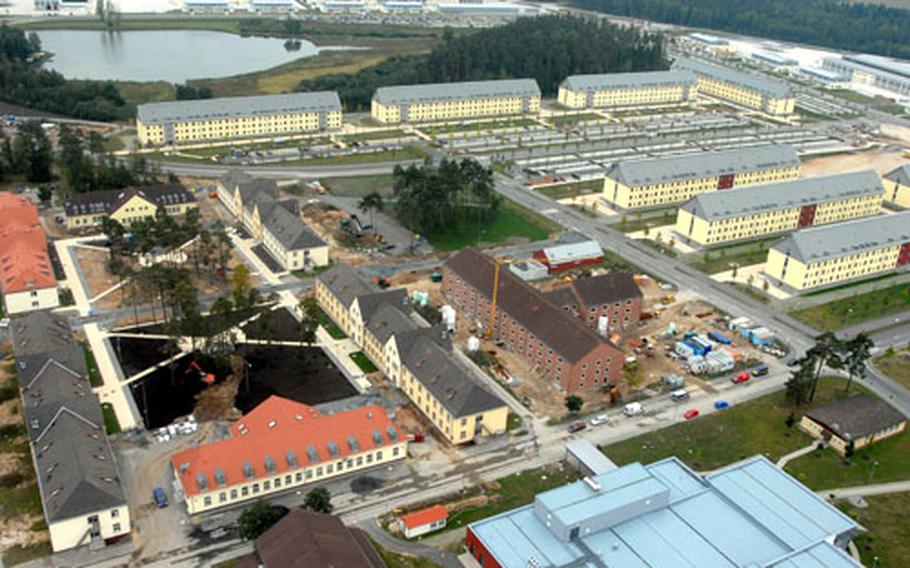 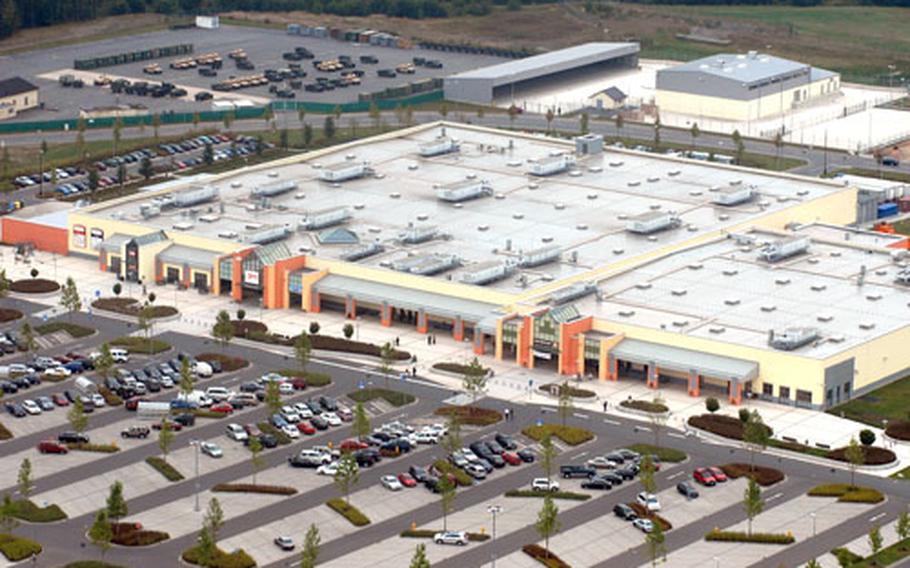 Grafenwohr&#39;s $38 million Post Exchange and commissary mall, which has been open for two years, is one of many major construction projects built at the training area since 2003. (Seth Robson / S&S) 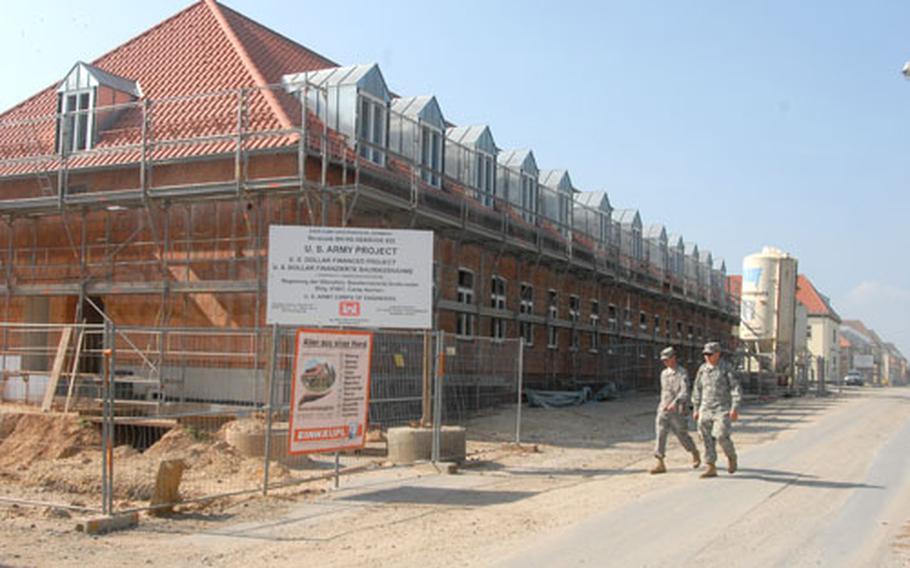 Soldiers walk past one of the many buildings being refurbished at Grafenwohr Training Area on Tuesday. (Seth Robson / S&S) 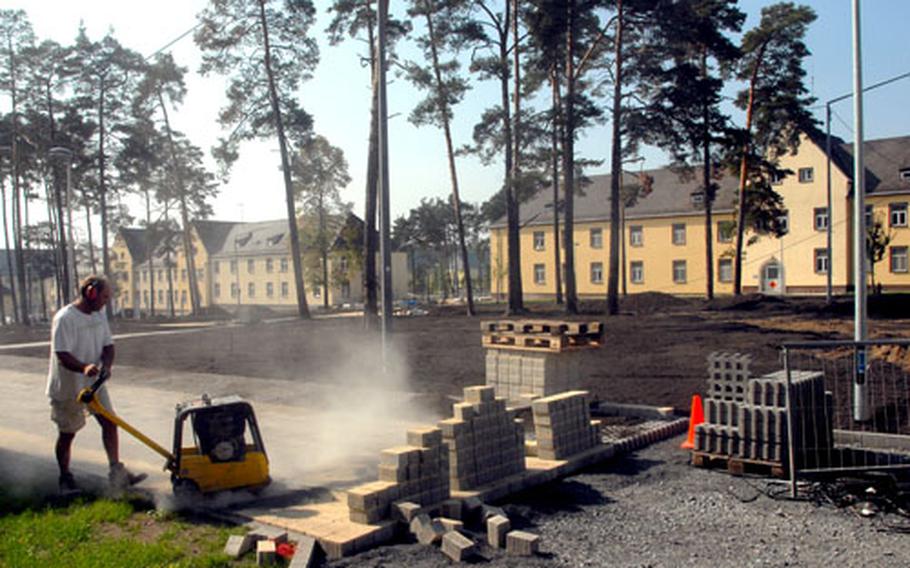 Workers put the finishing touches on refurbished buildings and outdoor areas at Grafenwohr Training Area in preparation for the return of the 172nd Infantry Brigade from Iraq later this year. (Seth Robson / S&S)

GRAFENW&#214;HR, Germany &#8212; A $1 billion construction program that is nearing completion in southern Germany is being held up as a model for future Army building efforts.

Efficient Basing Grafenw&#246;hr &#8212; the Army&#8217;s name for a massive expansion of the Grafenw&#246;hr Training Area &#8212; encompasses 150 projects, including 50 new buildings and 100 renovated buildings, according to U.S. Army Garrison Grafenw&#246;hr spokeswoman Susanne Bartsch. The projects have allowed Grafenw&#246;hr to expand from a facility with 1,000 military personnel to one with 4,500 servicemembers, 8,500 family members, hundreds of American civilian workers and 2,000 German employees, she said.

Only $100 million is left to be spent out of the $1 billion allocated for construction, according to Peter Barth, regional project manager for the U.S. Army Corps of Engineers at Grafenw&#246;hr.

&#8220;We are better than 90 percent complete,&#8221; said Andy Spendlove, a Directorate of Public Works engineer whose office has overseen the construction projects. That office, set up specifically for this construction program, is expected to disband at the end of the month.

When 172nd Infantry Brigade soldiers return from Iraq later this year, they will come home to a base that has added dozens of company operations buildings, several motor pools, four new barracks and a brigade headquarters, Spendlove said.

&#8220;We are pushing like crazy to get the furniture in and the final finishing touches on the buildings before the troops come home. It is going to be real tight but I think we are going to make it,&#8221; he said.

The construction design, which allows soldiers to walk from their barracks to company operations centers and motor pools, then drive military vehicles directly to ranges inside the training area, is seen as a model for the Army, Walter Bogdanow, a U.S. Army Corps of Engineers area engineer for southern Germany, said earlier this year.

&#8220;They like the setup so much that [Installation Management Command] is using it as a standard for facilities back in the States,&#8221; he said.

Furthermore, Spendlove said, Army officials from Vicenza, Italy, who are involved in their own construction project to accommodate the 173rd Airborne Brigade also have visited Grafenw&#246;hr to apply lessons learned from Efficient Basing Grafenw&#246;hr, or EBG as it is known.

And be prepared for changes.

For example, Army standards for arms rooms changed during construction, forcing changes to the design of buildings. And wild fluctuations in the dollar-euro exchange rate complicated some projects, Spendlove said.

Joseph Fiegl, deputy chief of the local German Construction Office, which helped oversee EBG, said other projects still to be funded include a $14.6 million chapel in the Netzaberg housing area, and an emergency services facility, which could cost up to $20 million.

In addition to the major work originally planned, the base is slated to get four more barracks ($17 million to $19 million each) with another two barracks possible.

A new hotel ($20 million) is under construction and likely to be open in January 2011.