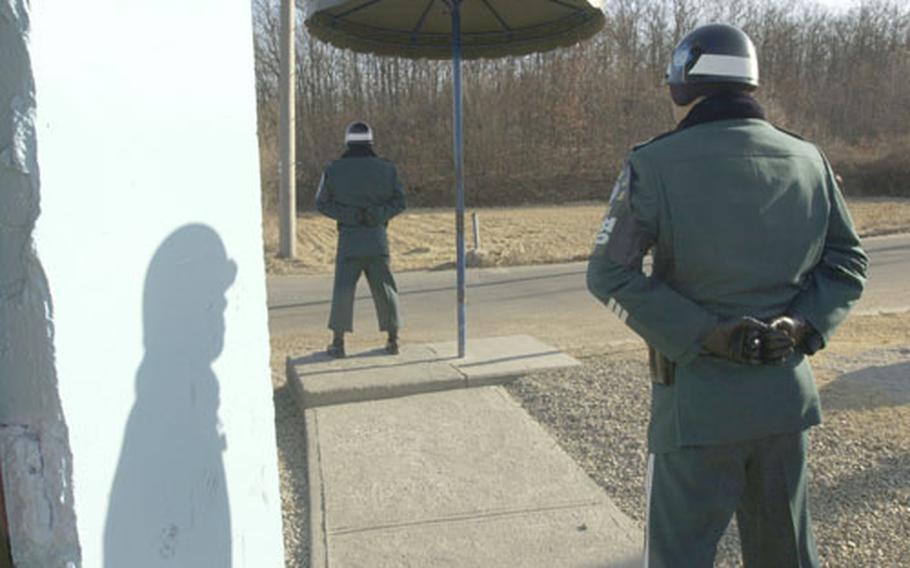 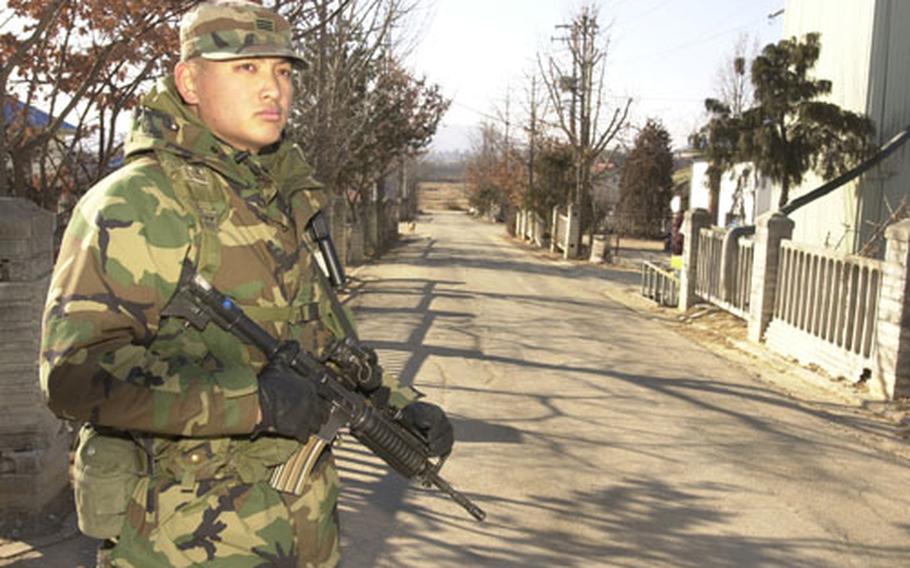 A Republic of Korea (ROK) Army soldier stands guard along one of the streets of Tae Sung Freedom Village. The street leads towards North Korea. Soldiers from the joint US /ROK Battalion provide security for the 226 residents of the village 24 hours a day. (Greg L. Davis / S&S)

The 64-year-old Kim &#8212; a civilian resident living in the Demilitarized Zone &#8212; knows his neighbor may have nuclear weapons and might try to build more.

He&#8217;s one of about 240 residents who live in Tae Sung Dong, the DMZ&#8217;s only inhabited civilian village. The 1953 armistice agreement that ended the Korean War allowed both North Korea and South Korea to have one town each in the area.

Only people who resided in this wide, flat valley before the Korean War may continue to live here. Every day, they look out their windows and see the country&#8217;s division, where 1.7 million soldiers on either side are poised for war.

They work on rich farmland, rolling rice fields planted just in front of the communist country that has experienced chronic food shortages and famine.

His ease may be tied to the armed soldiers from the U.N. Security Battalion who patrol the village.

Led by Lt. Col. Matt Margotta, the unit&#8217;s South Korean soldiers provide security for the residents, whom the North Koreans are fond of harassing. The official border between the two Koreas runs close to Tae Sung Dong residents&#8217; farmland, putting them at risk for abduction.

Because of language barriers, U.S. soldiers do not patrol the village itself but monitor the area. If hostilities occurred, the battalion would evacuate the residents, Margotta said.

When asked if the North Koreans make him nervous, Capt. Lim Jong-kyu, who leads the security patrol here and speaks English, said &#8220;yeah&#8221; with a smile. Members of his patrol occasionally warn North Korean soldiers straying near the border to stay away.

But it doesn&#8217;t always halt them from bugging the residents.

Last May, two North Korean soldiers crossed the border, gesturing and shouting at some locals. The residents were not harmed, but the soldiers snatched a plastic lawn chair as a trophy.

To maintain residency, the Korean government requires people to spend 240 nights a year here. They must be in their homes with locked doors by 11 p.m., and soldiers conduct nightly door-to-door checks.

When farmers head to the fields, they must check in with the military. Soldiers escort farmers, as some fields come within a few feet of the Military Demarcation Line, the official border.

Feathers are sometimes ruffled: Farmers want to be in their fields from sunrise to sunset, but the security battalion has limited personnel, Margotta said. The rules are rough on the residents, but relations are generally friendly, he added.

But there are a few benefits.

Residents pay no taxes to the South Korean government, and they are termed &#8220;refugees&#8221; from the war. They&#8217;re not considered residents of either Korea, Margotta said, but have South Korean passports.

Rarely opened to journalists, the village is touted as a front-line symbol of South Korea&#8217;s vibrant economy and democratic freedoms, Margotta said.

Just across the official border is Gijong-dong, North Korea&#8217;s permitted village. It has empty, windowless buildings and is only frequented by North Korean soldiers.

Another feature of Gijong-dong: Giant speakers that play patriotic North Korean songs, designed to lure their wealthier southern counterparts across the line.

But when U.S. soldiers peer into North Korea at night, they see hardly any light, another sign of the country&#8217;s acute energy shortage. Only a statue of Kim Il Sung, North Korean leader Kim Jong Il&#8217;s father, known as the &#8220;Great Leader,&#8221; is lit in the city of Kaesong, within site of the border, Margotta said.