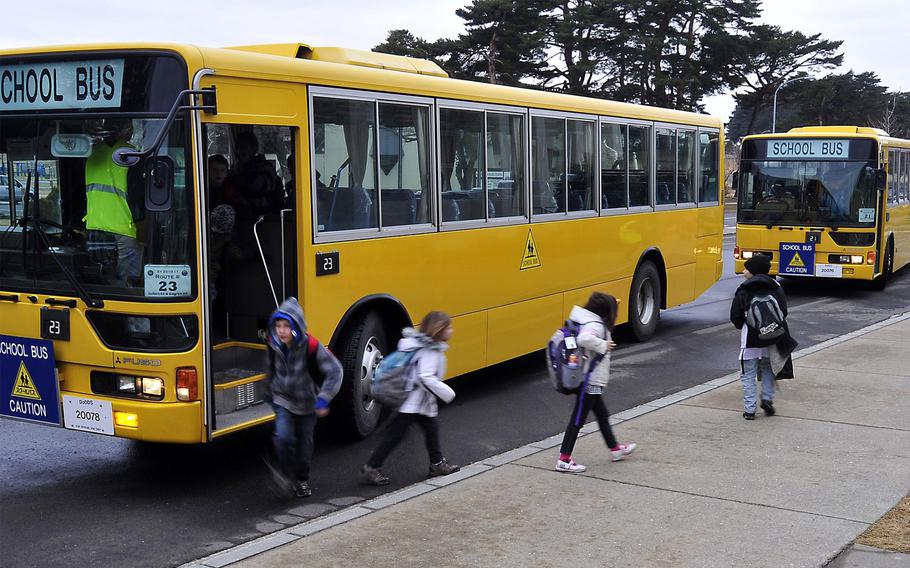 KAISERSLAUTERN, Germany — Educators and parents welcomed the defense secretary’s announcement that teachers and school support staff would not be furloughed this fall.

“I think it’s great the furlough was lifted,” said Nancy Bresell, the Department of Defense Dependents Schools-Europe director, in an interview Wednesday. “It shows a true appreciation on the part of the secretary of defense and his chain on the importance of education and how critical it is to have kids in school. We really appreciate that decision.”

The school furlough would have affected about 11,000 DODEA educators and support staff and 84,000 children worldwide, including nearly 57,000 overseas, and would have meant military schools would have lost five days this fall.

Some schools on Wednesday had already begun to revise their online calendars to reflect 183 scheduled school days, instead of 178.

The reprieve for DODEA educators and support staff was part of a broader announcement by Secretary of Defense Chuck Hagel that furlough days for most of the Defense Department’s nearly 800,000 civilian employees will be cut from 11 to six.

In a memo to Pentagon officials, Hagel explained that DODEA instructional and support staff on 10-month contracts had been subject to only a five-day furlough “in order to ensure a creditable year of schooling for our students.” DODEA needs a minimum of 175 school days to meet accreditation standards, according to DODEA officials.

“Now the teaching year will not be reduced at all,” Hagel wrote.

In a background briefing with reporters Tuesday at the Pentagon, a senior defense official clarified that “the school year for fiscal year ’13 will not have any furlough days. We are really trying not to furlough in fiscal year ’14, but we haven’t received a budget yet.”

The first day of school for students at most military schools overseas is Aug. 26. Some military schools stateside are already in session. In Europe, teachers are expected back Aug. 21; the first furlough day had been scheduled for Aug. 30.

Parents interviewed Wednesday said they were thrilled to know that schools would not face an almost immediate disruption to school schedules, relieving working families of the pressure to find day care or alternative activities for their children.

“For me, it’s good news,” said Michelle Harton, the mother of a third-grader at The Sullivans School on Yokosuka Naval Base in Japan. “Even if the kids aren’t in school, we come to work. So what was I supposed to do? I was thinking about it.”

Harton contrasted the Japanese educational system, which is considerably longer and includes weekend study, to the shrinking school year that base communities faced prior to the furlough cancellation.

“We’re supposed to be improving the educational quality for the kids, and instead we were taking it away from them,” she said.

In Germany, longtime educator Terese Sarno, who teaches third grade at Ramstein Intermediate School and serves as the Federal Education Association’s Kaiserslautern district representative, said “We’re very happy that DOD has understood that closing schools to save money was not a good choice.”

“Education cannot be equated with office work, where items can be put on hold and worked on when people return to the office,” she said.

Sarno said FEA, the teachers’ union, “worked tirelessly to cancel the furlough days and was successful in getting a positive result that will benefit our students.”

In a statement, FEA President Chuck McCarter said, “Let’s hope lawmakers and the Pentagon realize how close they came to doing real damage to classroom learning in our schools and never again consider shortchanging military dependents of the education promised to them as a viable option for fixing politically manufactured budget issues.”

Bresell said it would have been difficult to make up those five days. “When you look at five days of instruction time in each subject, kids would have been missing some critical information.”

Teachers are being notified this week of the furlough cancellation, school officials said.

They will be expected to report for work on the previously scheduled furlough days, Bresell said, but teachers will likely have the option of taking leave if they’ve made plans that “are impossible to change,” Bresell said.

School officials in Europe are looking at how to handle Aug. 30, the first scheduled furlough day, which is also a “training holiday” for U.S. Army Europe and a “family day” for U.S. Air Forces in Europe.

“We may use that day as one of our teacher professional development days and do some training that we may have to do,” Bresell said.

Stars and Stripes reporters Chris Carroll in Washington, D.C., and Erik Slavin in the Pacific contributed to this report.