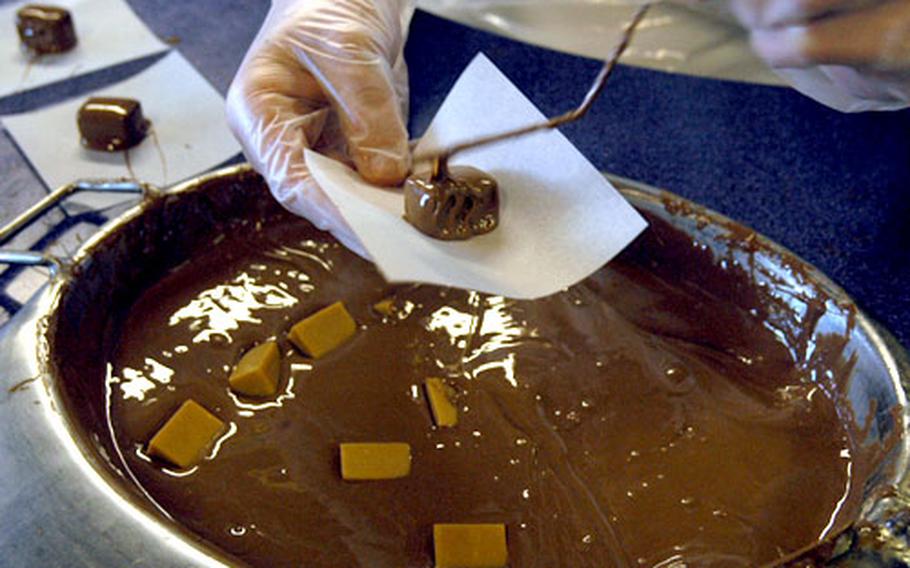 A worker in the demonstration area of Cadbury World hands out samples of fudge dipped in warm, liquid chocolate. (Ben Murray / S&S)

A worker in the demonstration area of Cadbury World hands out samples of fudge dipped in warm, liquid chocolate. (Ben Murray / S&S) 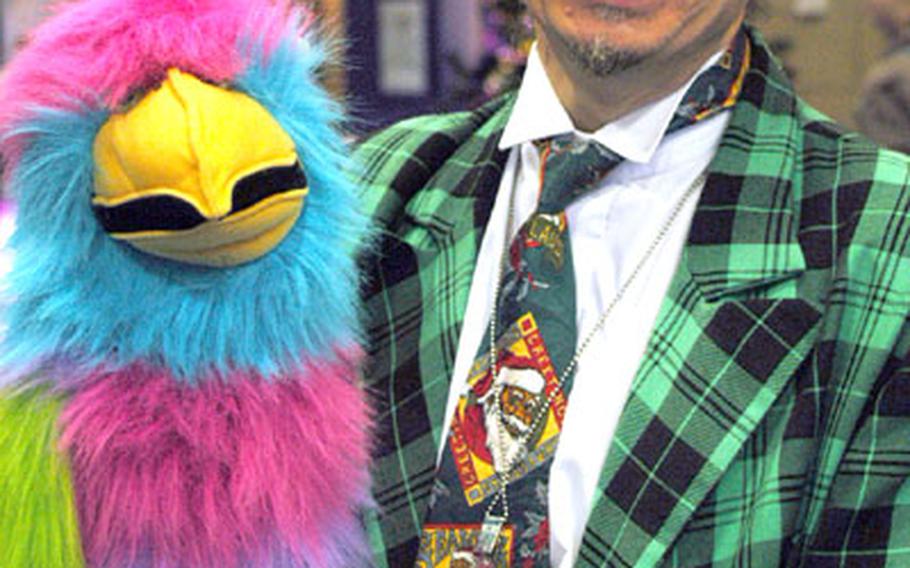 The host at Cadbury World greets visitors with a loud suit and a colorful hand puppet before ushering them into the self-guided tour. (Ben Murray / S&S) 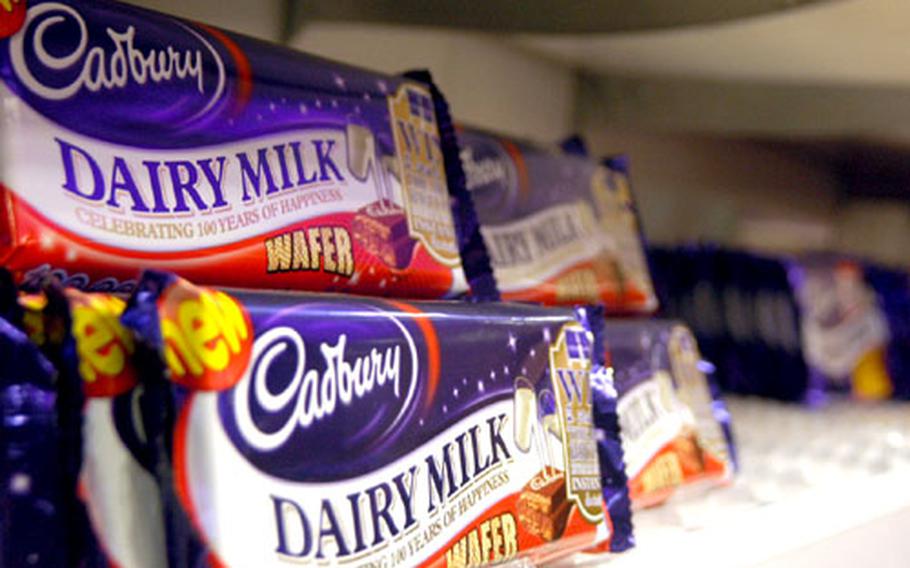 Row after row of chocolate selections, from bags of bite-sized treats to candy bars the size of a skateboard, meet visitors to the Cadbury shop at the end of the factory tour. (Ben Murray / S&S) 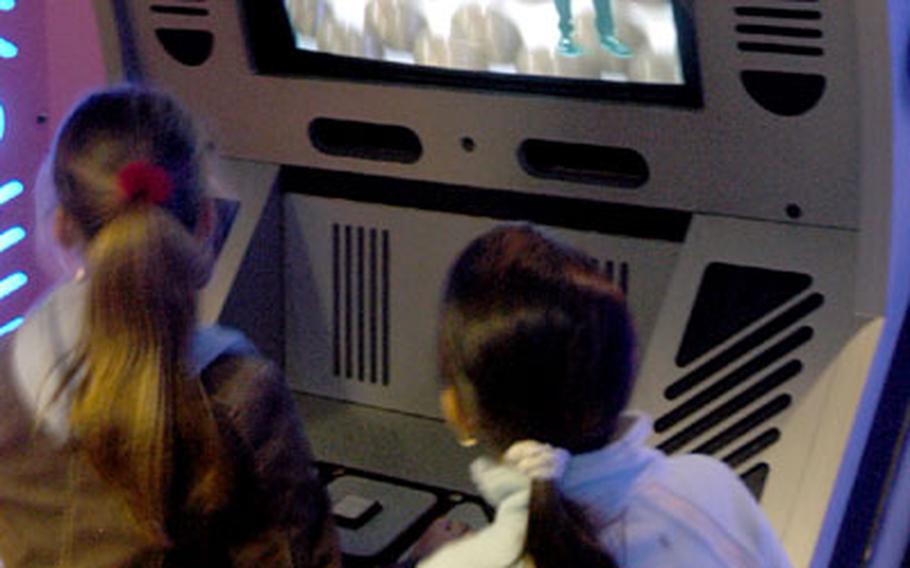 Two girls watch rows of candy rush past in a video showing how some of Cadbury’s most popular candies are mass-produced at the Birmingham plant. (Ben Murray / S&S) 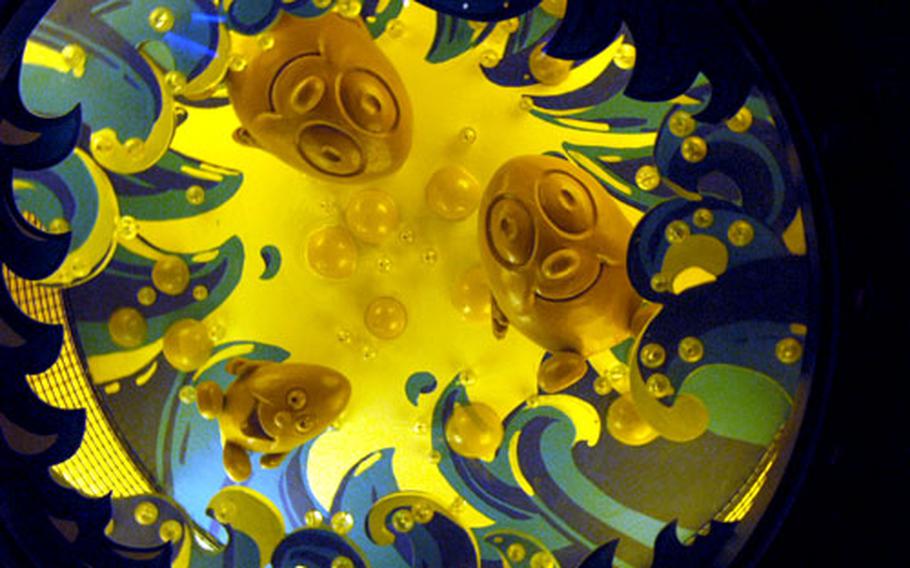 Frolicking in a washing machine on the way to becoming chocolate, the cocoa-bean mascots of Cadbury World receive a scrubbing in the Fantasy Factory. The display is meant to show kids the process through which the Cadbury candy is made. (Ben Murray / S&S)

BIRMINGHAM &#8212; You know your trip to the candy plant has gone a little strange when you push through the doors that you think will lead you to vats of boiling chocolate and find yourself in &#8230; an Amazonian rain forest.

Inside it&#8217;s warm and muggy and there are creepy, shadowy Aztec mannequins staring out at you from the foliage. It is here, you are informed in the &#8220;Origins of Chocolate&#8221; walkthrough, that a handful of cocoa beans once bought you a human slave.

Excuse me, a what?

So starts the strange and often stupefying two hours that is a tour of Cadbury World, the manufacturing headquarters for one of the world&#8217;s most popular chocolate lines.

Set on the fringe of an industrial city and secluded behind brick walls and iron gates, it has all the elements that a mysterious and potentially dangerous chocolate factory ought. Brightly colored fixtures and plush carpets greet visitors in a foyer where a man in a green suit and top hat welcomes ticket buyers.

Willy Wonka is the star of the Roald Dahl book &#8220;Charlie and the Chocolate Factory&#8221; and the movie adaptations.

But step inside Cadbury World and you commit yourself to a long, self-guided tour that is by turns tedious, mystifying and disappointing for adults, with just brief flashes of marvel and delectability.

For those expecting a stroll through the complex machinery and eye-popping robotics that have rendered Oompa Loompas obsolete, it would be wise to heed the Cadbury Web site&#8217;s answer to the question, &#8220;Is it a factory tour?&#8221;

Instead the tour begins in the fake Amazon basin, where cocoa was first cultivated, then moves swiftly into a yawn-inducing 3-D video display on how it was shipped to Europe and became popular among aristocrats.

Moving on, visitors enter a re-created London street circa 1870, where John Cadbury (in the form of a video projection of an actor&#8217;s head) talks about how he grew up as a Quaker and fell into the sweets business.

This leads into a small theater that offers the promise of a Disney-like animatronics show, but ends up as a lengthy piece of historic drudgery about the chocolate company and its various owners, again delivered by Cadbury&#8217;s grim, disembodied head.

Another theater follows, where the basics of modern chocolate production are (finally) covered in a short video, and the seats are rigged to rattle along with the machinery.

Post-movie, you finally get to the center of the tour, where video consoles show how popular chocolate products are cooked, cooled and packaged in vast quantities by amazing machines.

The fascination lasts throughout the next portion, where visitors view chocolates actually being wrapped and boxed for shipment at lightning speed, but is instantly killed off by the line for &#8220;Cadabra!,&#8221; the plant&#8217;s unavoidable &#8220;Small World&#8221;-style ride.

Interest spikes briefly again after the ride in the &#8220;Demonstration Area,&#8221; where free samples of liquid chocolate are handed out. But that is followed by the perplexing &#8220;Cadbury and TV&#8221; section, centered on the company&#8217;s commercials, before the finale, the &#8220;Fantasy Factory,&#8221; a tiny playland for kids.

The final stop of the tour is the Cadbury shop, where visitors can supplement their freebies with literal armloads of chocolate.

All in all, Cadbury World is a place that might be good for the kiddies, who tend to race through it high on sugar, but with the price of a golden ticket going for 10.50 pounds for adults, it brings to mind the words of Wonka himself: &#8220;So much time, so little to do.&#8221;

Hours: Cadbury World has no uniform opening times, but is generally open 10 a.m. &#8211; 4 p.m. on weekdays, with slightly extended hours on weekends. It is closed for most of January.