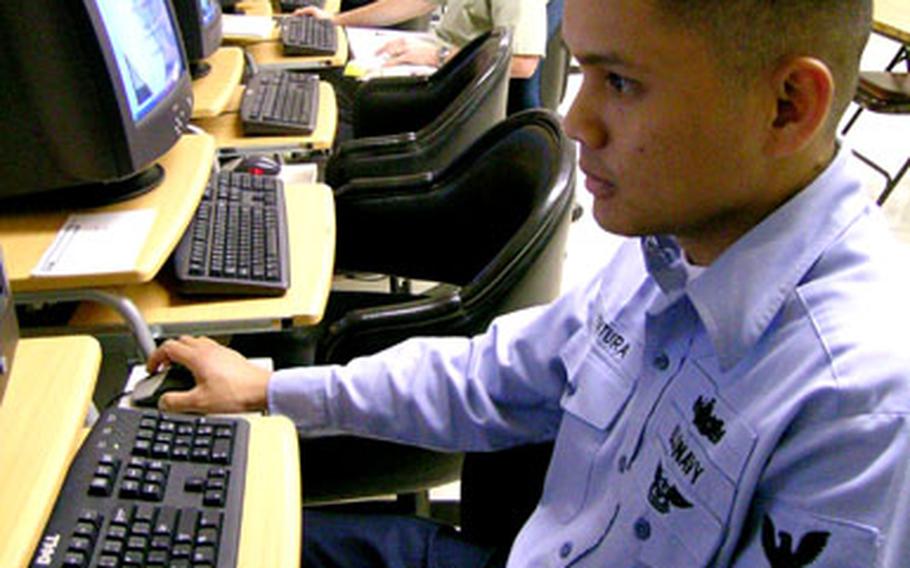 Petty Officer 1st Class Barry Ventura is a student at University of Maryland University College. The institution is one of six that will be represented next week at a traveling education fair at Yokosuka, Atsugi, Ikego and Negishi. (Allison Batdorff / S&S)

The sailor left knowing he was one class away from a bachelor&#8217;s degree, even though he&#8217;d never attended college.

And a petty officer second class turned out to be a mere six credits away from an associate&#8217;s degree, McCormick said.

McCormick said he&#8217;s seeing more interest in higher education in the service &#8220;due to sailors having a greater knowledge of what&#8217;s available.&#8221; Navy College in Yokosuka gave $2.5 million in tuition assistance and had students in 169 colleges worldwide in fiscal year 2005, he said. Another $1.7 million in tuition assistance has been given so far this year.

The Navy also is placing more emphasis on education, he said.

In 2011, all sailors will need a minimum of an associate&#8217;s degree to make senior chief petty officer. And, while the mandate won&#8217;t take effect for six years, sailors need to start planning now as associate&#8217;s degrees outside their technical field will be grandfathered in only until Jan. 1, 2008, and Navy officials already are attempting to avoid a last-minute crush of sailors trying to beat the deadline, McCormick said.