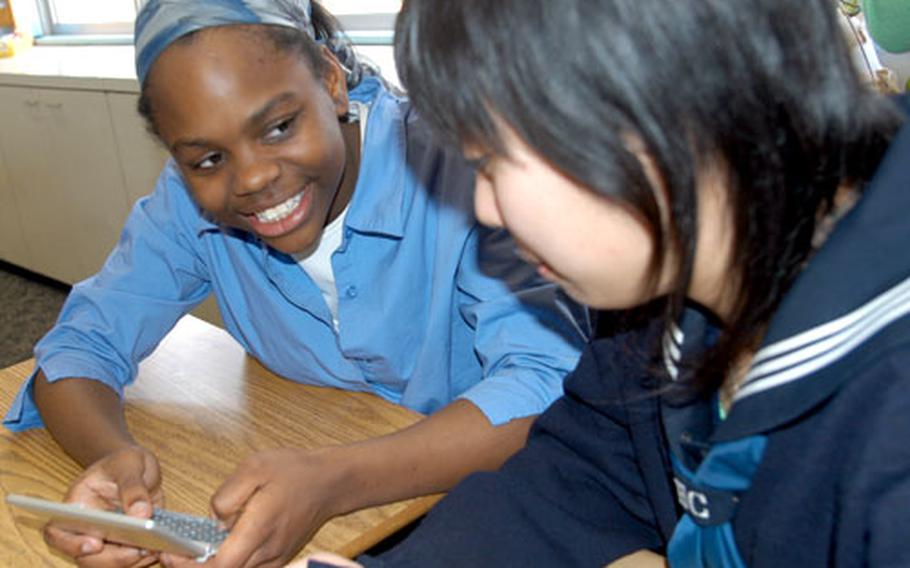 MISAWA AIR BASE, Japan &#8212; The most noticeable difference was appearance and noise level.

The 10 girls from Hachinohe Commercial High School wore navy-blue sailor-style uniforms, and hair trimmed at or above the shoulders. Among the Edgren High School teenagers, some sported blue hair, metallic belts, flowery bandanas and blue jeans.

But talk the Japanese teenagers did during their visit Tuesday to Edgren, a rare chance to sample American high school life and practice their English with native speakers their own age.

Teacher Missy Murphy&#8217;s Advancement Via Individual Determination (AVID) students hosted the group. They took their guests to biology, Spanish and English classes; shared pizza in the cafeteria; challenged them to basketball and volleyball; and divided into groups to answer their questions.

The communication wasn&#8217;t seamless. Terashita whipped out her digital translator when ninth-grader Kenya Jenkins asked her about her religion. She keyed in a few characters and the screen flashed &#8220;Buddhism.&#8221;

Religion popped up again when Angel Lemen told Mikuko Miyazaki she wanted to be a minister. After Murphy explained the vocation, Miyazaki nodded, &#8220;not prime minister&#8221; then?

They discovered some differences: The Americans, for instance, wrinkled their noses at the Japanese staple natto (fermented soy beans). But mostly they found common ground in teenage interests and concerns, from body image to boys. Terashita told Jenkins if she could go anywhere in the world, it would be to America. &#8220;What, because of the boys?&#8221; laughed Jenkins. &#8220;No,&#8221; insisted Terashita. &#8220;Next question.&#8221;

The Hachinohe group began studying English in seventh grade: It&#8217;s integrated into their international economics curriculum and they&#8217;re also in English club after school. Antonise Golabek, an assistant language teacher with the Japan Exchange and Teaching program, found that students in their English studies tend to be consumed with American pop culture &#8212; what&#8217;s the cool thing to wear, what&#8217;s Britney Spears doing &#8212; but &#8220;it&#8217;s a start. Any interest is good,&#8221; she said.

Next year, English will be introduced in third grade as part of a Japan-wide push to improve students&#8217; English language abilities, said teacher Akiko Ohtaka.

Earlier this year, some AVID students visited the Hachinohe school, where they wore slippers to class, shopped at a school bazaar and ate really good food, they recalled. Murphy said both schools want to expand on the exchange.