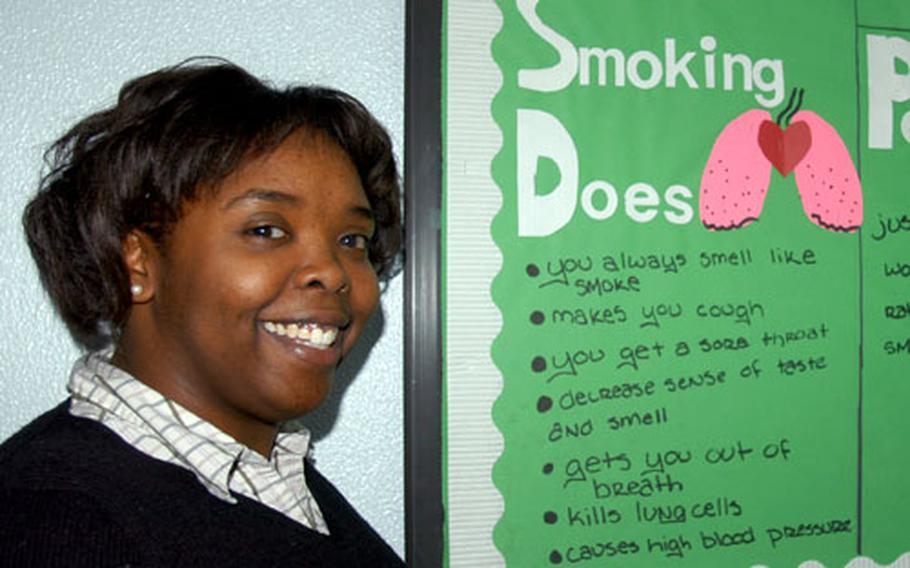 Alicia Witherspoon, the Adolescent Substance Abuse Counseling Services counselor at Edgren High School on Misawa Air Base, Japan, stands outside her office in front of a bulletin board her students designed to discourage nicotine use. (Jennifer H. Svan / S&S)

MISAWA AIR BASE, Japan &#8212; Greeting a seventh-grader in the hallway who complains about being tired, Alicia Witherspoon inquires how late he stayed up the night before. Till midnight talking with his brother, he says, lingering for a moment outside his next class at Edgren High School.

Witherspoon isn&#8217;t the school&#8217;s resident sleep expert. But as a social worker certified as an addictions specialist, she strives to help students make healthy life decisions, from getting enough sleep to fending off peer pressure to smoke or drink.

As the Adolescent Substance Abuse Counseling Services (ASACS) counselor at Edgren, Witherspoon focuses on alcohol- and substance-abuse education, treatment and prevention. Most major U.S. military bases in the Pacific have an ASACS program. Since the Army began it about 13 years ago, it&#8217;s spread to the other services at overseas locations, where resources are limited for adolescent substance-abuse intervention, Witherspoon said.

Though Witherspoon keeps an office at Edgren, she is available to help any 12- to 18-year-old on base with alcohol or substance abuse issues. She also works with parents of teenagers and is holding a two-part class just for them in January.

The second half of &#8220;Parenting Teens for Success&#8221; will be held from 5:30 p.m. to 7 p.m. Jan. 25 at the high school. Five parents attended the first class last week, during which Witherspoon discussed the ASACS program, the effect of drugs and alcohol on an adolescent&#8217;s developing brain and substances that are available at Misawa. Class surveys indicate students most commonly use alcohol, nicotine and inhalants, Witherspoon said. She&#8217;ll review those topics for parents who missed the first class, if they wish.

One focus of the second class will be communication skills &#8212; &#8220;giving parents strategies to bridge that gap from childhood to adolescence,&#8221; Witherspoon said. It&#8217;s normal for parents to have trouble communicating with their teenage sons or daughters, who typically are trying to assert independence. But the stress of military life can compound the problem.

Parents may have to re-examine their parenting style to allow their child some independence while also delivering effective discipline, Witherspoon said. If their teenager isn&#8217;t comfortable confiding in them, it&#8217;s important that they have someone to talk to who is trusted by both child and parent, she added, whether it&#8217;s a family friend or a relative in the States.

Witherspoon also will ask parents to fill out a needs assessment about programs or workshops they&#8217;d like to see taught at Misawa.

For more information about ASACS or to sign up for the parenting class, call Witherspoon at DSN 226-4250.