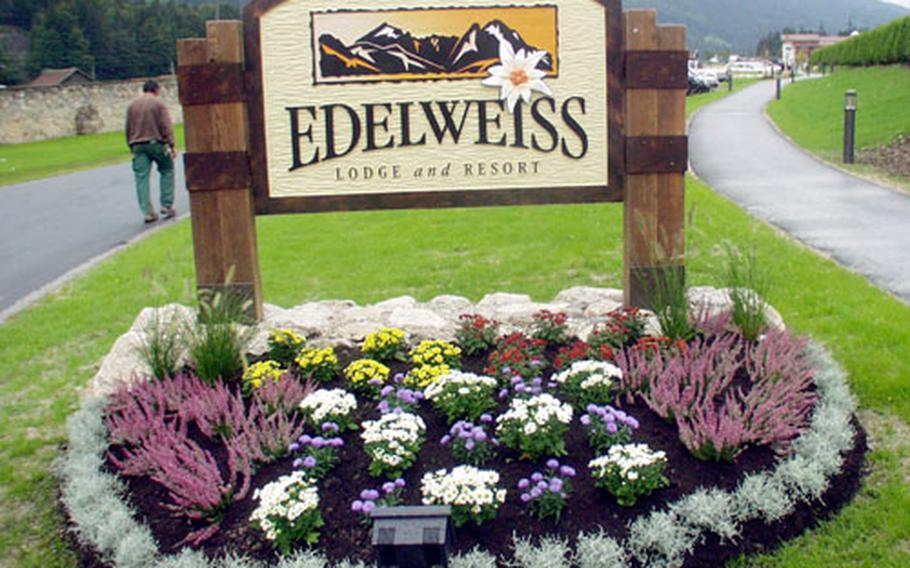 Armed Forces Recreation Centers took a risk by borrowing $80 million to build the Edelweiss Lodge and Resort. The 330-room hotel in Garmisch, Germany, replaced three venerable AFRC hotels in southern Germany and there was no guarantee that the new hotel would fly.

But in its first year, the Edelweiss performed better than expected, according to AFRC officials.

About 84 percent of available rooms are already booked for its second year, LeBrun said.

The hotels, as well as their AFRC counterparts in Florida, Hawaii and South Korea, are used by U.S. troops, Defense Department employees and retirees, and other eligible guests.

LeBrun credited the new facility itself for the booming business.

The old AFRC lineup in Europe included the General Patton and Von Steuben hotels in Garmisch, and the Park and Lake hotels in Chiemsee, and had a total of 337 rooms, compared with the Edelweiss&#8217; 330.

But the old AFRC hotels, which closed in 2003 and 2004, offered only rooms and no bells and whistles.

The hotel has three restaurants, a swimming pool with Jacuzzis, and a fitness center, and offers hiking, skiing, bus tours and other activities.

The Edelweiss has made adjustments along the way, LeBrun said. Breakfast hours were made later on weekends. An a la carte restaurant was changed to buffet- style, pay-one-price. The juice bar at the fitness center was made into a grab-and-go snack bar.

Weekly meetings are held to decide what needs to be tweaked.

Business has been profitable, according to Peter Isaacs, AFRC&#8217;s chief operating officer. The Edelweiss earned $1.3 million in net income before depreciation in its first year on $23.5 million of total revenue.

AFRC borrowed $135 million in all, for construction of the Edelweiss as well as expansion of its Shades of Green resort in Orlando. It&#8217;s a 30-year loan.

About 32,000 guests have come through the Edelweiss as part of the resort&#8217;s Rest and Recuperation discount-price program. Some are on two weeks&#8217; leave, after which they return to Iraq or Afghanistan.

LeBrun said his staff has taken training to be sensitive toward troops who have been downrange.

LeBrun said the troops who have to return downrange go to bed early, don&#8217;t necessarily patronize the lounge, and work out and eat a lot.

Others are on 30-day block leave, having already finished their tours.

But the Edelweiss, which cost $80 million to build, faced controversies in its first year.

In May, Stars and Stripes ran a story in which some hotel employees complained that the hotel was understaffed and their workloads were far beyond what were led to believe when they were recruited.

Richard LeBrun, the hotel&#8217;s general manager, said that business was greater was anticipated, as was the workload.

&#8220;All of the staff worked very, very hard,&#8221; LeBrun said. &#8220;In the first six months we were making changes to daily operations, and over a period of time that can put a strain on the morale of the staff.

&#8220;The hospitality business is hard work. No matter how you cut it, working in a hot kitchen and making beds is hard but noble work.&#8221;

In September, the hotel&#8217;s director of contracting, Steven G. Potoski, was arrested and charged with taking more than $350,000 in bribes from contractors in exchange for granting them construction contracts.

Peter Isaacs, chief operating officer for Army Community and Family Support Center in Washington, which oversees the resorts and the Army&#8217;s Morale, Welfare and Recreation programs, said he could not comment because of the Justice Department&#8217;s ongoing investigation.

Isaacs said no other AFRC employees had been arrested in connection with the case.