Edelweiss brimming with guests in spite of flooding at Garmisch 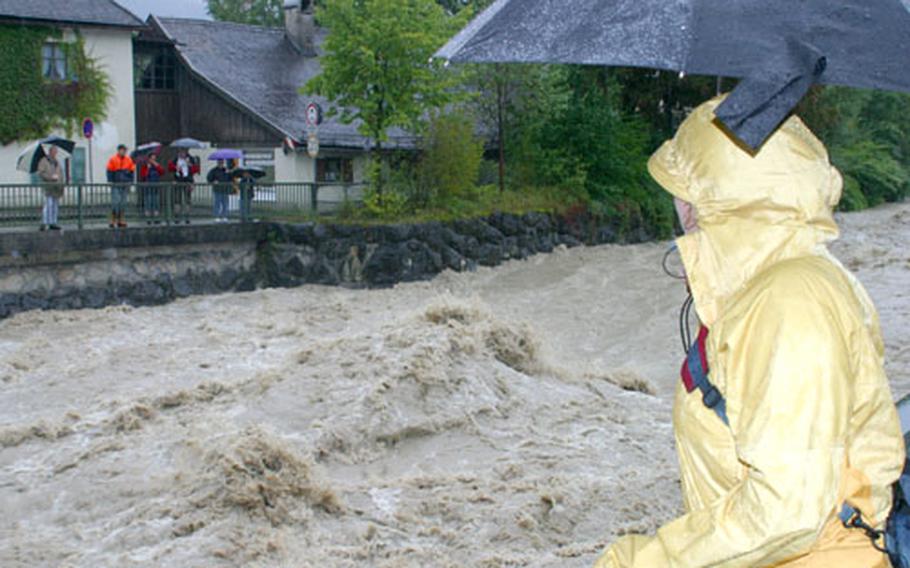 Onlookers watch the Loisach River rush through the village of Garmisch, Germany, on Tuesday. (Photo Courtesy of Brad Hays)

But the staff at the Army-owned resort scrambled to accomodate all the guests, according to general manager Richard Le- Brun. Guests who were scheduled to leave Tuesday were forced to stay and pay for another night, and the few inbound guests who arrived were able to get a room.

Food sales were 25 percent higher than normal because guests were stuck at the hotel and unable to go into town, LeBrun said. Some staff volunteered to work extra hours and shifts to handle the overflow.

Five inches of rain fell in Garmisch in the 24 hours ending at 11 a.m. Tuesday, the most since 1949, when the U.S. military began keeping records. The forecast calls for more rain, along with clouds and sunny intervals, through the weekend, according to Maj. Steve Callis of the U.S. Air Forces in Europe Operational Weather Squadron in Sembach, Germany.

The Loisach River, which bisects Garmisch, and the nearby Hacker River overflowed Tuesday in places just outside the village, leaving Garmisch &#8220;an island,&#8221; as one police officer said.

But some roads reopened Wednesday, enabling some travelers to be on their way, albeit via detours.

The Patton Hotel, which was closed after the Edelweiss opened in September, had its heat and water turned on, LeBrun said, and bed linens were arranged in case the Patton needed to house an overflow of guests, which turned out not to be necessary.

The most damage inflicted to a U.S. facility was to the Alpental Golf Course, north of the village.

He added that the levee that separates the golf course from the Loisach River did not break, and therefore the trees, bushes and rocks from the floodwater did not spill over onto the course.

Edelweiss&#8217; Vacation Village, a nearby cabin campground that was fully occupied with 100 guests, was completely saturated, but not flooded.

Other U.S. facilities in the Bavarian Alps village returned to business as usual on Wednesday. German military and civil teams were performing relief efforts in the area, according to Gregory Holzinger, director of the Garmisch Area Support Team, which oversees U.S. properties in the area.

Authorities tallied the aftermath of storms that killed 34 people in the region over the past week. Worst hit was Romania, with 25 dead and thousands of homes inundated. Austria, Bulgaria and Switzerland reported a total of nine dead &#8212; though the number could climb as the missing are accounted for.

Parts of the Swiss capital, Bern, were submerged by the deluge, forcing authorities to plan evacuations for more people Wednesday &#8212; by helicopter if necessary. In Germany, Chancellor Gerhard Schroeder promised assistance for those affected by flooding in Bavaria while authorities prepared for rising river levels downstream from the Alps.

Military helicopters airlifted tourists out of some of the hardest-hit areas in Austria, where streets had crumpled beside the swollen rivers.

Holzinger said the Americans had provided some road barriers for traffic control and allowed access to their helipad, which was used by the German army to fly in three teams of troops.

But Holzinger said that his people hadn&#8217;t yet been asked to help with cleanup and said the Germans seemed to have things under control.

Joe Ferrare, a spokesman for the George C. Marshall European Center for Security Studies, located next to the Edelweiss, said floodwaters came within a few hundred yards of the property but did no damage. No classes were in session at the time.

LeBrun said that the Edelweiss staff served 1,661 meals on Tuesday. Movie theaters were set up in the ballrooms, and additional child care &#8212; called Kids Night Out, with face-painting, balloons and games &#8212; was arranged so parents could spend time alone.

LeBrun said a 14-seat shuttle bus ferried Edelweiss employees back and forth from their living quarters on the other side of town into work to help ease the strain on inconvenienced guests.