Edelweiss: At Garmisch ski resort, a little R&R for the entire family Spc. Juan Colon of 7th Battalion, 159th Aviation Regiment, out of Illesheim, Germany, relaxes with 21-month-old Joshua Martinez, the son of another Illesheim-based soldier, at the Edelweiss Lodge and Resort in Garmisch, Germany. Colon was on block leave following a one-year deployment to Iraq. (Charlie Coon / S&S)

Spc. Juan Colon of 7th Battalion, 159th Aviation Regiment, out of Illesheim, Germany, relaxes with 21-month-old Joshua Martinez, the son of another Illesheim-based soldier, at the Edelweiss Lodge and Resort in Garmisch, Germany. Colon was on block leave following a one-year deployment to Iraq. (Charlie Coon / S&S) 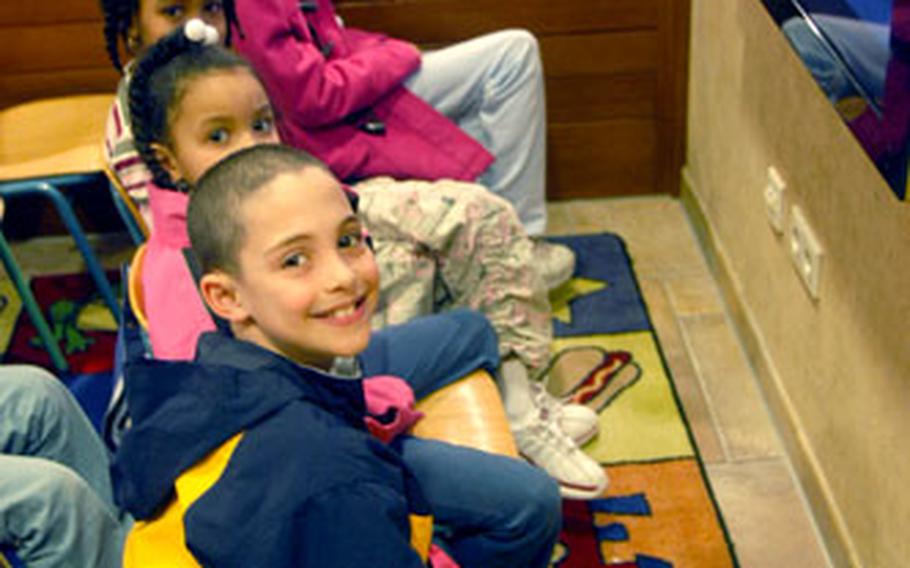 Children are temporarily diverted from watching a movie during Kids Night Out, a program under which they are supervised by staff members so their parents can have some time alone. (Charlie Coon / S&S) 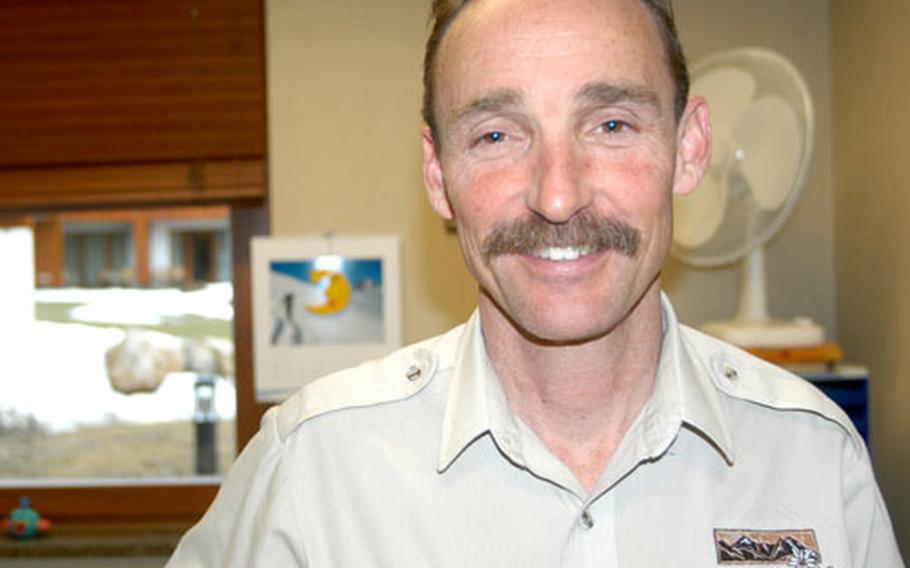 Leigh Plowman, recreation director at at the Edelweiss Lodge and Resort in Garmisch, Germany, said more guests are opting for shorter, half-day activities such as hiking or horse-drawn carriage rides through town. However, the old favorites — kayaking, rock climbing, skiing — still are available for the more adventurous. (Charlie Coon / S&S)

GARMISCH, Germany &mdash; Times have changed for Americans in Garmisch.

The town used to be a playground for young, single soldiers. They&rsquo;d ride kayaks, climb rocks and bomb down ski slopes, often coming as a unit and calling it &ldquo;adventure training.&rdquo;

Basically, whooping it up on the taxpayers&rsquo; dime, before the Army started drawing down from Germany in the 1990s.

Young soldiers still come to Garmisch. But these days it&rsquo;s often as part of the military&rsquo;s rest and recuperation program, or R&R. Wars are being fought in Iraq and Afghanistan, and many troops are looking for a place to unwind. Many use the Edelweiss Lodge and Resort to do so.

And they&rsquo;re taking their families.

&ldquo;It was like a prison,&rdquo; Spc. Juan Colon said of his one-year deployment to Afghanistan during a recent R&R stay at the Edelweiss. &ldquo;I just want to relax, forget I was over there, forget I&rsquo;m part of the military for a while.

&ldquo;To unload everything I experienced over there and become a husband and father again, and spend time with the kids.&rdquo;

The Edelweiss, an $80 million, Army-owned hotel that opened in September 2004, and its predecessor, the Von Steuben Hotel, have hosted more than 30,000 troops and family members in the past 2&frac12; years.

&ldquo;I have three kids,&rdquo; said Autumn Martinez, wife of Spc. Alex Martinez, who also had recently finished a one-year stint in Afghanistan. &ldquo;It&rsquo;s helped me to be relaxed, have fun and not worry about cooking and cleaning. It&rsquo;s great. We&rsquo;ve had just a wonderful time.&rdquo;

&ldquo;It gives us a break from the military life,&rdquo; said Julie Colon, wife of Spc. Colon. &ldquo;I know it&rsquo;s an Army hotel but it doesn&rsquo;t feel like it.&rdquo;

Both Juan Colon and Alex Martinez are based in Illesheim, Germany &mdash; Colon with the 7th Battalion, 159th Aviation Regiment, and Martinez with the 2nd Squadron, 6th Cavalry.

Chilling in the vast Edelweiss lobby, they and their families are part of the changed look of Garmisch.

That&rsquo;s the idea, according to Edelweiss management.

The 330-room hotel was built with young soldiers in mind, according to Richard LeBrun, the hotel&rsquo;s general manager.

It&rsquo;s priced, at least for troops on R&R, to be affordable. A two-night stay, including two breakfasts and dinners, costs $90 for singles, or $120 for two people. Youth ages 13-17 cost an additional $18 each. Children 12 and under stay free.

&ldquo;It&rsquo;s a very great price,&rdquo; said Colon, who has a 5-year-old son and 8-year-old daughter.

On any given night, 30 to 50 rooms are occupied by families on R&R, LeBrun said.

Swarms of kids can often be seen in the evening in the hotel&rsquo;s pool, which was made for frolicking, not swimming laps. Others might be gathered in front of a TV in the lobby, watching a children&rsquo;s movie with members of the hotel staff while their parents get private time together.

Plowman said it costs a lot to train instructors and maintain gear for former favorites such as rock climbing and kayaking. Those activities are now farmed out to local, English-speaking pros.

&ldquo;We&rsquo;re changing our leisure activities to be more affordable and less time-consuming,&rdquo; Plowman said. &ldquo;They can do a three- or four-hour activity in the morning and have the afternoon for themselves, or maybe do another [activity] in the afternoon.&rdquo;

Little hikes for coffee and cake, horse-and-carriage rides through town, and boat rides on nearby lake Eibsee, where guests can relax in the shadow of Germany&rsquo;s highest peak, the Zugspitze, seem to better fit the plans for families on R&R.

R&R participants also get most tours for half-price, Plowman said.

&ldquo;The Partnach Gorge is an awesome hike, really pretty,&rdquo; said Plowman, whose staff took nearly 800 people on the hike in the past two months. &ldquo;In the wintertime, it gets all these frozen icicles. It takes three or four hours and costs 12 bucks.&rdquo;

The R&R theme seems to be working. According to Edward Fagan, the hotel&rsquo;s assistant general manager, there have been only about five times when a soldier from downrange has become distressed enough during his stay to require intervention.

In each case, cooler heads prevailed, Fagan said, and the soldier continued with his vacation.

&ldquo;Sometimes they&rsquo;re searching for some spiritual significance in their life,&rdquo; Pacania said. &ldquo;Others are hurting, spiritually or emotionally. Others are just lonely, and they seek us out just to have some company.

&ldquo;A lot of the soldiers are not stressing on anything. What they do have is what they experience downrange, and they get that off their chest and move on.&rdquo;