Economy factors into decision to stay in, get out 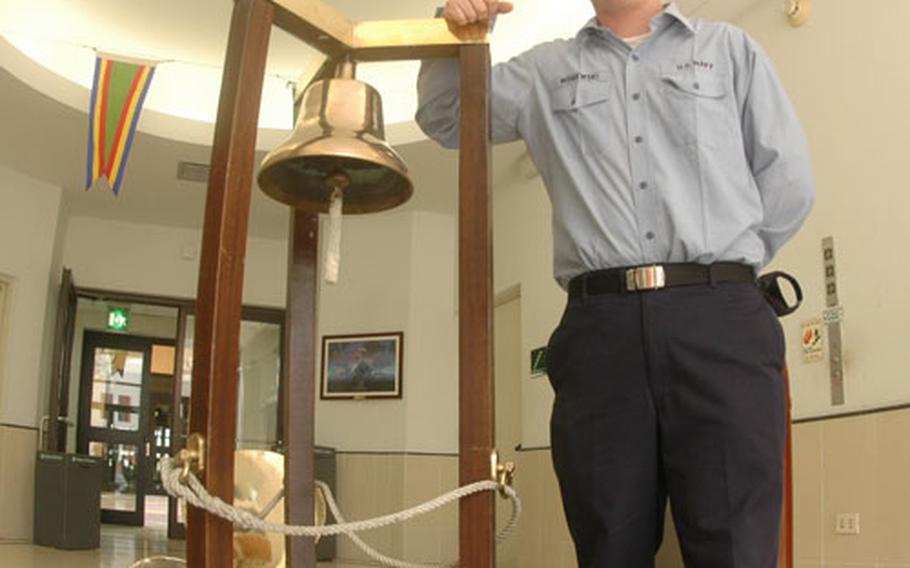 Brad Wisniewski, recently promoted to petty officer third class, is staying with the U.S. Navy. He said he could earn more if he landed a tech job in the civilian sector, but he is not willing to stake his family’s well-being on the instability of today’s job market. (Sandra Jontz / S&S)

He likely could earn more if he landed a tech job in the civilian sector, but he&#8217;s not willing to stake his family&#8217;s well-being on the instability of today&#8217;s job market.

Though armed with an associate&#8217;s degree in business management he earned before joining the Navy three years ago, the Naples-based sailor promised military service in exchange for a stable income even then. &#8220;I couldn&#8217;t afford to keep on going with my college education without having the military help me out.

Wisniewski reached the conclusion to stay in by doing his own research of job prospects, or lack thereof. But a recent study done for the Department of Veterans Affairs paints an equally bleak picture.

Research for the congressionally mandated study found that veterans face more challenges in getting civilian jobs, &#8220;face more economic and employment issues compared to their peers,&#8221; are paid less than civilian peers, and often wield less authority in spite of their career experiences.

Abt Associates Inc., contracted in 2005 by the VA, surveyed 1,941 servicemembers who left active duty between December 2004 and January 2006. The survey responses were coupled with other studies and census data to form the end product. All the respondents were between the ages of 17 and 61, with 37.6 percent between ages 21 to 27.

Eighteen percent of military vets surveyed reported being unemployed; and of those who found work, 25 percent earned less than $21,840 a year, according to the 2007 Employment Histories Survey report, completed in September.

Scare tacticsAt least one soldier in Iraq says he heard a similar doom-and-gloom message during his estimated time of separation, or ETS, briefing at Camp Victory.

During the April 2 brief, a senior noncommissioned officer was introduced as &#8220;being very good at keeping soldiers in the Army,&#8221; Spc. Travis Barnes said in an e-mail to Stars and Stripes.

Then the fire-and-brimstone speech began.

&#8220;Either there is an assumption that soldiers have no idea how to manage their money and time, or people are very hard at work and going to extremes to pursue what I believe is a narrow-minded and institutionalized agenda,&#8221; said Barnes, 29, a five-year veteran who completed a bachelor&#8217;s degree before enlisting. &#8220;Unfortunately, it would appear that misinformation and fear has become a part of the mission doctrine.&#8221;

And with the Army&#8217;s fiscal 2009 budget calling for accelerated recruiting and retention plans, bringing the active-duty force up to 547,000 by 2010 instead of the previous plan of 2012, they do have a mission to meet.

Scare tactics notwithstanding, Barnes said he plans to leave the Army in October, after his stop-loss orders expire.

But one Navy official said the lectures aren&#8217;t infused with scare tactics, but doses of realism.

The Navy&#8217;s Transition Assistance Program aims to educate sailors &#8212; from how to compile a resume or interview for a job to awareness of their Tricare benefits, said Curtis Gilland, Regional Education Services coordinator for Navy Region Europe.

Classes are given to both those retiring or forced out of service, as well as those voluntarily leaving.

The Labor Department provides most of the program content, especially for retirees. Those separating from the service of their own decision receive extra information, such as joining the reserves and capitalizing on Navy College benefits, he said.

Sailors usually attend class about a year out, so those who aren&#8217;t forced to leave have time to ponder their options, he said.

Why stay in?The saturated job market in the States, coupled with a rising unemployment rate and limiting factors of military service, translate into benefits for military recruiting and retention.

According to the Bureau of Labor Statistics, unemployment in March 2008 stood at 4.88 percent, up from 4.4 percent in March 2007, but lower than the 5.5 percent of October 2005, the beginning of that fiscal year.

&#8220;Given the uncertainty in the present economic environment, it remains to be seen if unemployment will continue its upward trend,&#8221; she said.

As for staying in, he said there are &#8220;numerous reasons,&#8221; including the feeling of brotherhood soldiers have for each other. That brotherhood often is made stronger on deployments &#8212; which other soldiers mention as a reason for leaving.

Soldiers who re-enlist downrange also might be eligible for bonuses (most tax-free) as are some of those in critical career fields.

The Navy also offers enlistment bonuses to recruits in specific jobs and for the amount of college credits they have when they join, said Braun.

But for many sailors, it&#8217;s not about the cash, Braun said. The Navy, for example, is working out other perks in its Task Force Life/Work program, perks such as a chance to work from home, more educational benefits and benefits for spouses.

Hard work can pay offTroops who don&#8217;t plan to make a career of the military need to take advantage of the education benefits while they&#8217;re in, said Army Staff Sgt. Mike Tomlinson, a 16-year veteran.

Troops who neglect getting an education only hurt themselves, he said.

&#8220;This also limits their exposure for being marketable for most employers,&#8221; he said.

&#8220;Most credible civilian employers already know that the military hands out almost 100 [percent] free education to its servicemembers,&#8221; Tomlinson wrote in an e-mail. &#8220;Coupled with this information, these same employer&#8217;s (sic) also know that almost 90 [percent] of our nations (sic) two-year colleges and or four-year universities have online distance education courses that the servicemember could be involved with, worldwide.&#8221;

A recent employment histories report prepared for the U.S. Department of Veterans Affairs showed that military members who have recently separated from the service face more economic and employment issues compared to their peers.

Some conclusions from the report:

Recently separated servicemembers who left with higher ranks tended to have higher wages, while those receiving the GI Bill &#8212; a wide-ranging veterans benefits package that includes educational aid and home-loan assistance &#8212; and living in rural areas were less likely to have higher wages. The relationship between using the GI Bill and low wages may be explained by the economic status of the servicemember who chooses to go to school and use this benefit, according to the Abt Associate study.

Although education was not a significant factor in predicting wages, it was a strong predictor of responsibility staying the same or increasing in a civilian job relative to one&#8217;s military occupation.

The marketability of servicemembers is dependent on their training and how well it matches the interests of potential employers.

Even those who continue their education and training with the intent of being more marketable may not be prepared to access desired careers.