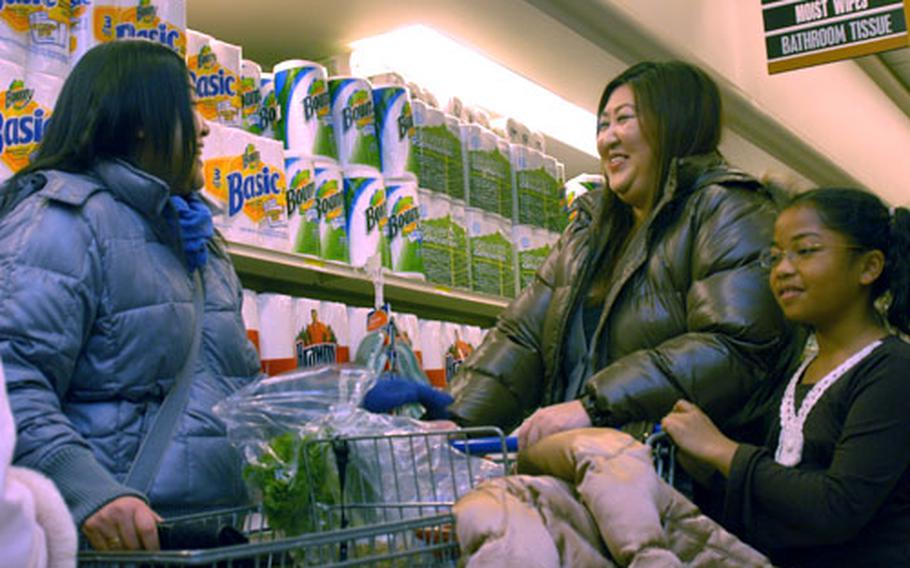 Navy spouses Kiyoko Newton, left, and Hiromi Dunscomb chat Tuesday at the Yokosuka Commissary in front of the paper towel rack. Commissaries worldwide are stocking up on eco-friendly products, like the Seventh Generation paper towels behind the women. (Allison Batdorff / S&S)

Navy spouses Kiyoko Newton, left, and Hiromi Dunscomb chat Tuesday at the Yokosuka Commissary in front of the paper towel rack. Commissaries worldwide are stocking up on eco-friendly products, like the Seventh Generation paper towels behind the women. (Allison Batdorff / S&S) Yokosuka spouse Kazue Peterson shopped for batteries Tuesday next to the light bulb section at Yokosuka&#39;s Commissary. The commissary has stocked up on energy efficient bulbs to be more environmentally friendly and to also help customers save on energy costs. (Allison Batdorff / S&S)

Three days was all it took to sell out of 2,000 reusable grocery bags.

A new shipment was to arrive at Yokosuka Commissary on Tuesday afternoon, and store manager Totolua Ripley Jr. said the new batch of 70-cent, eco-friendly bags would likely disappear as quickly.

What he thought was a novelty item was more mainstream than he anticipated, Ripley said.

He even bought two bags for himself &#8212; one, because they&#8217;re nice, sturdy bags, and two, because they save his employer money, he said.

The Defense Commissary Agency spent $20,635,800 on plastic and paper bags in 2007, according to a news release. The agency would save more than $2 million a year if one-tenth of their customers switched to reusable bags, the release said.

DECA is also flipping the switch on energy conservation worldwide and wants to double the number of compact fluorescent lights sold in 2008, a news release said.

The goal is to sell 1 million of the efficient bulbs to help customers save on energy bills and conserve electricity, the release said.

&#8220;Rising utility costs, coupled with an increasing awareness on the part of our customers about the benefits of conservation, have given us incentive to introduce this &#8216;1-million&#8217; plan,&#8221; DECA&#8217;s acting director, Rick Page, was quoted as saying in the release.

Compact fluorescent bulbs can last 10 times longer than traditional incandescent bulbs, the release said, but customers will pay more upfront and must dispose of them properly, as they contain mercury.

The light bulbs are on the shelves at Yokosuka, Ripley said, and can be used in off-base housing in Japan.

Area commissaries also carry other green products such as paper towels made out of recycled material, and customers often ask him about stocking more eco-friendly products, Ripley said.

The commissary&#8217;s efforts are falling in line with the host-country ethic, as the Japanese are &#8220;big on recycling,&#8221; said reservist and spouse Amanda Cumpston at Yokosuka&#8217;s Commissary Tuesday.