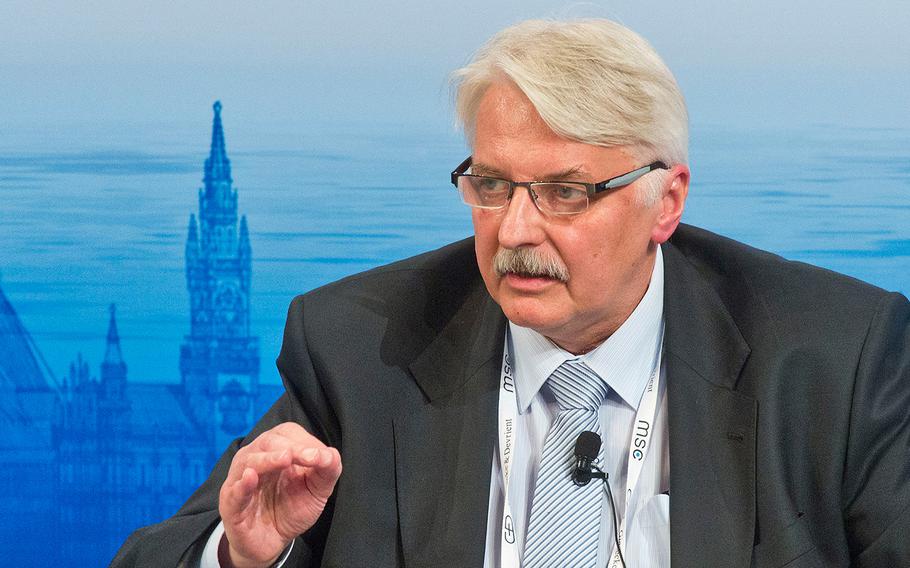 MUNICH — Polish Foreign Minister Witold Waszczykowski warning of a new Russian threat, issued a controversial challenge to the U.S.-led NATO alliance and the hundreds of policymakers gathered here for a conference on global security.

Why have so many troops, garrisons and firepower in western Europe, when the threat NATO faces is in the east?, Waszczykowski asked during a panel discussion Saturday at the three-day Munich Security Conference.

“I think that lack of deployment, lack of troops, lack of defense installations means weakness — and weakness leads to confrontation, and to incidents and provocations,” Waszczykowski said.

Inside the swanky Bayerischer Hof hotel, where heads of state, foreign and defense ministers and experts gathered to frankly discuss security challenges, a Russian diplomat got angry at the talk of NATO’s build up and, from the audience, seized a microphone and offered a rebuttal.

“You understand there are no real threats,” Aleksandr Grushko, Russia’s ambassador to NATO, shouted. “Russia is not interested in any confrontation with NATO, but we will make an assessment of this military planning [by NATO] and take all necessary steps to ensure our security.”

If the civil war in Syria, a refugee crisis and the international battle against the Islamic State group dominated the formal agenda of the annual conference that ended Sunday, the gulf between the West and Russia provided the fury.

With relations between Moscow and Washington at their worst since the end of the Cold War, heightened tensions also raised questions about whether the two sides can come together to solve crises such as the one unfolding in Syria. U.S. and Russian diplomats have attempted to negotiate a cessation to fighting there, but key differences over the plan have raised doubts such an agreement can hold.

Indeed, fears of a new Cold War were brought into focus on Saturday when Russian Prime Minister Dmitry Medvedev accused NATO, with its increased presence of rotational troops in eastern Europe, of an unnecessary escalation.

“NATO’s policy with regard to Russia is unfriendly and opaque. One could say we have slid back to a new Cold War,” Medvedev said. “Sometimes I wonder if it is 2016 we live in or 1962.”

While Russia views NATO’s moves as provocative, NATO sees Russia’s intervention in Ukraine as a watershed moment and part of a broader Russian strategy to upend the post-Cold War order.

U.S. Secretary of State John Kerry on Saturday again called on Russia to get out of Ukraine and help enforce a ceasefire in the country’s east.

“Put plainly, Russia can prove by its actions that it will respect Ukraine’s sovereignty, just as it insists on respect for its own,” Kerry said.

In response to Russia’s seizure of Ukraine’s Crimea Peninsula two years ago, a move that essentially rewrote the map of Europe, NATO has embarked on its largest reinforcement since the fall of the Berlin Wall. The alliance has doubled the size of its quick response force to 40,000 troops, streamlined political decision-making to hasten deployments and intensified the pace and size of its exercises.

“Deterrence starts with resolve,” NATO Secretary-General Jens Stoltenberg said on Saturday. “It’s not enough to feel it. You also have to show it.”

For the West, the question is how to strike the balance between striking a posture of sufficient strength to deter any attempt at aggression without provoking a dangerous escalation with Russia.

As part of that, NATO is now in the midst of an intense debate over what the size and shape of its force in eastern Europe should be. Last week, NATO pledged to enhance its presence in places such as the Baltics and Poland, but final decisions aren’t expected until later this year at a summit in Warsaw.

“My opinion — strengthening of NATO’s presence in our part of Europe is the natural consequence of opening NATO to eastern countries,” Polish President Andrzej Duda told the confereence on Saturday.

For the Poles, Russia’s war with Georgia in 2008 and its 2014 intervention in Ukraine, signal Moscow’s intent to reassert itself in areas that were once part of the old Soviet Union’s area of control, such as the Baltics and Poland.

“We have to take these threats from Moscow seriously,” Waszczykowski said. “We have to be wise before the event. Not wise after the event.”

Some within NATO, Germany in particular, want to take a more cautious approach, avoiding any discussion of establishing permanent bases and NATO military units in eastern Europe. That could constitute a violation of old NATO agreements with Russia about the basing of forces in the east, a deal some other allies argue is now void because of the altered security landscape brought on by Russian actions in Ukraine.

Still, German leaders also see Europe’s post-Cold War period of calm as a thing of the past.

“The question of war and peace has returned to the European Continent, a condition we thought we had overcome, at least in Europe,” German Foreign Minister Frank-Walter Steinmeier said.

Nonetheless, NATO appears to be warming to the idea of more dialogue with Russia. Stoltenberg said he would seek a meeting of the NATO-Russia Council to increase communication.

“Given the complex security environment we face today, I believe we need more defense and more dialogue,” Stoltenberg said. “Political engagement does not mean a return to business as usual. We are in a new reality with Russia.”

As NATO looks to boost its presence in the east, the alliance’s top general said NATO will continue to “demonstrate strength and remain open to dialogue.”

When asked whether NATO has sufficient forces to deter any possible move by Russia against a NATO ally, Breedlove said NATO is ready to defend alliance territory if needed.

“I do believe Mr. [Vladimir] Putin absolutely understands what a NATO country is,” Breedlove said of the Russian president. “We will defend every inch of our NATO territories.”