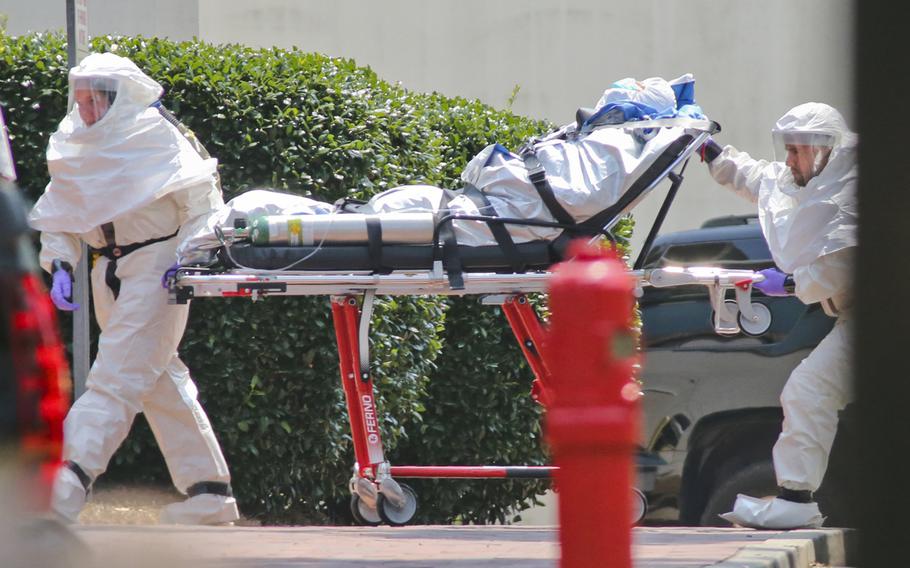 Medical workers roll patient Nancy Writebol, the second American aid worker infected with Ebola, into Emory University Hospital in Atlanta, Ga., on Tuesday, Aug. 5, 2014. Writebol arrived in a chartered jet at Dobbins Air Reserve Base and was then transported to the hospital via ambulance. She will be treated in an isolation unit along with Dr. Kent Brantly, the first American to be infected with the virus. (John Spink, Atlanta Journal-Constitution/MCT)

MANAMA, Bahrain — Government officials here announced Tuesday they were stepping up preventative efforts to avert an outbreak of the Ebola virus that is spreading in West African nations.

Bahraini officials are putting the country on high alert after a man suspected of having the Ebola virus died across the causeway in neighboring Saudi Arabia, Saudi Arabia’s Health Ministry said. The man had recently returned from a business trip to Sierra Leone.

Base officials at the Naval Support Activity in Bahrain didn’t immediately respond to a query on whether the Navy is considering additional precautions here.

Bahrain’s deputy prime minister has ordered the health ministry to “undertake all necessary preventive measures to avert any outbreak.”

Thus far there are no suspected or confirmed cases of Ebola in Bahrain.

Bahraini authorities have temporarily suspended entry visas for visitors from Ebola-hit countries to stave off a potential outbreak in the island kingdom, which is home to the U.S. 5th Fleet and some 8,200 U.S. personnel.

Dubai-based Emirates Airlines has suspended flights to Guinea as precaution. However, the airline said on its website it will continue flights to Senegal despite its proximity to the three affected countries of Guinea, Sierra Leone, and Liberia.