Ebola center built by US military opening Saturday in Liberia 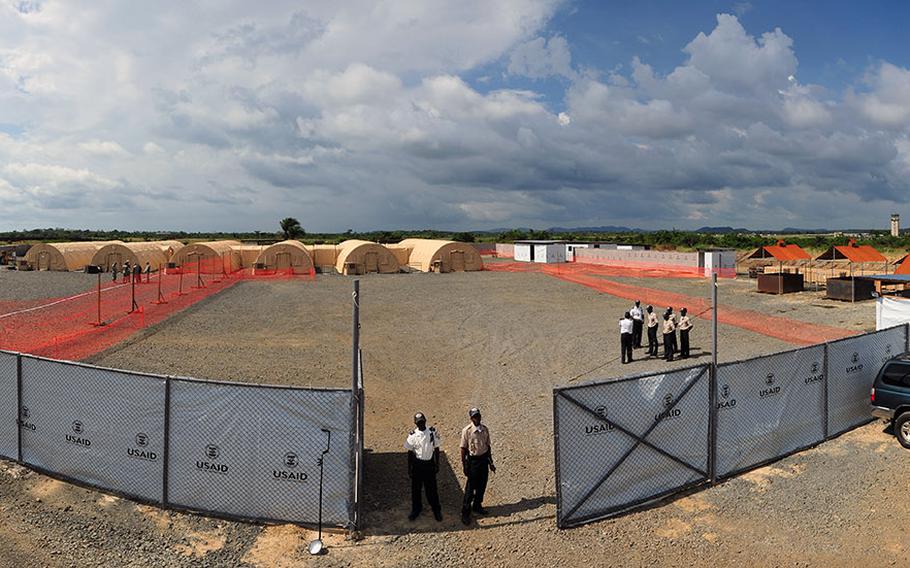 A photo illustration shows the Monrovia Medical Unit, a facility built specifically to care for medical workers infected with the Ebola virus. This image, created using photo merging techniques to create a panoramic view, shows the The MMU as it sits about 30 miles outside Liberia's capital on Nov. 4, 2014. (Nathan Hoskins/U.S. Army)

A photo illustration shows the Monrovia Medical Unit, a facility built specifically to care for medical workers infected with the Ebola virus. This image, created using photo merging techniques to create a panoramic view, shows the The MMU as it sits about 30 miles outside Liberia's capital on Nov. 4, 2014. (Nathan Hoskins/U.S. Army) 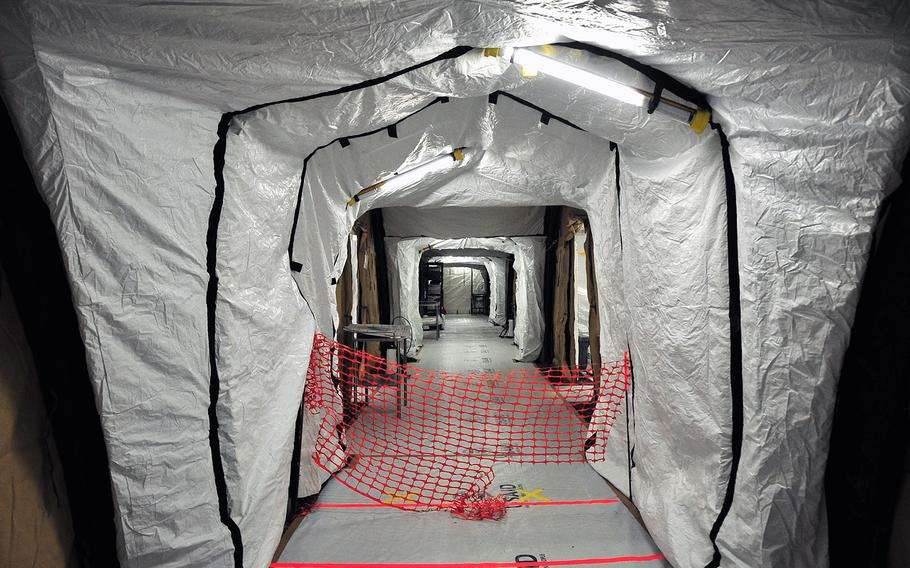 Red lines on the floor in the Monrovia Medical Unit on Nov. 4, 2014, mark the boundary between the low-risk and high-risk zones in the MMU, a facility designed for health care workers who become infected with the Ebola virus. Beyond those lines are the wards that will house suspected and confirmed Ebola patients. (Nathan Hoskins/U.S. Army) Once open, this ward inside the Monrovia Medical Unit will house patients who are Ebola symptomatic but are awaiting their lab work to return. Those testing positive will be moved to the confirmed ward, which is nearly identical to this one. (Nathan Hoskins/U.S. Army) 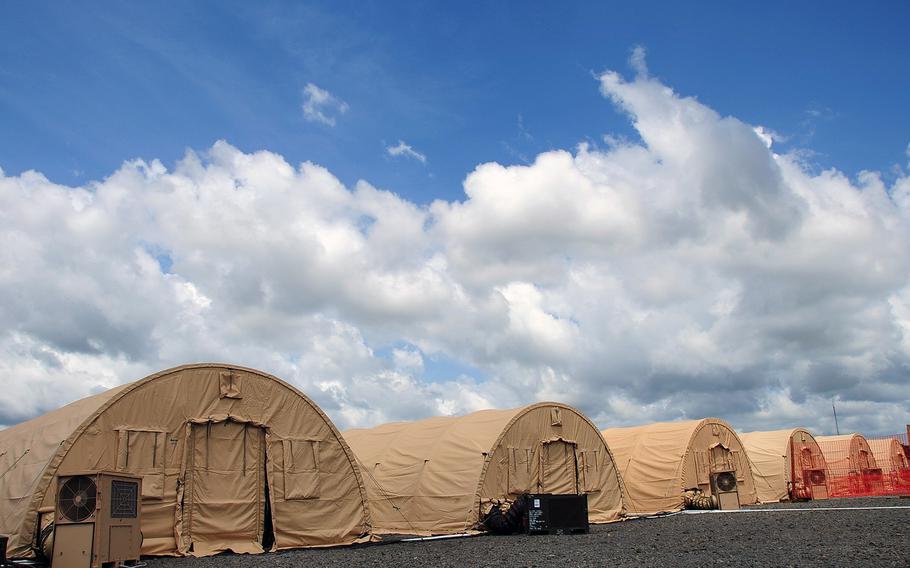 The Monrovia Medical Unit, a treatment unit built to care for medical workers who become infected with the Ebola virus, sits about 30 miles outside Liberia's capital, on Nov. 4, 2014. The 25-bed facility was constructed from the ground up by a team of Navy Seabees, soldiers and airmen from Joint Forces Command. (Nathan Hoskins/U.S. Army)

A new military-constructed Ebola treatment center designed to care for health workers will open Saturday in Liberia, marking a key step forward in an U.S. Africa Command-led campaign to build a series of treatment facilities in the country.

The Monrovia Medical Unit, otherwise known as MMU, is about 30 miles outside of Liberia’s capital of Monrovia. It should serve to reassure the doctors and nurses treating Ebola patients that they will be taken care of if they become ill while working in West Africa, said Navy Lt. Shane Deckert, the MMU facility engineer, in a news release.

The 25-bed facility — the only facility of its kind in the Ebola fight — was constructed by a team of Navy Seabees, soldiers and airmen and will be operated by personnel from the U.S. Public Health Service, according to Lt. Col. Lee Hicks, the Joint Forces Command-United Assistance engineer.

“If an aide worker gets sick, they bring them to the MMU to get taken care of by the U.S. Public Health Service,” Hicks said in a release.

The MMU compound is divided into low-risk and high-risk zones. Because of the contagious nature of the disease, which is transmitted through bodily fluids, the two sections do not connect in any way. The facility includes 12 tents, eight of which will function as three patient wards.

The MMU is different from the 17 Ebola treatment units that are being constructed throughout Liberia in that it will be used to care only for health workers.

The center opening Saturday for medical staff took roughly 30 days to build, according to Capt. R. Carter Langston, a spokesman for the military mission in Liberia.

Meanwhile, the 17 Ebola treatment facilities being built by the U.S. military in partnership with Liberian forces are still being worked on. Ten are under active construction with one expected to open next week and two others later this month.

“The others are following in line,” Langston said.

The completion of the MMU comes as new Ebola cases are on the decline in Liberia — in recent weeks there has been a dramatic drop in new infections.

The trend has given hope, but U.S. military officials have said they are pressing ahead with a plan to construct 17 Ebola treatment facilities. Because the disease can make sudden and unexpected spikes, it’s not yet clear whether the downward trend is the beginning of the end for Ebola in Liberia, where some 4,500 people have died since the start of the epidemic.

Meanwhile, there are signs that conditions are worsening in other affected areas, such as Sierra Leone, where there has been a rise in infections.

The top U.S. officer on Thursday said he expected the military’s Ebola effort to last 18 months.

“Is it a four-year mission? Probably not. But I bet it’s every bit of 18 months, which would be three rotations of six-month deployments,” Gen. Martin Dempsey, chairman of the Joint Chiefs of Staff, told an audience at the Carnegie Council for Ethics in International Affairs.

While there has been progress in Liberia, “Sierra Leone is not trending favorably and nor is Guinea,” Dempsey said.

There are nearly 2,000 Defense Department personnel deployed to the region — 1,759 in Liberia and 175 in Senegal — to support Operation United Assistance. The number of military personnel could increase to as many as 4,000.