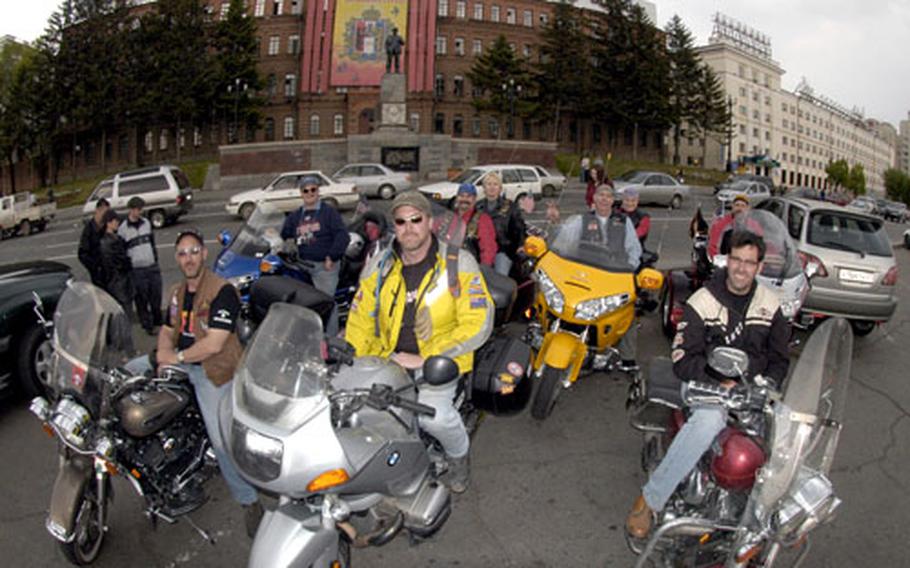 U.S. Forces Korea civilians stop at Lenin Square in Khabarovsk, Russia June 1, during their journey from Seoul from May 29 to June 4. (Courtesy photo)

U.S. Forces Korea civilians stop at Lenin Square in Khabarovsk, Russia June 1, during their journey from Seoul from May 29 to June 4. (Courtesy photo) 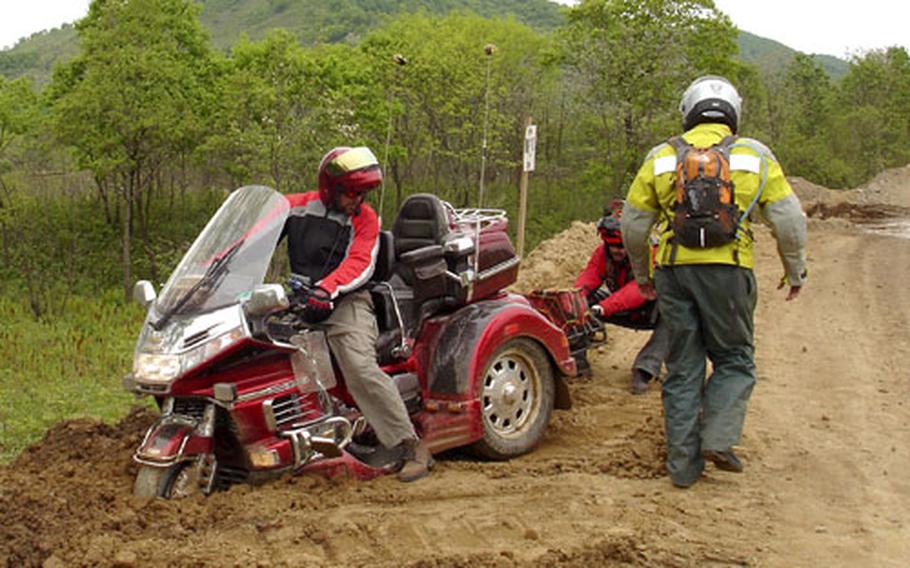 U.S. Forces Korea civilian Dave Darby found their were hazards on the road to Vladivostok during a group trek through Russia from May 29 to June 4. (Courtesy photo) 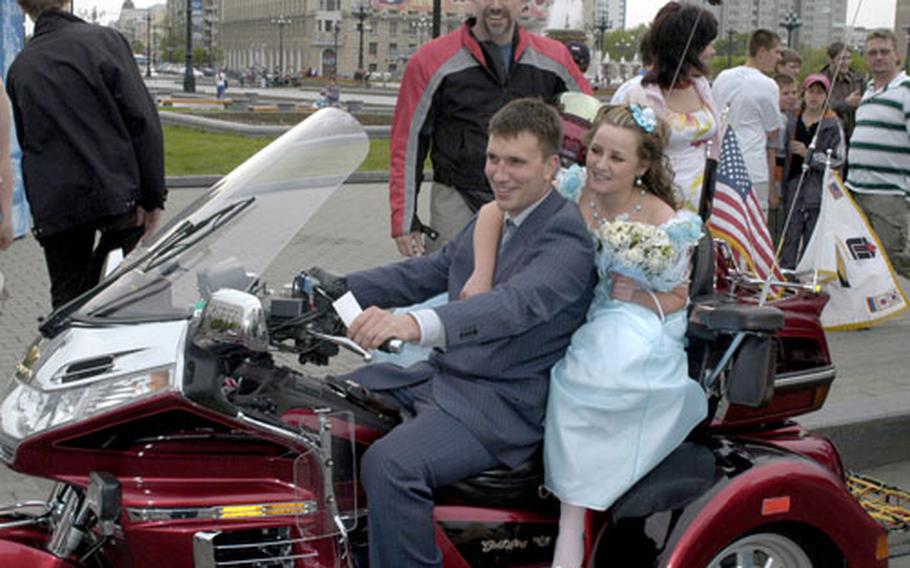 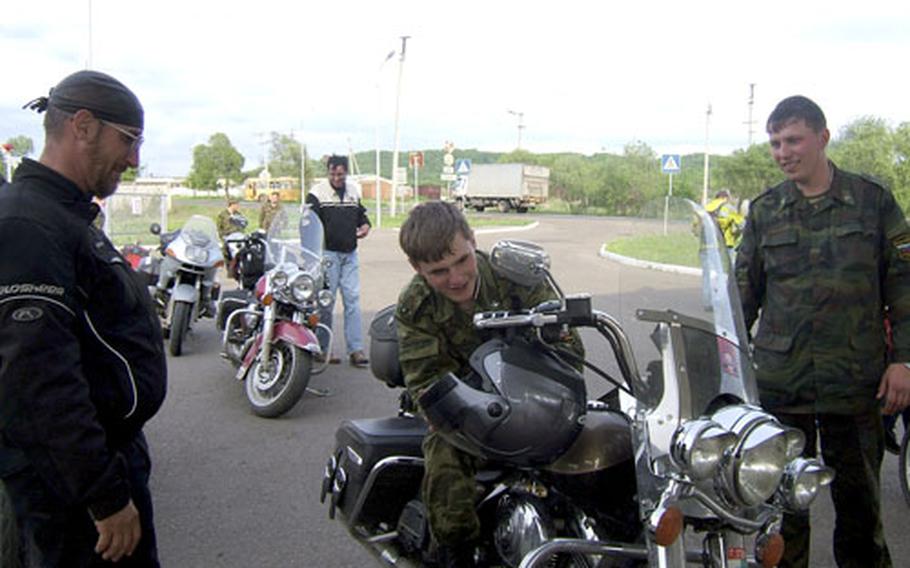 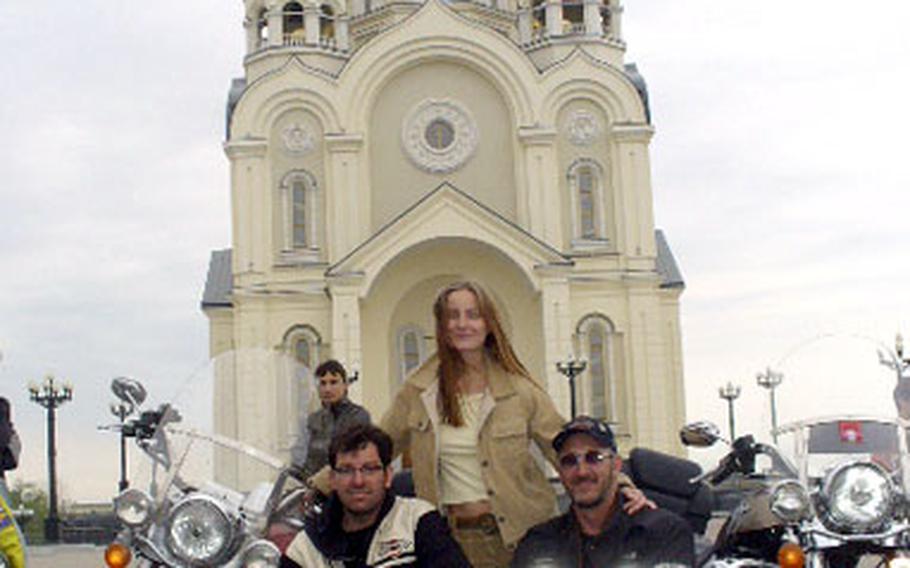 YONGSAN GARRISON, South Korea &#8212; Twenty years ago, Robert Soska never imagined he would one day be sitting proudly atop his Harley-Davidson in Lenin Square in Khabarovsk, Russia, swapping patches with Russian bikers.

Soska and eight others, mostly contractors and retired servicemembers, say they are the first U.S. Forces Korea personnel with registered motorcycles to do just that. After months of planning, their 1,604-mile odyssey took them from Seoul to Khabarovsk, from May 29 to June 4.

The Americans and their three Honda Gold Wings, two Harley-Davidson Road Kings, BMW 1200 SRT and Lehman Trike were instant local celebrities wherever they went, said Soska, a civilian with the 201st Signal Company.

Their ride made Russian newspapers and broadcast newscasts, Soska said. Russian soldiers, children and passers-by alike came for pictures of the bikes. Some didn&#8217;t have their own cameras; they were happy just to be subjects in the group&#8217;s vacation memories.

Since June 1 is a traditional day for marriage in Russia, several brides in white gowns struck their best &#8220;Easy Rider&#8221; poses. One of the riders, defense contractor Larry Erickson, was celebrating his first anniversary with his wife, Natasha, a Khabarovsk native.

The trip began with an overnight ferry from Sokcho in eastern South Korea. They arrived at Zarubino, a Russian town not far from the Chinese and North Korean borders.

From Zarubino, they rode to Vladivostok. The road ran only 150 miles, but took eight hours thanks to the treacherous mud bogs and bumps along the way.

The 500 miles from Vladivostok to Khabarovsk, accomplished in one day, were far more pleasant a ride than that first road, they said. The roads were well paved and reminded some riders of the upper midwestern United States &#8212; very clean, with lots of trees and lakes dotting the countryside.

Every step of the way, the group met Russians who welcomed them, invited them to stay in their homes and generally just wanted to be a part of the spectacle.

Some of the bikers say they didn&#8217;t know each other well before the trip; however, the bonding on that long haul was one of the best parts of the journey, they said.