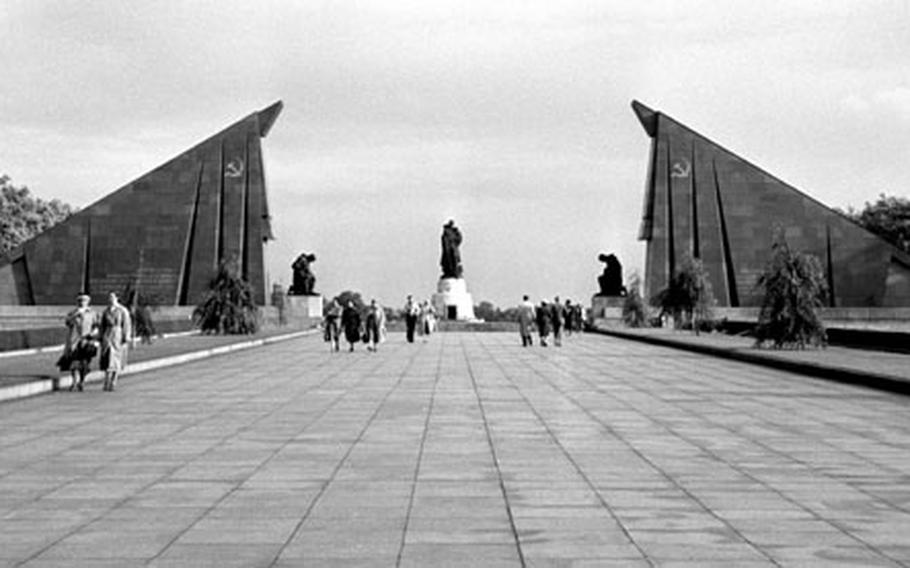 Buy Photo
Stylized Soviet flags, made of granite taken from the ruins of Hitler's chancellery, flank the entrance of the Garden of Remembrance. (Gene Bane/Stars and Stripes)

Buy Photo
Stylized Soviet flags, made of granite taken from the ruins of Hitler's chancellery, flank the entrance of the Garden of Remembrance. (Gene Bane/Stars and Stripes) 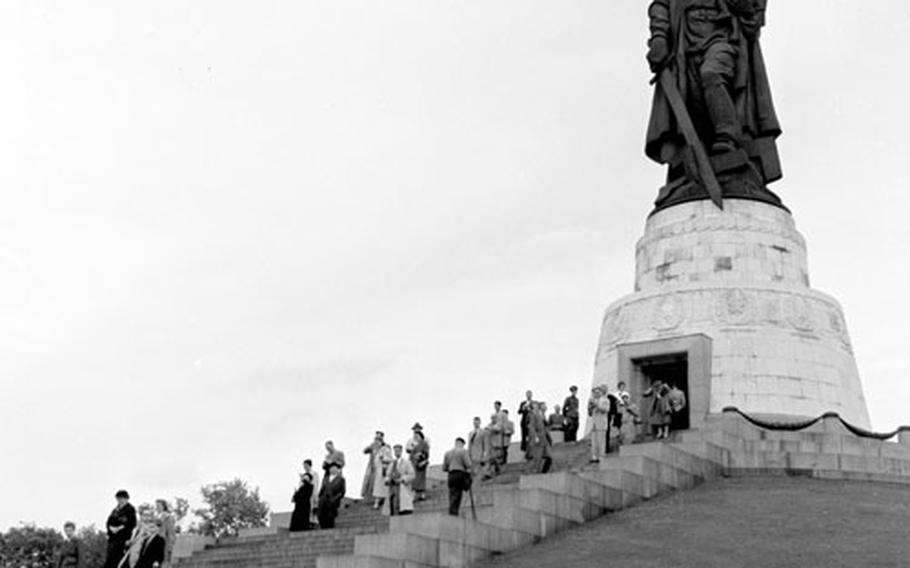 Buy Photo
A statue of a bareheaded soldier stands atop the Hall of Fame. (Gene Bane/Stars and Stripes) Buy Photo
A bronze wreath honors the Soviet dead from the battle for Berlin. (Gene Bane/Stars and Stripes) Buy Photo
On either side of the burial plots are stone blocks depicting Soviet workers and soldiers. (Gene Bane/Stars and Stripes) 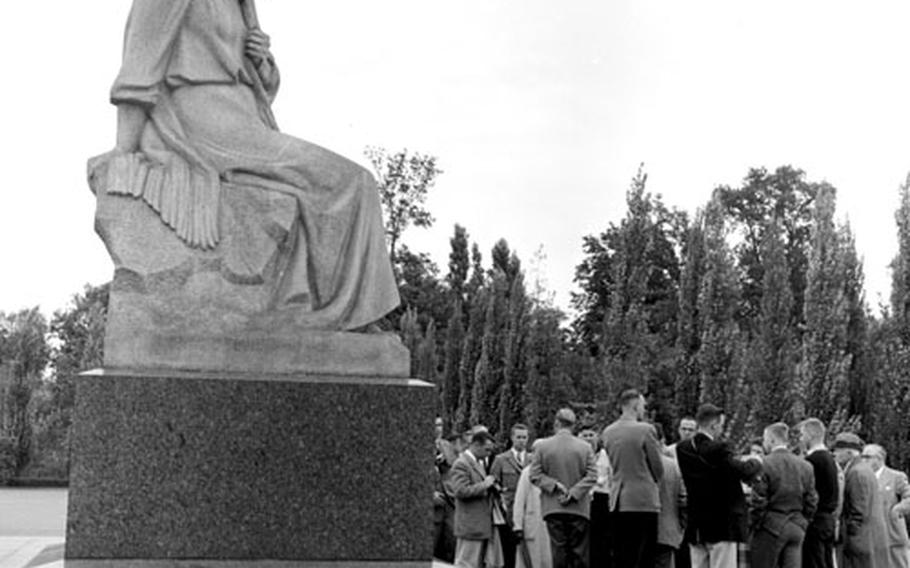 IN ALMOST the very heart of the Soviet Sector, which is East Berlin, there is one of the most beautiful cemeteries in all the world. This is the "Garden of Remembrance," Soviet Russia's tribute to those of its soldiers who died in the siege of Berlin.

Once this was a splendid park called Treptow Park, one of the finest in the great metropolis. It was laid out in 1876 on the shores of the Spree River. The wide avenue with trees lining both sides used to be Treptower Chaussee, but the Soviets decided that Puschkin Allee sounded much better and that is what it is today.

The center of this park was taken over by the Soviets and transformed into its Red Army War Memorial &mdash; "The Garden of Remembrance."

In five sections of an extensive lawn are reputed to be the bodies of at least 2,000 Soviet soldiers who died in the battle for the city. On a hill at the end are said to be about 600 more of their dead.

No vehicles of any kind are permitted inside this cemetery. Nor is one permitted even to smoke. A visitor walks up a wide line until he comes to a statue impressive in its eloquence. It is of a Russian mother mourning. The symbolism is clear, for the designers intended to portray her as Mother Russia mourning her dead sons. It is a work that leaves a deep impression upon all who see it, even though conflicting thoughts race through the mind.

Few realize that the memorial, although designed by Soviet architects, was built by German laborers who worked day and night for 18 months to complete it.

The visitor looks ahead from the statue of Mother Russia and marches up a wide path to a flight of steps where there are two more statues, one on each side. Two Red flags have been carved out of granite of similar hue, both drooping forward. Before each flag a soldier in bronze kneels with head bowed and helmet in hand. The stones for these monuments were taken from Hitler's bombed chancellery.

Then you look down on the five plots, carefully nurtured, green and fresh, which contain the bodies of the dead. You look all about for something which should be there but isn't. This is a cemetery. It should be consecrated ground but &mdash; there are no crosses. Nor is there any other symbol to indicate that these dead had a faith &mdash; that in life they spoke to God in one of many faiths or that in death they sought to be in His presence.

Steps lead down to this lawn, on both sides of which are eight blocks of white stone with carved reliefs depicting the life of Workers in the Soviet Union and men of the Red Army. Each of these blocks bears an inscription by Stalin: One of these is in German &mdash; "Die Heimat Wird Ihre Helden Nicht Vergessen." Translated, "The people at home will not forget their heroes."

In the distance, at the end of the five plots, there stands the Hall of Fame atop a small hill. This is an imposing affair and no effort has been spared to make it impressive.

Inside a circular mosaic, rich in gold leaf and color, Soviet peasants are depicted in costumes representing every corner of the country standing in mourning around the grave of the Soviet heroes. In the center of the dome overhead there is a burning star &mdash; a replica of the richest of Soviet World War II decorations &mdash; the Order of Victory. On a pedestal in the center of the room, but under glass, is a parchment book with the names of the dead inscribed in gold leaf.

Everything is symbolical, even the 34-foot-tall bronze figure of a Red Army soldier on top of the Hall of Fame. The bare-headed soldier holds a child in his left arm while in his right he holds a sword with which he is slashing a swastika lying at his feet.

Turning to leave the cemetery you behold a group of soldiers entering, two of them carrying a huge wreath to be placed on the graves of the dead. These are visiting Czechoslovak officers and with them are VOPO, or East German military police, and soldiers in the uniform of the East German Communist Army. It is not an uncommon sight to see soldiers of Red satellite nations visiting this cemetery to pay tribute to the Soviet dead who fell in the Battle of Berlin.

Most of those who have visited the cemetery are from the West Sectors and they are visibly impressed by the beauty of the memorial park as well as by the statues they have beheld. But they are thoughtful, too. This is another of the Soviet showcases of East Berlin. Some of them are listening to an American who appears to have summed it all up quite briefly:

"The Reds treat their dead better than they do their living."