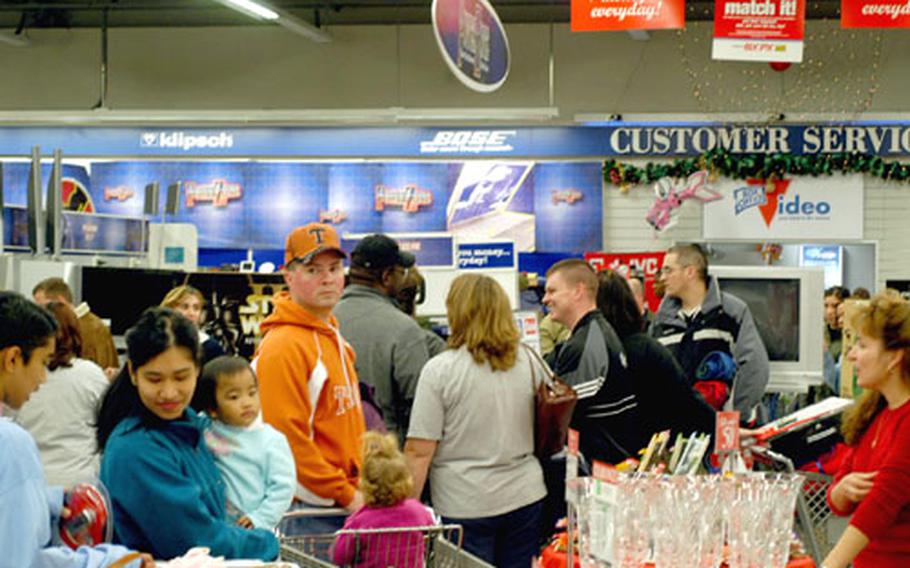 The Power Zone area of the base exchange at Aviano Air Base, Italy, was a popular place Friday morning, with hundreds of shoppers entering the area before it normally would have been open to the public to look for bargains. Business was brisk at AAFES stores around Europe, an AAFES spokeswoman said. (Kent Harris / S&S)

AVIANO AIR BASE, Italy &#8212; So much for sleeping in during a long holiday weekend.

Tech. Sgt. Christopher Gaddis was in the parking lot in front of the Army and Air Force Exchange Service complex Friday well before the sun and chilly morning temperatures began to rise.

&#8220;I got here at 5 and other people started showing up about a quarter after,&#8221; he said minutes before the store opened at 7:55 a.m. The doors to the inside of the complex had opened at 6 a.m., allowing a long line of customers to wait in relative comfort and warmth. Burger King and Cinnabon opened at 7.

Gaddis was first in line to get into the main store.

And what did he get for his efforts? He was the first to receive a $20 gift card. The store gave out 99 others to those waiting in line behind him.

Debbie Byerly, an AAFES spokeswoman, said stores around the theater had similar handouts and sales. She said business appeared to be brisk.

The day after Thanksgiving is often a big shopping day in the States. &#8220;Here in Europe, we wanted to give people the same opportunity,&#8221; Byerly said.

Gaddis said he had only one specific item in mind.

Staff Sgt. Andreus Whitehead was about halfway back in line. He&#8217;s on temporary assignment from the States and heard about the sales going on.

Store manager Mike Brennan said sales so far have been going well. The store sold about $28,000 in merchandise at this time a year ago. This year, the total was about $71,000.

Various items were on discount, and store personnel continued to hand out coupons for 10 percent or 20 percent off single items up to $500 to all coming in after the 100 gift cards were gone.

Many customers headed to the Power Zone area, where televisions, DVD players and computers were quickly disappearing.

Employee Keith Adams carted in four JVC televisions with 29-inch screens a few minutes after the doors opened to replace ones already taken. He had to lift only two, however, because customers grabbed the others before they were placed on shelves.