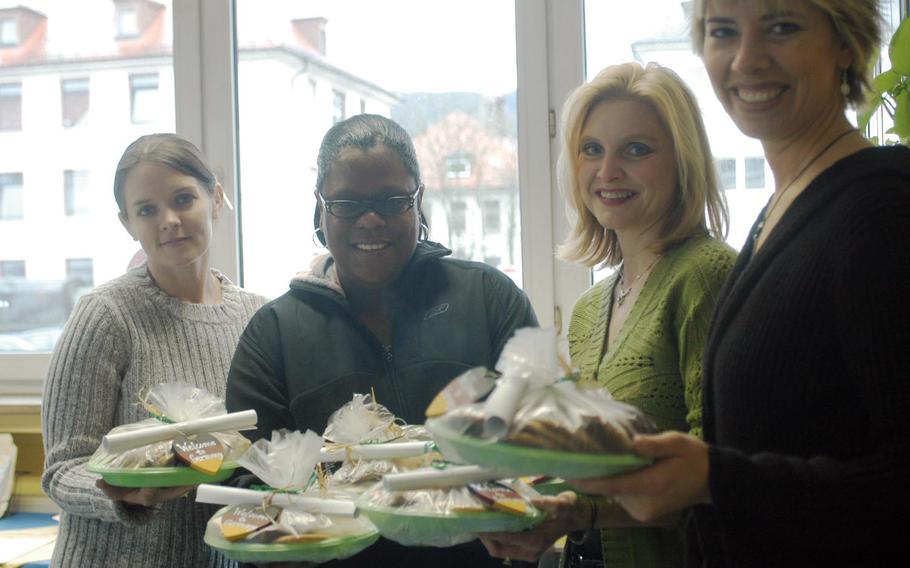 When a lonely but hospitable Jill Connett years ago brought a neighbor cookies on a green plastic plate, an enduring friendship began. Now that sentiment - and the plate - is being expanded to new soldiers and families assigned to V Corps Special Troops Battalion. Every month, volunteers bake, then assemble some 30 plates of goodies to welcome newcomers. From left are Janice Cohen, Tangela Calhoun, Jill Connett and Lana Barshinger, the battalion Family Readiness Support assistant. (Nancy Montgomery / S&S)

When a lonely but hospitable Jill Connett years ago brought a neighbor cookies on a green plastic plate, an enduring friendship began. Now that sentiment - and the plate - is being expanded to new soldiers and families assigned to V Corps Special Troops Battalion. Every month, volunteers bake, then assemble some 30 plates of goodies to welcome newcomers. From left are Janice Cohen, Tangela Calhoun, Jill Connett and Lana Barshinger, the battalion Family Readiness Support assistant. (Nancy Montgomery / S&S) 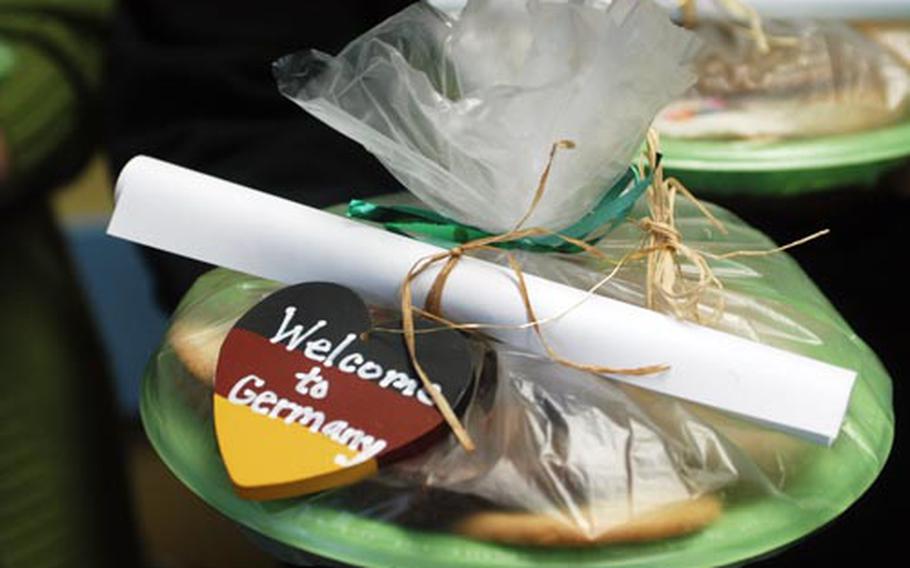 HEIDELBERG, Germany &#8212; Jill Connett hadn&#8217;t been out of Alabama much when she married her Army officer beau.

Connett, an elementary school teacher, wasn&#8217;t really prepared for the couple&#8217;s first posting, to Okinawa, Japan. She was lonely and homesick and weepy.

"The first five moves," said Connett, "I cried every time."

Connett, wife of Lt. Col. Ty Connett, commander of V Corps&#8217; Special Troops Battalion, did what countless military wives do all over the world. She learned how to deal with it.

She realized, she said, "You don&#8217;t sit back and expect to be welcomed when you get to a new place."

Which is sort of funny. Because Connett and other people from the battalion&#8217;s Family Readiness Group try to make sure that all newcomers to the battalion will be welcomed when they get to Heidelberg. All they have to do is sit back and wait for a green plastic plate full of homemade baked goods to arrive, along with the little wooden heart painted to say "Welcome" and a list of contact numbers and upcoming events.

The FRG has been getting together monthly to make up and deliver the plates to all new soldiers and their families arriving in the unit &#8212; some 30 or so plates each month.

The welcoming effort got started after Connett told Lana Barshinger, battalion FRG support assistant, the story of "The Green Plate."

Nine years ago, when new to Fort Leavenworth, Kan., Connett decided to introduce herself to her neighbor, Tammy. She baked some cookies and brought them over on a green plastic plate.

A friendship was formed, the two families spent time together, and the green plate was passed among the two homes, covered with baked goods, for a year.

Then both women&#8217;s husbands received new assignments. Tammy teared up and gave Connett the plate to keep as a souvenir. The Connetts went to Colorado Springs, Colo. Tammy and Dwayne Williams went to the Pentagon.

Two months later, on a clear, sunny morning, the U.S. was attacked by al-Qaida. Dwayne Williams was killed in the 9/11 attack on the Pentagon.

After Connett heard the terrible news, "At that moment the plate came out of storage," she said. "It&#8217;s a constant reminder: You don&#8217;t wait to get to know people."

Barshinger was touched by the story and thought it could be expanded for the FRG.

"Most units have trouble welcoming people personally and consistently," she said.

Tangela Calhoun, who was helping with the green plates last week, agreed. When her family arrived in Heidelberg in June &#8212; and the FRG green plate welcome was on summer hiatus &#8212; "I didn&#8217;t feel welcome at all," Calhoun said.

For a couple of years, Connett was too busy at home, with a young son and two teenage nieces whom she and her husband became guardians of after a family tragedy, to do a lot of outreach herself.

And her husband, a Green Beret deployed in 2003, was gone a lot.

She once saw him unexpectedly on TV after the Iraq invasion, dressed in civilian clothes, with a group of Kurds.

"The deployment was extremely hard," Connett said. "He was gone on and off for three years. No, it&#8217;s not been all roses."

So no green plate was coming out of the Connett kitchen for a while. But before being assigned to Heidelberg, while at Fort Benning, Ga., "I was able to get back into the way I normally am &#8212; that&#8217;s very much a Southern hospitality thing," Connett said.

And while her sister helped her unpack, they found the green plate, and Connett told the story, and her sister encouraged her to get it down in writing.

So there is also a little 25-page booklet Connett got published, complete with illustrations and blurbed by the former ABC newsman who was embedded with Connett&#8217;s husband, titled "The Green Plate."

Connett said her hope is that the more people are welcomed, the more they&#8217;ll welcome others.

She hopes, she wrote in her booklet, that "those very people eventually pass on the kindness they have received in their own special way."