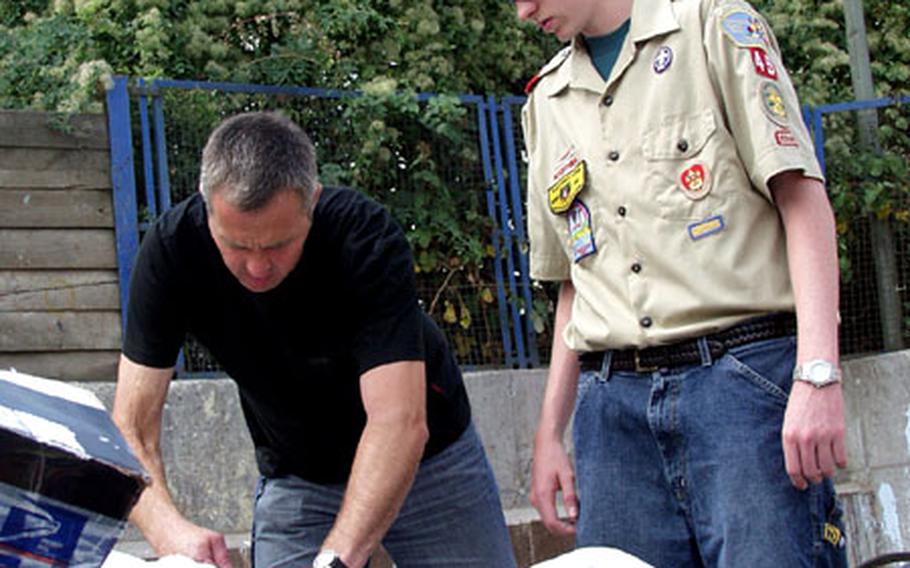 HANAU, Germany &#8212; Community officials in Hanau hope that what began as an Eagle Scout project for one teen will blossom into a long-term initiative by local Boy Scouts to improve recycling efforts in housing areas.

&#8220;We are hoping, with our continued efforts, to [help Hanau] meet the requirements of recycling,&#8221; said Chief Warrant Officer 5 Alan Ruzicka, Scout master for Troop 49.

It&#8217;s an ambitious undertaking, since the local commander, Col. Herman &#8220;Tracy&#8221; Williams III, has set a goal of cutting garbage disposal costs by half, if possible. In 2004, Hanau spent more than $1.4 million on trash removal, according to the community environmental management office. The total would have been $160,000 higher if it were not for community recycling efforts.

Williams and other officials view recycling as the key to cutting costs. But, just as at other U.S. military communities in Europe, not all residents take the time to consistently do it right.

&#8220;If you are new here, you have other problems than sorting trash,&#8221; said G&#252;nther Schaack, who oversees the recycling effort as chief of sanitation.

One problem, Schaack said, is that it takes time to educate residents, who typically stay for only a few years. Once they get the hang of it, all is well, until they move and another recycling rookie ambles up to the Dumpster.

Earlier this year, Ruzicka spoke with Baker about his Eagle badge project and mentioned the community push to promote recycling. Baker bit on the idea and, after some research, led an effort to pass out pamphlets and survey hundreds of residents on their recycling habits.

Baker said some single parents find it inconvenient to recycle because there is so much more going on in their lives.

But Baker came across people who also provided sound feedback, ideas that community officials will consider as they tweak the program in hopes of increasing participation. Some suggested the community distribute small recycling bins to each household.

So far, Baker&#8217;s efforts haven&#8217;t translated into higher numbers, community officials say, but they have stirred interest. Ruzicka said members of Troop 49 would go door-to-door, again, to promote the merits of recycling.

Dagmar Trittin, a community official who assisted Baker, said the Boy Scouts showed a lot of initiative and thinks the association between them and the community is mutually beneficial.