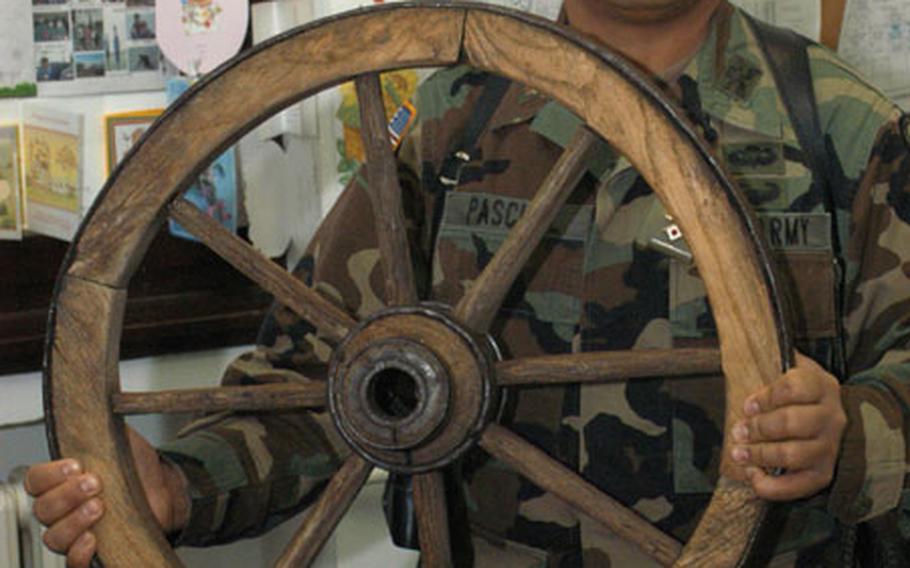 Maj. M.R. "Donel" Pascual of Headquarters and Headquarters Company, 35th Infantry Division, proudly displays the wagon wheel representing the Broken Spoke Award he won. Following a funny presentation during Saturdays&#39; Battle Update Brief meetings at Eagle Base of the biggest mess-ups of the week, some as erroneous as being tall or short in stature, or just gullible, the award is given out every week. The presentation draws standing-room-only crowd to the morale-building and stress-relieving event. (Ivana Avramovic / S&S)

EAGLE BASE, Bosnia and Herzegovina &#8212; The Battle Update Brief, better known as the BUB meetings, would usually not be the place where soldiers would go if they wanted some laughs.

After the business is done, the Santa Fe division turns to fun and a presentation of that week&#8217;s nominees for the Broken Spoke Award. The lucky candidates earn their nominations for the biggest mess-ups of the week, or just for being placed in a silly situation.

In an air of entertainment, Capt. Brian Schoenhofer of the 35th Infantry Division introduces the candidates, along with humorous photos and anecdotes.

His job is tough; the nominations are many.

And finding the proper presentation material, such as appropriate photos, is tricky.

That was not the case with last Saturday&#8217;s nominees: a sergeant major whose office was taken over by pigeons; a specialist who was left behind in Sarajevo during an assignment of photographing Deputy Secretary of Defense Paul Wolfowitz during his visit to Bosnia; and Maj. M.R. &#8220;Donel&#8221; Pascual, whose only offense is being short.

Hilarity filled the room as Schoenhofer showed slide after slide. Seemingly doctored photos showed a very small door with Pascual&#8217;s name. A soldier, almost twice as tall as the door, stood next to it to add to the effect.

Pascual, in charge of communications and intelligence, explained that the small door really exists in one of his offices.

He didn&#8217;t smell anything fishy when his soldiers came to his office to take photos, though he did warn them they couldn&#8217;t use the pictures against him.

It was the first meeting for Spc. Guy Choate of the 343rd Mobile Public Affairs Detachment, who was the photographer nominated for being left behind.

Creativity and good ideas have helped Schoenhofer make almost every morale-building presentation a success. He has enjoyed it, in spite of the 15 to 20 hours a week on average he puts into creating it.

Although recipients have to give up the wheel after a week, are not able to pin a Broken Spoke Award on their chest and may not want to put it on their r&#233;sum&#233; like they would with other awards they get for serving in Bosnia, the troops get to keep a Broken Spoke certificate and all the laughs.

Some recipients of the Broken Spoke Award:

&#8226; Col. Michael Heredia, of the 35th Field Training Group from Fort Riley, Kan., ended up on stage with the Oakland Raiders cheerleaders. Birthday party mementos highlighted the presentation for the normally reserved colonel.

&#8226; First Lt. Camella Andrews, of Headquarters and Headquarters Company, 35th Infantry Division, received hers for being too gullible. As part of an April Fool&#8217;s joke, she was led to believe that she was to become the new division transportation officer, a complicated position reserved for a major. If things were not bad enough, the wheel was stolen from her after she won it. Nominated again for not taking care of the wheel, she earned the honor of keeping it for another week.

&#8226; Lt. Col. Mark Stevens, the inspector general with Headquarters and Headquarters Company, 35th Infantry Division, tried to clear his weapon in a mailbox instead of the clearing barrel. &#8220;There was even a design for a new, easily identifiable clearing barrel proposed,&#8221; Capt. Brian Schoenhofer of the 35th Infantry Division said. &#8220;He earned the award for his inability to hit the broad side of a barn, or even recognize the barn.&#8221;