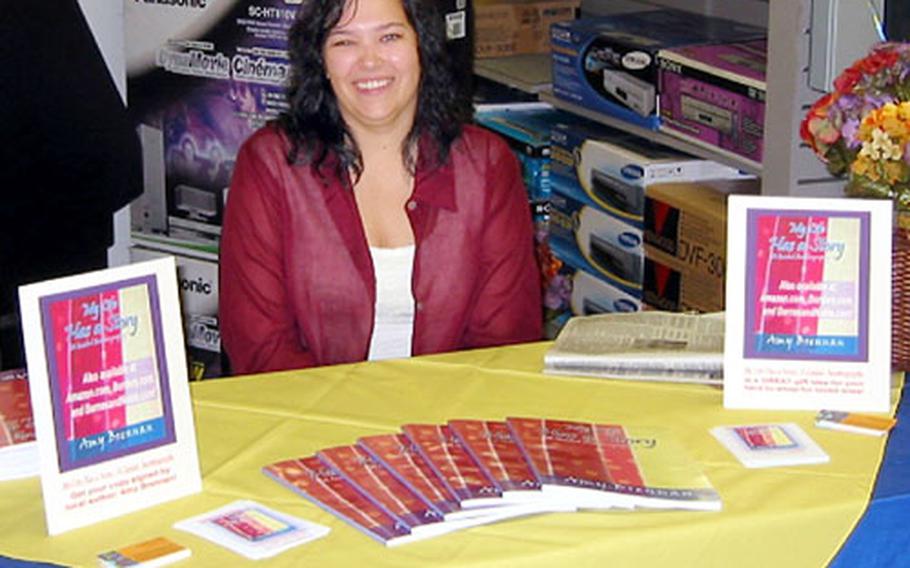 Amy Brennan, a teacher at Ernest J. King High School at Sasebo Naval Base, Japan, has published her first book and recently held a book signing at the base’s Navy Exchange store. The book, called “My Life Has a Story: A Guided Autobiography,” is aimed at helping others write their life stories. (Paul Brennan / Special to S&S)

It&#8217;s a manual guiding readers through the process of writing an autobiography.

The 27-year-old Ernest J. King High School teacher held a book signing in the Navy Exchange here earlier this month. She said she received encouragement from the community during the signing, selling all 25 copies the store had stocked.

She wants her book to assist would-be writers in putting some &#8220;histories, memories and advice down on paper,&#8221; she said. Rather than providing a general prompt followed by an intimidating blank page, the book asks specific questions. The result is an overview of the major aspects and details of an individual&#8217;s life.

&#8220;My book has a really wide audience. If you have ever thought that you have some interesting things in your life that you would like to get down on paper, this book is for you,&#8221; said Brennan, wife of Paul Brennan, also an E.J. King teacher. The couple arrived in Sasebo about two years ago.

&#8220;If you have a hard time writing anything about yourself because you just don&#8217;t know where to start, this book can help you,&#8221; she said. &#8220;If you have someone in your life that you care about, but you have never taken the time to ask some of those big questions, show him or her that you want to know them better.

Brennan said she got the idea for the book after her uncle Don Warner died from lung cancer several years ago.

Brennan, a graduate of Butler University in Indianapolis with an English-creative writing degree, said she enjoyed writing the book, but prefers crafting poetry.

Even before college, Brennan enjoyed writing.

&#8220;When I was young, I would write stories or plays about my stuffed animals, or about things I saw in nature,&#8221; she said. &#8220;As a teenager, I would write to blow off steam or work out problems. In college, as an English major, I wrote more than I can possibly remember.&#8221;

How does her appreciation for writing blend with her teaching?