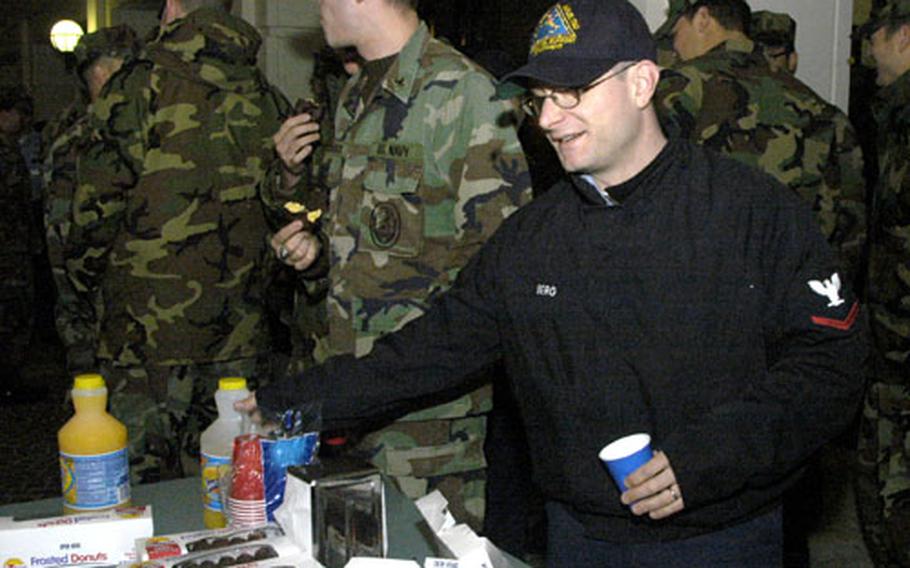 Petty Officer 3rd Class Massimo Berg fills up on free donuts and orange-flavored drink in the pre-dawn hours Tuesday as he prepares to retake a promotion exam. (Sandra Jontz / S&S)

Petty Officer 3rd Class Massimo Berg fills up on free donuts and orange-flavored drink in the pre-dawn hours Tuesday as he prepares to retake a promotion exam. (Sandra Jontz / S&S) 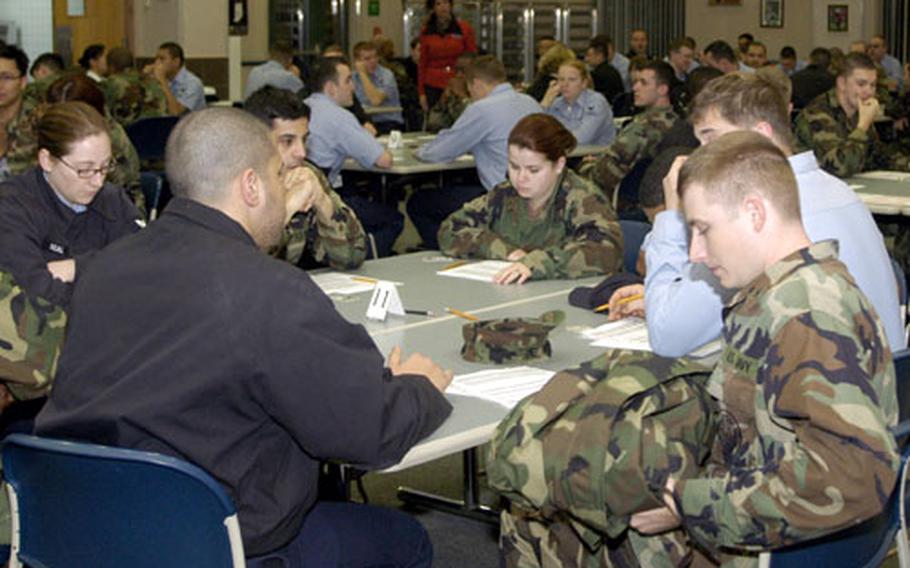 Some 160 third-class petty officers settled in at the "Ciao Hall" dining facility at Naval Support Activity Naples, Italy, on Tuesday to prepare to retake their advancement exams. (Sandra Jontz / S&S)

NAPLES, Italy &#8212; Some 160 sailors lined up outside the dining facility before sunrise Tuesday for their make-up advancement exam.

Earlier this month, senior enlisted leadership broke the news to Naples-based E-4s that they would have to retake their advancement exams after the answer sheets to the initial tests, taken in September, had been lost in the mail.

Dmitriev had done pretty well on the first round, he said. Though he studied for the make-up, he would have preferred the first batch be the one that mattered.

Fewer took Tuesday&#8217;s retest because some either had moved or were out of town.

The September batch of answers was sent express mail instead of registered mail from Naples to Florida.

The express service provides limited tracking. Mail is logged at a point of origin, but is not tracked again until it arrives in New York.

This time, Navy postal clerks will hand carry the answer sheets onto an aircraft at the Fiumicino airport in Rome for a direct flight to the John F. Kennedy International Airport in New York, where the sheets then will make their way to Florida, Sanchez said.

In addition to having to retake the test, some sailors expressed concern over possible identity theft issues when they first learned of the lost answer sheets, which contain personal information such as the sailors&#8217; Social Security numbers.

Sailors were advised to monitor credit reports and report suspicious activity. &#8220;And it couldn&#8217;t hurt to put out a fraud alert with credit agencies,&#8221; Daigrepont said.

No issues have popped up, and Navy personnel still are investigating to see if it can be determined whether the answers were lost or stolen, Daigrepont said.

The mix-up with the original answer sheets will not delay promotions for E-4s across the entire Navy.

The sailors who have to take late or makeup tests are promoted if they score at or above that base line, provided, of course, they meet other promotion requirements.