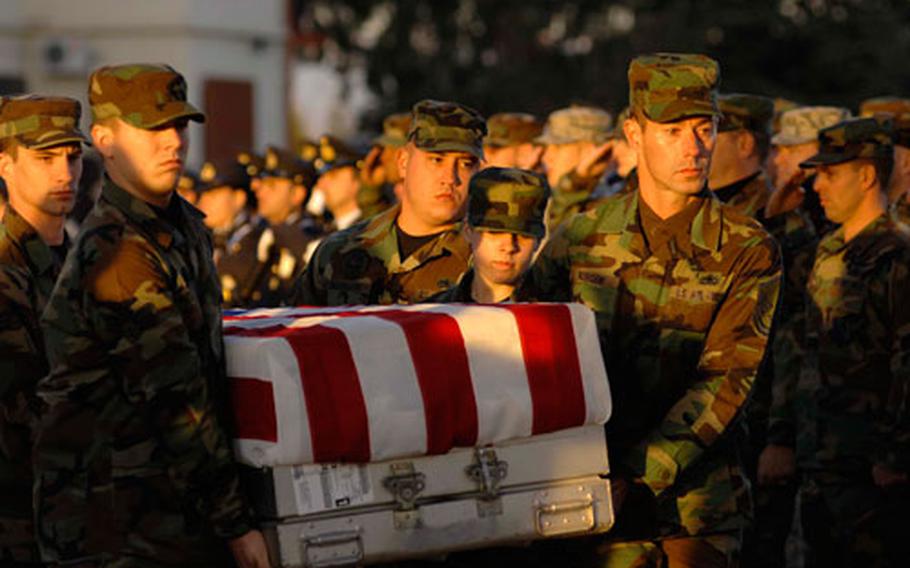 VICENZA, Italy — Six years after an Army helicopter plummeted to earth in northeastern Italy, DynCorp International has settled a lawsuit with four of the families of the six servicemembers killed in the crash.

Neither the plaintiffs nor defendant would reveal how much Dyncorp — which contracts with the military to provide aircraft maintenance — agreed to pay to settle the suit just as the case was going to trial on Dec. 31.

The amount, according to Todd Macaluso, a San Diego-based lawyer who represents the families along with New York-based co-counsel Hunter Shkolnik, is “one of the largest settlements in the history of military aviation accidents.” He declined to specify the amount. But such settlements have typically involved tens of millions of dollars.

The case was filed in 2009 by the families of Capt. Christian Skoglund and Chief Warrant Officer 2 Davidangelo Alvarez, the pilot and co-pilot of the UH-60 Black Hawk; Air Force Capt. Cartize Durham; and Staff Sgt. Mark Spence, both passengers on the flight.

Of the 11 servicemembers aboard, six were killed and five were injured.

An investigation by V Corps ruled out pilot error and weather conditions. It found that the helicopter had experienced a “loss of yaw control” — the ability to turn the helicopter — either because of something lodged in the controls or mechanical failure. Investigators noted a worn bell crank, a part responsible for controlling left-pedal turns, and that previous pilots had complained about “popping and clicking” in the helicopter’s pedals.

According to the investigation, Dyncorp mechanics believed they had fixed the problem.

But further investigation showed that Dyncorp had not fixed the problem, Macaluso said. “They ordered a new bell crank and bearing and it never ended up getting installed,” he said. “That’s what caused the crash.”

A DynCorp spokeswoman disputed that the company was at fault.

“Contrary to claims by plaintiffs’ attorneys, we believe the evidence will show that the cause of the accident was not related to any maintenance performed by DynCorp International or its personnel. Due to ongoing litigation, we cannot comment further,” Ashley Burke said in a statement.

A lawsuit brought by two of the injured servicemembers is pending, he said.

In addition to four soldiers aboard the flight, three of them crewmembers, seven airmen assigned to the 31st Fighter Wing at Aviano were on board for a so-called incentive flight. One had done a favor for Company G, and brought along two co-workers. Another airman planned to re-enlist on the flight, and three airmen accompanied him.