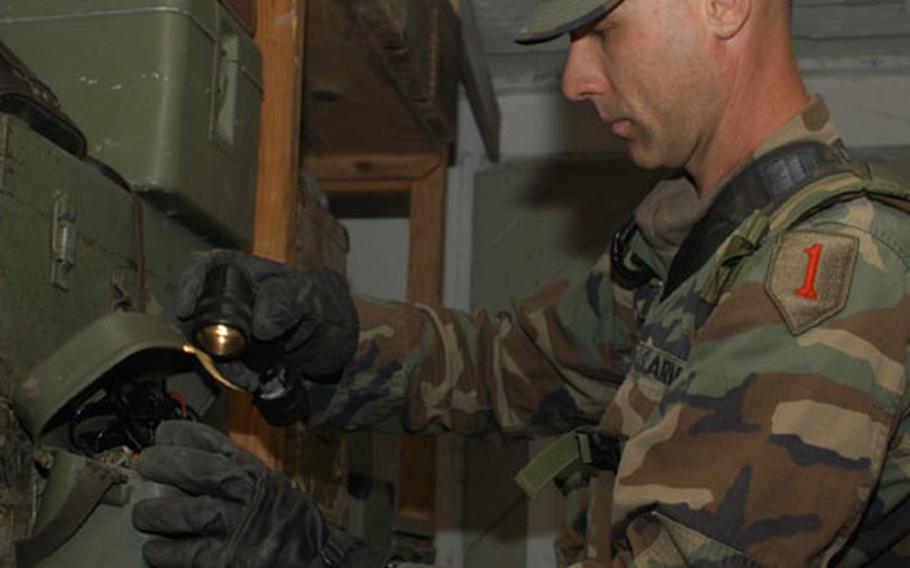 Spc. Kenny Santee of Task Force 1-18, a part of the 1st Infantry Division, uses a flashlight to search a box at the weapons storage site at a military camp at Manjaca Range during one of the Dynamic Response 03 exercises. Troops were checking to see if Bosnian Serb forces are in compliance with regulations on what type and amount of weapons and ammunition are authorized. (Ivana Avramovic / S&S)

Spc. Kenny Santee of Task Force 1-18, a part of the 1st Infantry Division, uses a flashlight to search a box at the weapons storage site at a military camp at Manjaca Range during one of the Dynamic Response 03 exercises. Troops were checking to see if Bosnian Serb forces are in compliance with regulations on what type and amount of weapons and ammunition are authorized. (Ivana Avramovic / S&S) Spc. Andrew Shepherd, left, and Pvt. Steven Olson, both of Task Force 1-18, a part of the 1st Infantry Division, look through one of many boxes in the weapons storage site at a military camp at Manjaca Range during Dynamic Response 03 exercise. The task force deployed from Germany for three weeks. The purpose of the monthlong annual exercise in Bosnia and Kosovo is to show that coalition forces can rapidly deploy to the region to reinforce the international troops on ground if needed. (Ivana Avramovic / S&S)

The troops were practicing for a situation in which they would have to deploy quickly to the Balkans and provide stability to the region, said 1st Lt. Scott Hady.

Troops from seven NATO and Partner nations deployed to Bosnia and Kosovo to rehearse different scenarios and demonstrate the ability of international forces to react quickly. The annual exercise began Aug. 26, with paratroops jumping into Bosnia, and ends Wednesday.

Last week Hady&#8217;s soldiers went through a military camp at the Manjaca Range of the Republika Srpska military from the Serb-run part of the country. They searched weapons storage sites and other buildings to see if Serb forces are complying with regulations on types and numbers of weapons and ammunition they are authorized to have.

They found &#8220;a fair amount of stuff&#8221; including rounds, ammunition and projectile fuses.

&#8220;They&#8217;re not breaking any serious regulations, but if we do identify any small infractions, we will confiscate the weapons.&#8221;

British soldiers who have been in the country for the last six months went with the Americans to help clear up any questions on what is and is not authorized.

The U.S. troops helped the limited staff on ground cover the 75 square miles of the range near Banja Luka in northwest Bosnia.

During the exercise, a British Merlin helicopter sling-loaded a U.S. Humvee, the first time the two had been paired together. Information on how fast and at what angle the helicopter can fly while carrying the Humvee will be added to the helicopter&#8217;s manual on bearing different loads.

Other U.S. troops, along with Dutch, Canadian and British forces stationed in Bosnia, went through communities asking about possible weapons caches left from the war. The patrols were aimed at ridding the country of dangerous weapons and strengthening relationships between the coalition forces.

In Bosnia, the number of international troops has dwindled from 60,000 in 1996 to fewer than 12,000 now. The exercise showed how quickly reinforcements could be in place.

&#8220;No matter how small the force gets, we can still react [with] the troops in Europe,&#8221; said Sgt. 1st Class Benjamin Cortes, fire support and information operations noncommissioned officer in charge for the exercise.

Some of the troops in Task Force 1-18, a part of the 1st Infantry Division, performed similar operations during an eight-month deployment in Kosovo that ended in July, but some were new to the unit or did not get to go there.

The 1st ID is scheduled for a rotation in Iraq next year, and this exercise proved good training for future missions.

&#8220;It gives the soldiers experience they need to get better. For our unit, this was very helpful experience,&#8221; said Maj. Steven Miska, operations officer for Task Force 1-18.

For example, troops and equipment had to move through different countries and government systems, Miska said.

Also, troops learned the importance of establishing a good relationship with the local people and explaining to them the military&#8217;s goals, he said.