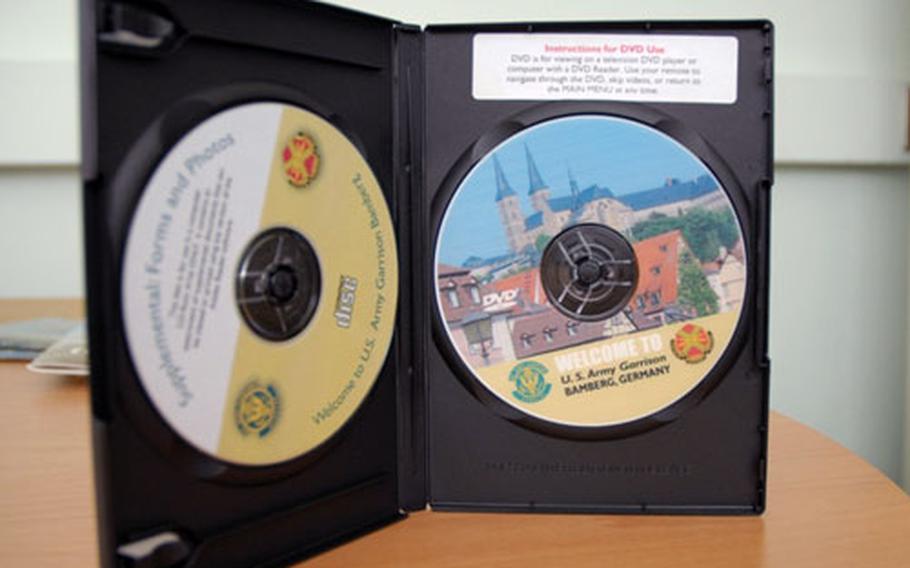 The Bamberg Army community has developed a welcome to Germany DVD for some 200 soldiers and their families who will be moving to Bamberg from Italy later this year. (Mark St.Clair / S&S)

BAMBERG, Germany &#8212; The Bamberg military community is rolling out a digital welcome wagon for hundreds of soldiers on their way to Warner Barracks from Italy later this year.

At the request of the garrison commander, the base has developed an interactive DVD to help incoming soldiers and families learn what the community has to offer.

Two weeks ago, a team from Warner went to Italy and met with some 200-plus soldiers and their families, making sure they all had a copy.

One of those products was the DVD.

Opening with a welcome message from Gatto, everything from child care to car care is included on the two-disc set, which started as an idea in December and was completed last month.

&#8220;We never would have done this unless we had a massive group that we wanted to help &#8230; It&#8217;s exciting to have such a big group coming. Usually there&#8217;s a big transition in the summer, where you lose around one-third of your people. It will be interesting to get a new group this large,&#8221; Gatto said.

While in Italy, Gatto and his team were able to talk to the soldiers and paratroops about everything from family services to the great relationship Warner Barracks has with the surrounding German community.

&#8220;We have a wonderful relationship with the community here. They welcome us with open arms and go to great lengths to make us feel comfortable &#8230; There&#8217;s a real sense of community here,&#8221; Gatto said.

This week about 200 people, including at least one person from each new family, will be traveling by bus to tour Warner for two days.

One of the main stops will be housing. Because such a large group is inbound at once, and most do not yet have official orders, the housing office and Department of Public Works have been trying to get out as much information as they can to the newcomers, said David A. Thompson, Warner DPW director.

This has included sending a housing representative with the team that went to Italy with floor plans and pictures, and scheduling walk-throughs of vacant units during the upcoming tour.

Thompson is confident that adequate housing will be available.