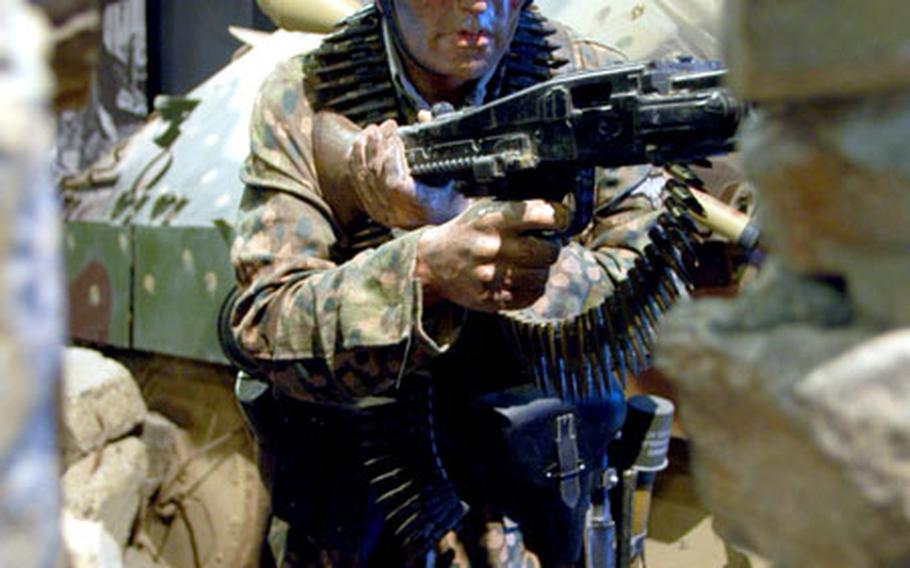 A German soldier appears to steel himself for the onslaught of a Russian tank crew in a re-created battle scene at the Imperial War Museum Duxford’s Land Warfare Hall. (Ben Murray / S&S)

A German soldier appears to steel himself for the onslaught of a Russian tank crew in a re-created battle scene at the Imperial War Museum Duxford’s Land Warfare Hall. (Ben Murray / S&S) Exhibits in the hall include hundreds of implements of ground combat used in almost a century of warfare, including oddities such as the German “Goliath” vehicle. It was to be remotely-controlled to creep up next to a pillbox or under a tank and then be detonated. (Ben Murray / S&S) DUXFORD &mdash; To many people around U.S. bases in England, Duxford means airplanes.

High-profile air shows and massive static displays, including the American Air Museum, are major draws at the former U.S. and RAF fighter base in this village on the outskirts of Cambridge, attracting mobs of aviation enthusiasts annually.

But in a far corner of the sprawling airfield complex is a lesser-known feature of the Imperial War Museum Duxford that, though it has little to do with airplanes, is one of the most impressive features of the facility.

The Land Warfare Hall at Duxford has one of the country&rsquo;s most comprehensive and detailed collections of ground combat weapons and vehicles from the last 100 years of conflict, laid out in a compelling enough fashion that alone is worth the price of admission (13 pounds).

The hall houses hundreds of weapons, vehicles, tanks, guns and interactive displays showing how many were used, situated so that visitors are funneled chronologically through the evolution of warfare from World War I to the present.

It&rsquo;s a lot of armor and metal that could make for repetitive viewing if not for the emphasis designers have put on creating a sense of realism in the museum, intended to make visitors feel as if they are walking through a war zone watching the tools of combat in use.

It&rsquo;s an effect that goes a long way toward making the exhibit almost a visceral experience.

To navigate the displays, for instance, visitors walk along a dusty wooden track strewn with pebbles and lined with barbed wire, like a pathway in an army camp, stepping among signs warning of land mines or other hazards.

Many of the vehicles and weapons are close enough to touch, allowing visitors to run their fingers along the tread of a Russian T-34 tank or stand next to a massive artillery piece.

Many are also set up to appear as though they are in action, with lifelike mannequins manning gun turrets and tanks. In one particularly complex display, a dummy of a German soldier stands in the ruins of a house where an 88 mm anti-aircraft gun sits; he looks anxiously over his shoulder at a team of attacking Russians. Next door, a replica Tiger tank breaks its way through a brick wall in a counterattack.

To add to the sense of realism, the hall employs another detail not often found museums: dirt. Weapons and vehicles appear worn and used, with dust on their armor and mud in their tracks.

The exhibit goes even further in the Normandy Experience, where visitors walk through a re-creation of an assault landing craft meant to feel and sound like the opening minutes of &ldquo;Saving Private Ryan.&rdquo;

Bullets whine and ping off the metal sides, men yell and machinegun fire rattles in visitors&rsquo; ears as they pass through. Inside (just past the hidden sniper taking aim from a ruined building) is a video display chronicling the Allied invasion of the continent and subsequent breakout into southern France and Germany.

But the Land Warfare Hall doesn&rsquo;t stop there. Also included in the Hall are exhibits on &ldquo;Monty,&rdquo; Field Marshall Bernard Montgomery, the famed British general; the war in the Pacific during World War II; the Korean War; and the modern tools of ground warfare in use in recent decades.

All in all, it&rsquo;s a comprehensive and engaging display of military might that takes at least an hour to navigate if much is to be absorbed. Not bad for an airfield.

Location: Just off of junction 10 on the northbound M11 or the A505 near the town of Royston, just south of Cambridge.

Admission: 13 pounds for adults, 11 pounds for seniors, free for children younger than 16. A season ticket is 40 pounds.