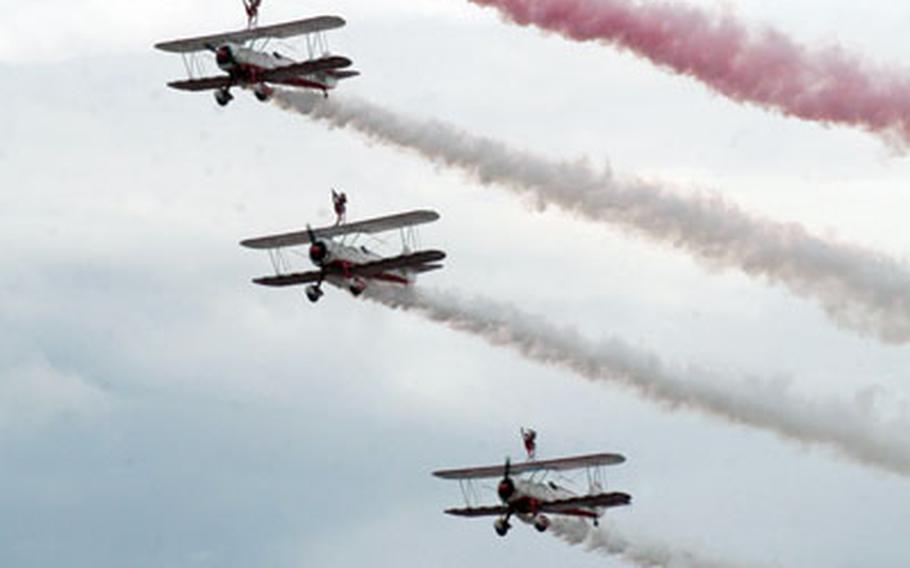 A formation of Stearman biplanes, qith "wingwalkers" on top of the wings, fly past crowds for the Flying Legends air show on Saturday at the Imperial War Museum in Duxford. (Sean Kimmons / S&S)

A formation of Stearman biplanes, qith "wingwalkers" on top of the wings, fly past crowds for the Flying Legends air show on Saturday at the Imperial War Museum in Duxford. (Sean Kimmons / S&S) 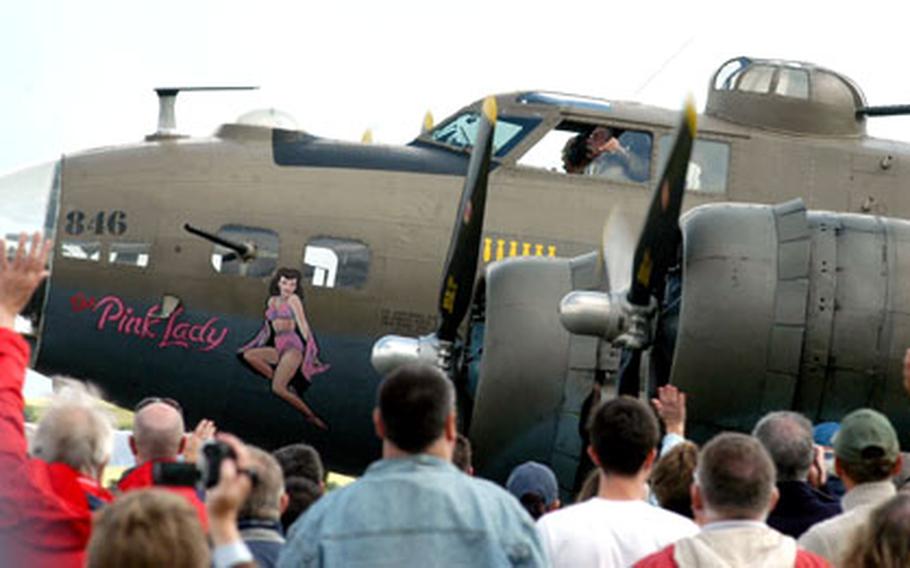 Pink Lady, a WWII B-17 bomber, taxis down the runway past spectators during the Flying Legends air show. (Sean Kimmons / S&S) 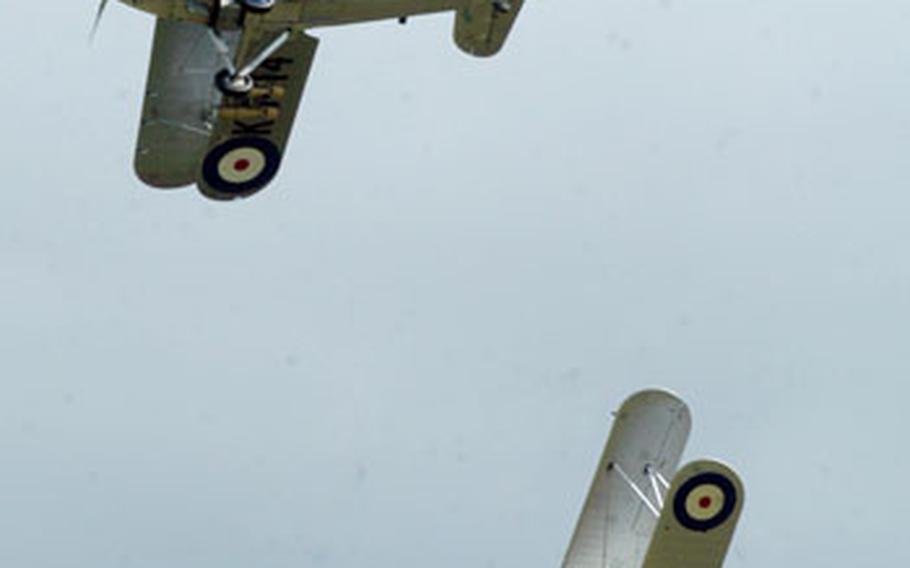 Hind and Nimrod biplanes show off their underbellies to a crowd gathered for the Flying Legends air show. (Sean Kimmons / S&S) 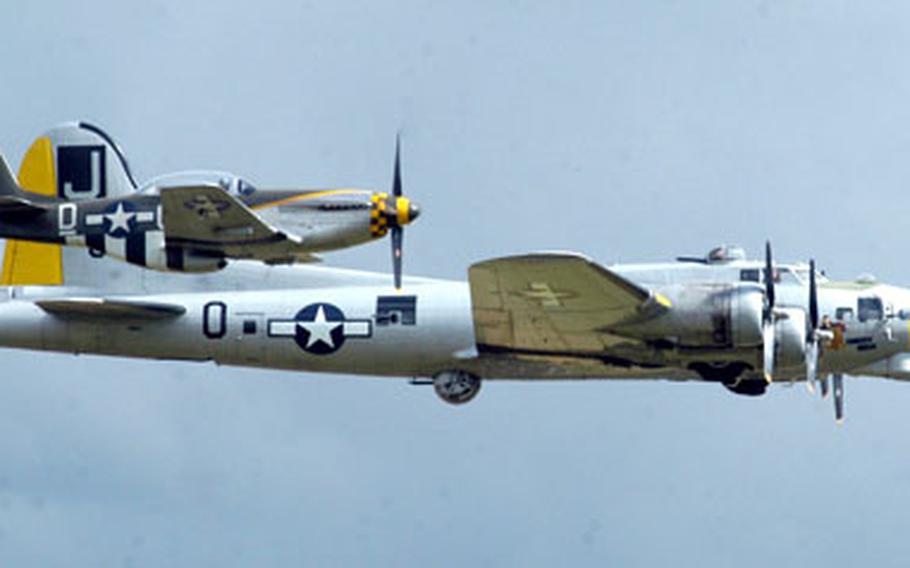 Liberty Belle, a WWII B-17 bomber, is flanked by a P-51 Mustang fighter plane during a flyover at the Flying Legends air show. (Sean Kimmons / S&S) 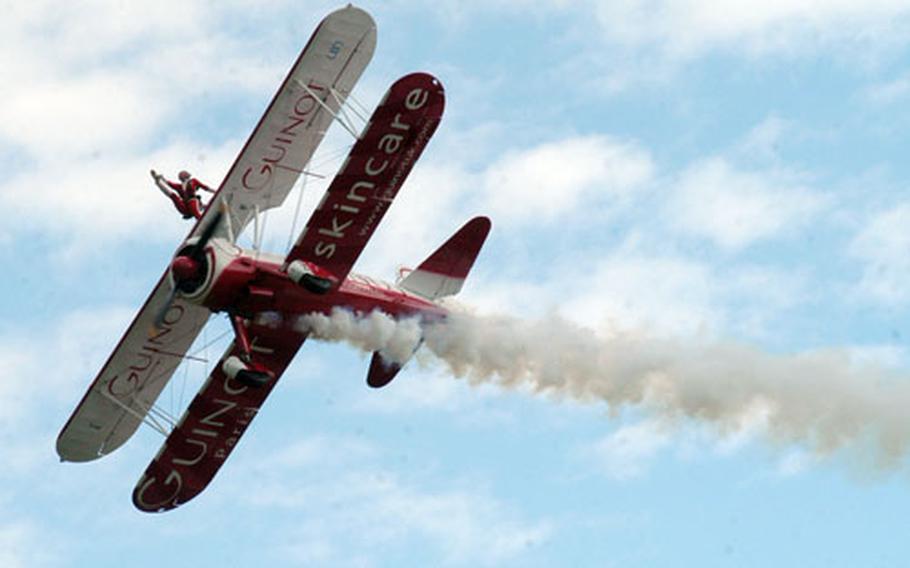 A Stearman biplane, with a "wingwalker" on top of the wing, flies past crowds at the Flying Legends air show. (Sean Kimmons / S&S)

DUXFORD &#8212; Flying any aircraft takes a combination of skill, savvy and straight-up guts.

But let&#8217;s take it back a bit, before pressurized cabins and all those knobs and levers, to the days of Spitfires, Lancasters and other World War II-era jets. Thousands of sorties flying over hostile territory full of German troops waiting to gun down whatever came soaring over the horizon.

These days of yesteryear were on display last weekend at the 90th annual Flying Legends Air Show at the Imperial War Museum in Duxford.

The sky was filled with the throb of old war birds, delighting thousands who attended with their vintage moves.

In a bit of aviation overdose, last weekend was to have featured the 2008 Royal International Air Tattoo, the world&#8217;s largest military air show. That event was canceled due to weather.

But those old jets said "pshaw" to the skies and soared regardless of the rain throughout the weekend at Duxford.

Ronald Diamond couldn&#8217;t help but feel a bit of nostalgic pride Saturday as the Avro Lancaster, a hulking four-engine bomber, tore through the sky once again.

Diamond flew the bomber through 30 missions over Europe during World War II from 1943 to 1946, including the bombing of Dresden, Germany, in 1945.

"I had one nasty mission," Diamond said, recalling one particularly deadly flight where his Lancaster lost two engines during an eight-hour mission. "It&#8217;s one of the finest aircraft built, in my opinion."

Diamond said he just did what he had to do. You were "a crew and you were happy," he said. "This brings back a lot of memories."

Air enthusiasts young and old milled about Duxford last weekend, including Chris Andrews of Brighton, who came with his World War II-veteran father.

"It&#8217;s the magic of these old aircraft," Andrews said, adding that the modern jets just don&#8217;t compare. "We prefer these, the Mustangs and the Spitfires. Just hearing them is fantastic."

As wing walkers kicked and danced atop bi-planes flying in formation, Dave Leonard watched from the ground dressed in vintage airman attire from days long gone.

His companion, Anne McArdle, said it was their second time at the show.