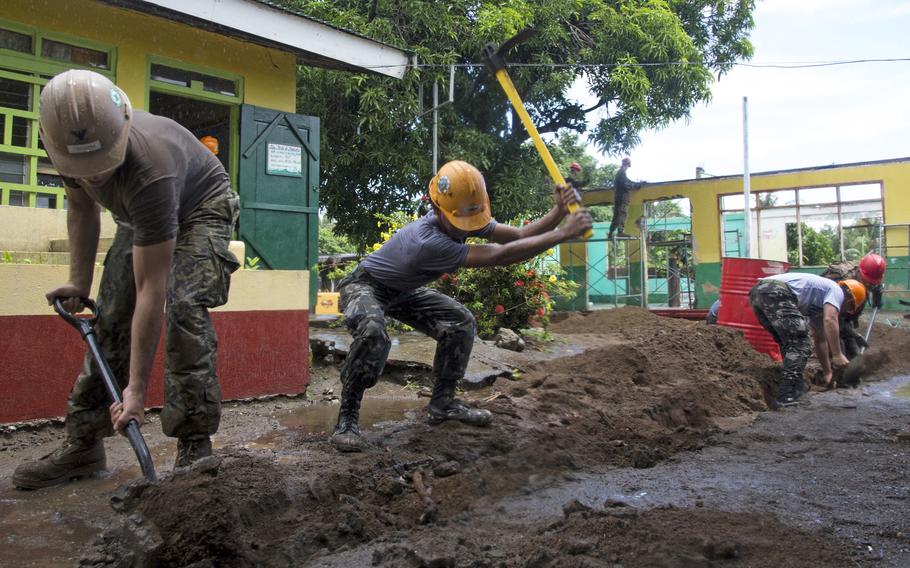 U.S. and Philippine soldiers complete a combined-joint operation during spring Balikatan drills in Jamindan, Philippines. New Philippine President Rodrigo Duterte announced Wednesday, Sept. 28, 2016, that bilateral war games starting next week on the islands will be "the last" his country will conduct with the United States. (Jerome Johnson/U.S. Navy)

The new Philippine president appeared to drive a wedge in relations with Washington even deeper by announcing that bilateral war games starting next week on the islands will be “the last” and vowing to pursue trade alliances with China and Russia.

During a speech Wednesday in Vietnam, Rodrigo Duterte said he would maintain the military alliance with the U.S. because of the countries’ 1951 defense treaty, but that the Philippines is only going forward with the PHIBLEX exercise because he doesn’t want to embarrass his defense secretary, The Associated Press reported.

“I would serve notice to you now that this will be the last military exercise,” he said. “Jointly, Philippines-U.S., the last one.”

A Pentagon spokesman, Cmdr. Gary Ross, said U.S. defense officials would continue to work with the Philippines despite Duterte’s comments.

“We continue to focus on our broad relationship with the Philippines, and will work together in the many areas of mutual interest, including counterterrorism, to improve the livelihoods of the Philippine people and uphold our shared democratic values,” Ross said.

With a reputation as a tough-talking maverick, Duterte often seems to speak and act without thinking issues through. That has generated public admiration for bluntly – and often profanely – telling the U.S. and other world powers to butt out of his brutal war on drugs while leaving his spokesman and Cabinet ministers to clean up the messes he leaves behind.

His statements on relations with Washington have raised questions whether he might scrap an agreement signed last month to allow U.S. forces to use bases in the Philippines and cozy up to China instead.

Earlier this month, Duterte called for U.S. special operators assisting in the archipelago’s fight against Islamic extremist to leave Mindanao island, and said he won’t allow his navy to conduct joint patrols with foreign powers near the South China Sea, apparently scrapping an agreement his predecessor reached with the U.S. before Duterte took office June 30.

Marine Corps spokesman Maj. Roger Hollenbeck said Thursday that Duterte’s comments haven’t affected U.S. preparations for PHIBLEX, which will bring 1,400 U.S. troops to the islands to train alongside 500 of their Philippine counterparts.

“We are planning it as normal,” he said. “We are getting on the same planes and ships to go there.”

Marines and sailors from the 3rd Marine Expeditionary Brigade and the Bonhomme Richard Expeditionary Strike Group are participating in the drills, according to a statement from the U.S. Embassy in Manila.

Troops will conduct an amphibious landing and carry out live-fire artillery training during the drills, which are designed to prepare the two militaries to work together in a disaster or armed conflict, the embassy said.

“The opportunity to train and build mutually beneficial capabilities with our Armed Forces of the Philippines partners is essential for sharpening our bilateral amphibious and humanitarian assistance capabilities, both hallmarks of the U.S. Marine Corps,” Brig. Gen. John M. Jansen, 3rd Marine Expeditionary Brigade commander, said in the statement.

“Exchanging expertise and cultivating our longstanding security alliance provides a cornerstone for security and stability in the region, and has for decades,” he said.

The drills will take place at Clark and Basa air bases in Pampanga, Marine Barracks Gregorio Lim in Cavite, Crow Valley in Tarlac, the Naval Education and Training Command in Zambales, on the island of Palawan and at Cagayan on Northern Luzon, said Capt. Ryan LaCuesta, a Philippines Marine Corps public information officer.

“[The exercise] will enhance interoperability between both nations and promote security cooperation in the region,” he said. “As with the other exercises, this activity is expected to validate the decades of friendship, partnership and cooperative engagement that had been established and was long time observed between the Philippines and the United States.”