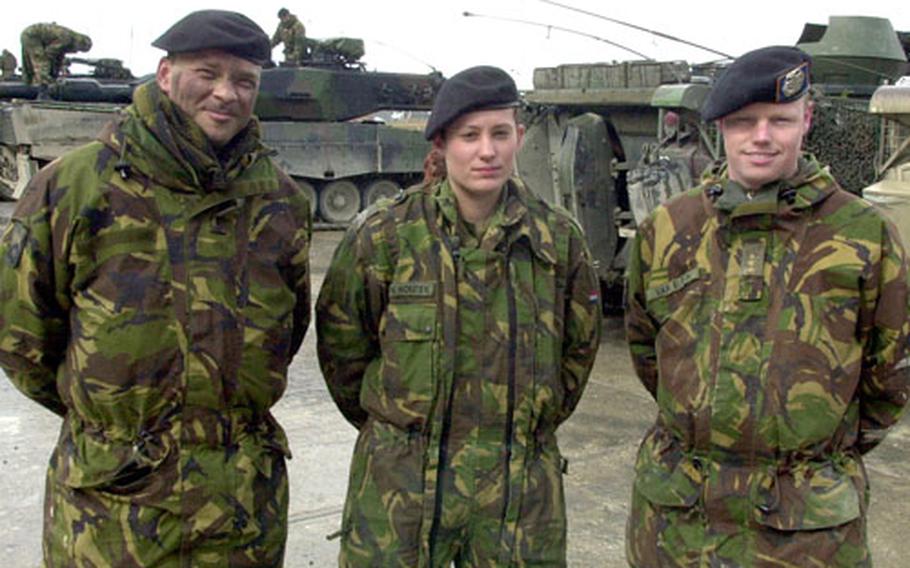 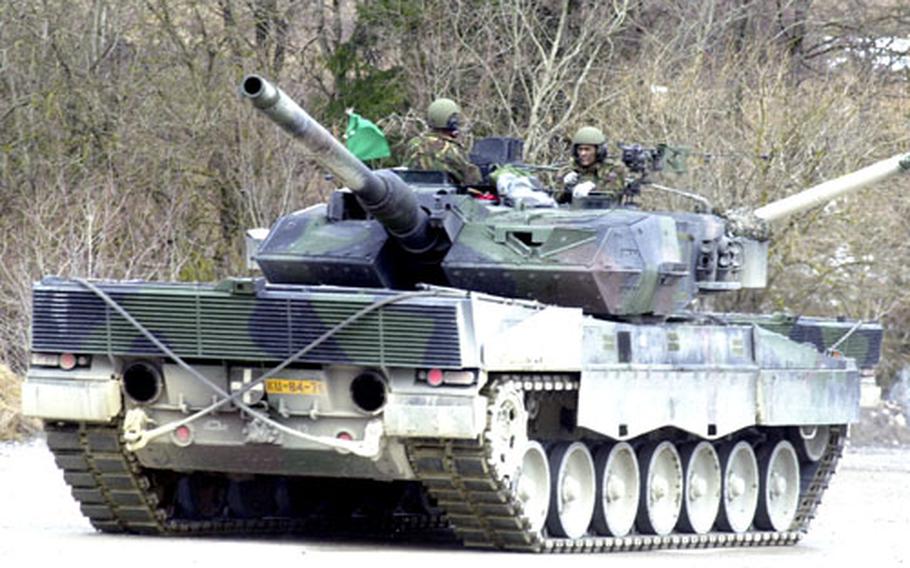 Cpl. Ramona Van Houten, one of only a few female tank gunners in the Dutch Army, trained at Grafenw&#246;hr for two weeks with 250 soldiers from the 42nd Tank Battalion, Hussars Prince of Orange Regiment.

Unlike the U.S. Army, the Dutch Army has no prohibition on females serving in combat units. Houten, for example, served with the 42nd&#8217;s Company B in Afghanistan last year.

What did U.S. soldiers downrange think about her going into combat?

Some female U.S. soldiers told her they&#8217;d also like to serve in combat units. Others were pleased with where they were, said Houten, who spent last week blasting holes in vehicle targets with the main gun of her Leopart II A6 tank &#8212; a weapon that can destroy another tank from more than two miles away.

Houten rated Grafenw&#246;hr as an excellent place to hone her tank gunnery skills.

The 42nd normally trains at Bergen-Hohne, a range in northern Germany that was part of the Dutch sector during the Cold War.

&#8220;This is much better. When you strike a target it falls down here. At Bergen-Hohne we have to count the holes in the targets,&#8221; she said.

Company B Commander, Capt. Dennis Bachrach, 35, also praised the ranges at Grafenw&#246;hr, where he was able to place three tank platoons alongside each other while they fired at targets &#8212; something that could never happen at a smaller training area.

The battalion&#8217;s commander and about 80 personnel will deploy to Afghanistan in July as part of a Provincial Reconstruction Team. A total of 1,600 Dutch troops are deploying, including the 42nd&#8217;s Company A, more special forces, an infantry battalion and helicopters, Van Elten said.

&#8220;The Dutch government has proven they take their international responsibilities seriously. We have been to Bosnia, Iraq, Afghanistan and Africa in recent years,&#8221; he said.

Last year the Dutch ended a two-year mission to Iraq that included 1,000 troops working in the south of the country, he said.

&#8220;This is the first training by Dutch troops at Grafenw&#246;hr in many years. We wanted to have a change of scenery for our tank crews and cooperating with Americans was another goal,&#8221; he said.