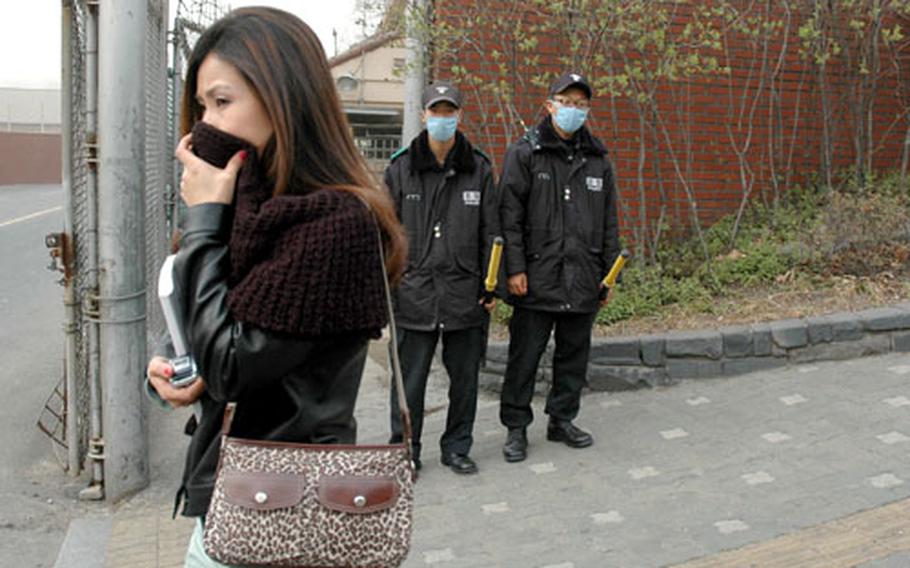 A woman walks in front of a gate to Yongsan Garrison shortly after 5 p.m. Saturday, shielding her nose and mouth from the dangerously high levels of yellow dust blanketing the city. (Teri Weaver / S&S)

He immediately began making calls to ensure that the military chain of command and on-base community members would be alerted to the threat. Crawlers ran across the American Forces Network television channels, he said, and announcements were made on AFN radio.

And unlike other years, those wishing to track the problem could do so on real-time English-language charts on the Web sites for the U.S. Army and 18th MEDCOM &#8212; www.seoul.amedd.army.mil &#8212; thanks to work with the Korean Meteorological Agency, which collects the data.

By simply clicking on the name of any of the U.S. bases in South Korea, a community member could find the exact dust threat.

Annual spring dust storms &#8212; called &#8220;hwangsa&#8221; in Korean &#8212; carry heavy metals, including lead, cadmium, copper and aluminum, from the Gobi Desert in northern China and southern Mongolia. The one- to 10-micron dust particles can aggravate bronchitis and cause pinkeye, sinusitis and ear infections, according to South Korean and U.S. officials.

&#8220;For humans, it can exacerbate, and now we know that it can even cause respiratory conditions, such as asthma,&#8221; he said. &#8220;We only thought that it exacerbated an existing condition but recent evidence suggests that it actually causes&#8221; the problems.

The dust also can cause other diseases, Lee said.

&#8220;The Foot-and-Mouth Disease that affected some of the cattle here in Korea was also thought to have been carried by the dust particles,&#8221; he said.

When the dusts spike each year, so do hospital visits and community complaints. In 2005, Area II officials promised residents a better system for informing them when the dust hit dangerous levels. Medical officials said they had the information but needed to find a way to better communicate with the community.

The storms hit each spring, Lee said, blanketing South Korea on an average of 12 days over a few months.

Saturday&#8217;s storm would be the fourth or fifth this year, according to medical officials.

To help commanders better understand the recommendations, medical officials defined &#8220;heavy exertion&#8221; as walking on hard surfaces at 3.5 miles per hour while carrying a 40-pound load; walking on loose sand at 2.5 mph with the same load; conducting field assaults; and running.

Commanders are urged to &#8220;identify soldiers at high risk and take additional protective measures&#8221; and &#8220;include Yellow Dust conditions in risk assessment for training events.&#8221;

People at high risk include young children, the elderly, anyone with heart disease or those with a lung disease such as asthma.