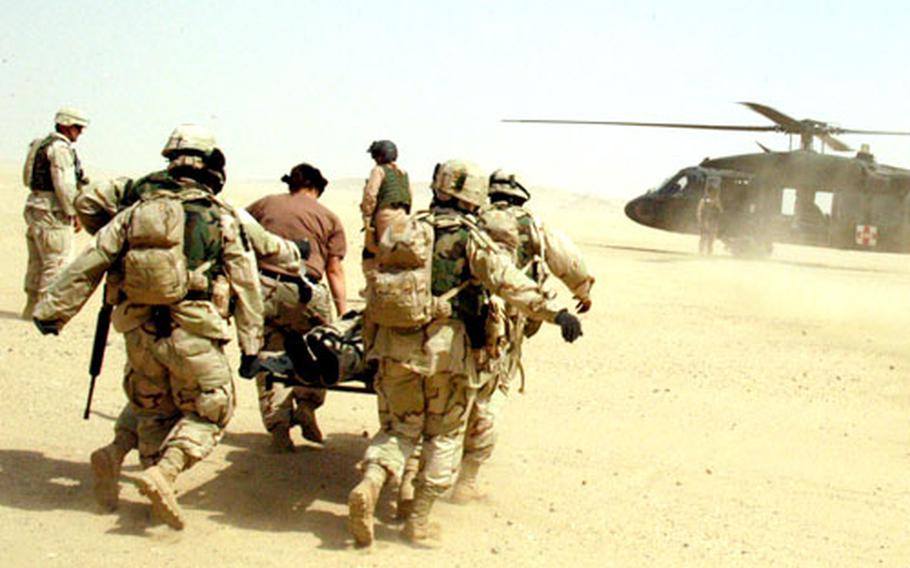 UDAIRI RANGE, Kuwait &#8212; The 2nd Infantry Division&#8217;s 2nd Brigade Combat Team suffered its first casualty in the desert Sunday when a soldier collapsed and was medically evacuated after suffering from bronchitis brought on by dust storms at Udairi Range.

The female soldier, with the 2nd Forward Support Battalion, was training at the desert range not far from the strike force&#8217;s base at Camp Buehring when the incident occurred.

The soldier collapsed and was carried to a combat lifesaver by four members of her unit; she was expected to return to her unit after being evacuated and treated, officials said.

Temperatures were more than 110 degrees at the time, and combat lifesaver Pfc. Rom Yous at first suspected the soldier had a heat injury, he said.

Yous, who has treated heat injuries in South Korea, elevated the soldier&#8217;s legs, attached an intravenous drip and loosened her clothing to ensure she had proper blood flow, he said.

&#8220;She was going through a seizure. She wasn&#8217;t responding so I had to assess the situation just by seeing what her symptoms were. I started the procedures of evaluating a casualty.

When a person is undergoing trauma the pulse should be much faster, Yous added.

The soldier was placed in a truck with the air conditioner turned on while soldiers wiped her face with wet towels and shaded it with a desert camouflage uniform top.

When a helicopter arrived, a team carried her on a stretcher to the machine through a swirling storm of dust stirred up by the whirling rotors.

Yous said he believed heat was not the cause of the collapse.

Later, the soldier was diagnosed with bronchitis brought on by dust storms, officials said.

On Sunday, both Udairi Range and Camp Buehring were exposed to heavy dust storms that, at times, reduced visibility to a few feet.