During deployments, little things are missed the most 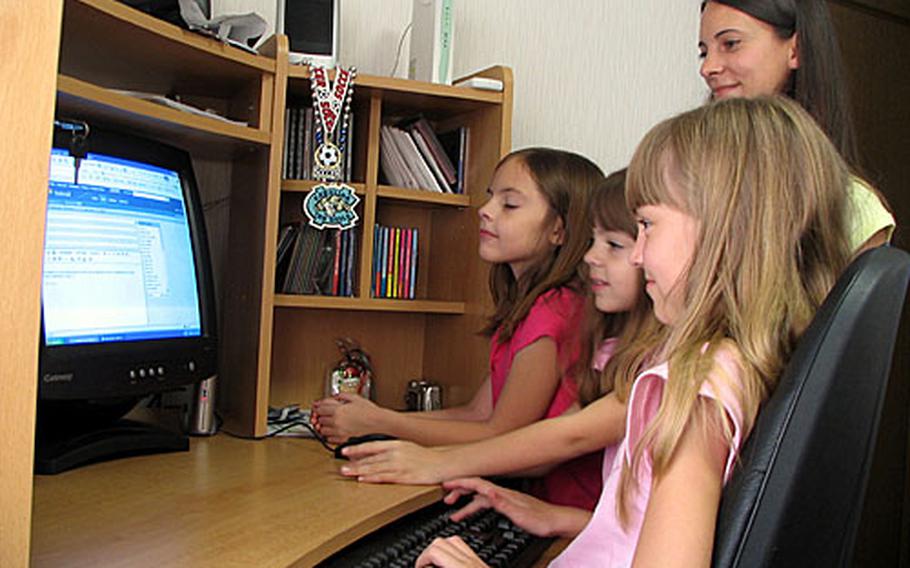 Kim Starnes, in the back, and daughters (from left) Maya, Keira and Jasmine, send an e-mail to husband and dad Chuck Starnes, who is on a four-month deployment to the Middle East. They e-mail several times a day and talk by phone four times a week to stay in touch. (David Allen / S&S)

Editor&#8217;s note: Stars and Stripes is following the Starnes family during the father&#8217;s deployment to the Middle East.

OKINAWA CITY &#8212; Deployments are hardest on the children, says Kim Starnes, whose Air Force husband is on a four-month deployment to the Middle East.

For Jasmine, 10, the toughest thing about her dad being away at war was him missing the ceremony where she was named to the A-B Honor Roll at Amelia Earhart Intermediate School.

Jasmine, Maya and Kiera, 6, are the daughters of Air Force Tech. Sgt. Charles &#8220;Chuck&#8221; Starnes, 31, who left in early January. He&#8217;s spent the time so far in Qatar, supporting combat operations in Iraq and Afghanistan.

&#8220;When any location has a problem or has a new requirement for their radio equipment &#8212; hand-held radios, tactical radios and satellite radios &#8212; they contact us,&#8221; Starnes said in an e-mail to Stars and Stripes.

His high schoool sweetheart, Kim, said she also has hot water &#8212; something they didn&#8217;t have at their Okinawa City home the day Chuck left.

&#8220;Fortunately, we got the hot water heater fixed that day and nothing else has gone wrong,&#8221; she said. &#8220;The most difficult thing I&#8217;ve had to deal with is the girls missing their daddy. Kiera has had the hardest time; we had a lot of tearful nights. Usually I just hold her and let her talk it out. Then we e-mail daddy or look at pictures of us together.&#8221;

She said she e-mails Chuck about three times a day and he calls her twice a week for 15 minutes at a time. She also can call him twice a week.

She keeps the girls busy, which helps take their minds off of daddy being gone.

Starnes is a ground radio technician with the 18th Communications Squadron. He says good communications is a two-way street.

&#8220;My wife keeps me in touch with all the things that are going on (back on Okinawa),&#8221; he said. To keep his mind off being so far from his family Starnes says he keeps busy.

He also has his XBox 360 and a small monitor for games and movies and spends most of the rest of his free time studying and working out.

Kim&#8217;s advice to other wives is to share your feelings with other spouses.

&#8220;There is always something crazy that happens in the family during every deployment,&#8221; she said, adding that one of her daughters broke both arms while her husband was gone once. &#8220;It tends to ease the tension to talk about it and know that everyone shares something in common.&#8221;

Her advice to other spouses is simple:

&#8220;Keep on a schedule,&#8221; she said. &#8220;Try to do the things they would normally do daily and set aside something fun with the kids every day, even if it&#8217;s just a few minutes. Also, find something that you like to do to release stress. I have found that going to the gym while the kids are in school helps me be ready for when they get home.&#8221;