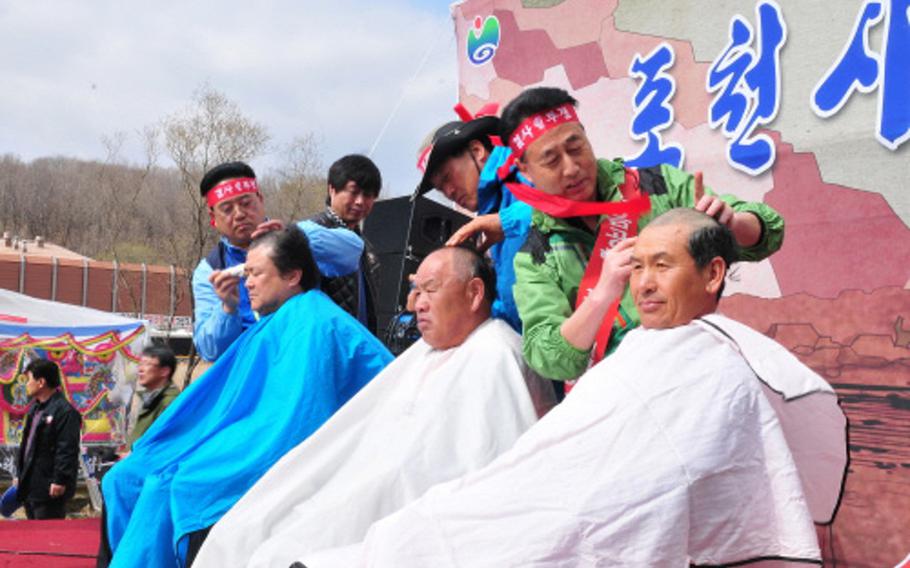 Men shave their heads in protest during a demonstration April 3, 2015, over a history of incidents near the Rodriguez Range live-fire complex in Pocheon, South Korea. The large range is frequently used by both U.S. and South Korean forces. (Courtesy of Pocheon city)

A citizens group living near the Rodriguez Range live-fire complex in South Korea is calling for 11 trillion won ($10.2 billion) as compensation for training-related incidents over the past six decades, organizers said Monday following a recent protest.

The call by the private Youngpyeong Seungjin Firing Range Task Force for payment from the national government to Pocheon, an area of about 160,000 residents living between Seoul and the Demilitarized Zone, came after the group demonstrated Friday against range accidents. The city of Pocheon has not endorsed the request.

On March 29, a non-explosive 105mm training round fired by a Stryker armored vehicle exited the sprawling range and damaged a nearby homeowner’s roof.

Senior 8th Army officials drove to the village and compensated the homeowner that day, while South Korea soldiers fixed the damaged roof.

Citizens group officials said they counted more than 1,000 people attending a protest Friday, which had been planned prior to the errant round incident, though the figure could not be independently confirmed. Local police told Stars and Stripes they did not count the crowd but had been told to expect about 500 people.

The group is now planning a larger protest in front of Yongsan Garrison in Seoul at the end of this month, said Yu Jai Hwan, one of the task force’s vice chairmen.

Besides the compensation to Pocheon, the group is calling for a ban on live fire after 10 p.m., as well as an end to any further errant shots.

Eighth Army officials told Stars and Stripes last week they are investigating how the 105mm round exited the range and have ceased all firing of the Stryker mobile gun in South Korea.

Rodriguez Range is a 3,390-acre complex used by both U.S. and South Korean forces throughout the year. While most of the surrounding area is rural, residents have long voiced complaints over noise, fires and other incidents.

Last year, the 2nd Infantry Division and Pocheon signed an agreement to hold a biannual forum “to collectively promote mutual cooperation,” according to a 2ID statement.