Chris Beier, right, and Fawzia Mirza play out a scene of "Sex Signals" Monday for a gathering of soldiers at the Patrick Henry Village Theater near Heidelberg. (Ben Bloker / S&S)

Chris Beier, right, and Fawzia Mirza play out a scene of "Sex Signals" Monday for a gathering of soldiers at the Patrick Henry Village Theater near Heidelberg. (Ben Bloker / S&S) 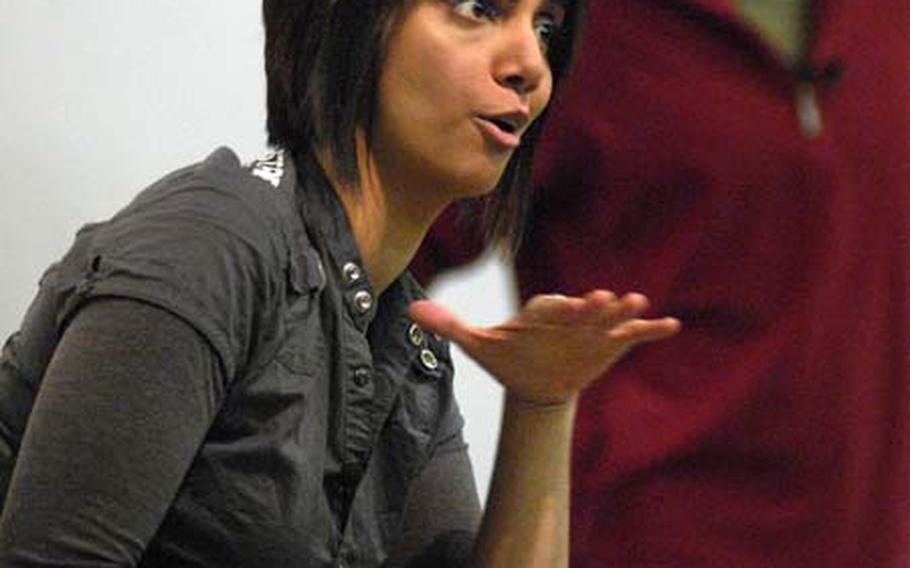 HEIDELBERG, Germany &#8212; A show that uses humor to get its point across about the seriousness of date rape made its Germany premiere Monday at the Patrick Henry Village Theater.

No Shakespeare was quoted. Two straight chairs completed the set, and the only prop was a bottle of water.

For about 90 minutes, two actors, one man, one woman, acted out scenarios, discussed gender stereotypes and cultural paradoxes, and made jokes for about 100 soldiers in the audience.

Fawzia Mirza, a former lawyer turned actress from Chicago, was partnered by Chris Beier, an actor from New York, who, after agreeing that women should be treated as human beings and not some Maxim magazine fantasy, ordered her to improvise being Jessica Alba in a Heidelberg meat locker.

The duo are part of "Sex Signals," a sexual assault awareness program that for years has been presented at college campuses to combat the most common, yet least prosecuted type of rape. Mirza and Beier are on tour throughout U.S. Army Europe this week.

"Blending a unique combination of improvisational comedy, education, and audience participation, SEX SIGNALS provides a provocative look at the issues of dating, sex, and ultimately, acquaintance rape," the group&#8217;s Web site says. "The two-person show explores how mixed messages, gender role stereotypes, and unrealistic fantasies contribute to misunderstandings between the sexes. At their worst, these factors enable some to view date rape as simple seduction, and for victims of rape to blame themselves for their vulnerability."

The training &#8212; part of a new Army campaign to try to address sexual assault within the ranks &#8212; followed a seminar given to U.S. Army Europe senior leaders a couple of weeks ago. In the leaders&#8217; all-day seminar, experts said the majority of men who force a woman into sex after a party or date are serial predators who premeditate their crimes, do it frequently and are usually not able to be rehabilitated.

But Monday&#8217;s training focused on those who can be educated that consent &#8212; including an explicit verbal "yes" if feelings are clouded by alcohol &#8212; is essential in non-exploitive sexual relations.

"The bottom line is you want to make sure that the people you are having sex with want to have sex," Beier said.

The show was also aimed directly at Army values of integrity and soldiers looking out for one another &#8212; including when they see a woman being targeted for rape with alcohol, drugs and guile.

"There are no innocent bystanders when it comes to the crime of sexual assault. Intervene. Act. Do something. Is that clear?" said Lt. Col. Robert White, U.S. Army Garrison Heidelberg commander in his introduction to the show.

The show is geared toward people ages 18 to 26 and the actors use impolite words, not to shock, but to bring realism to the show or attempt to reveal the hostility underlying the labels.

But the show actually got good reviews. "It was something different. Humorous and serious at the same time," said Spc. Don Cunningham, 26, and married.

Cunningham said he&#8217;d known women who&#8217;d been raped by men they thought were their friends, and that the show helped him become more aware of what a potential acquaintance rape looks like before it happens.

"I think if I were in a situation where I could help out, I would," he said.

Dates, times and locations for upcoming shows in Europe:

Tuesday: 9 a.m. at the Galaxy Theater in Kaiserslautern, Germany

Tuesday: 2:30 p.m. at the Flyers Theater in Wiesbaden, Germany

Wednesday: 9 a.m. at the PostTheater in Bamberg, Germany

Wednesday: 2 p.m. at the Ledward Theater in Schweinfurt, Germany

Thursday: 10 a.m. and 2 p.m. at the Vilseck Theater in Vilseck, Germany