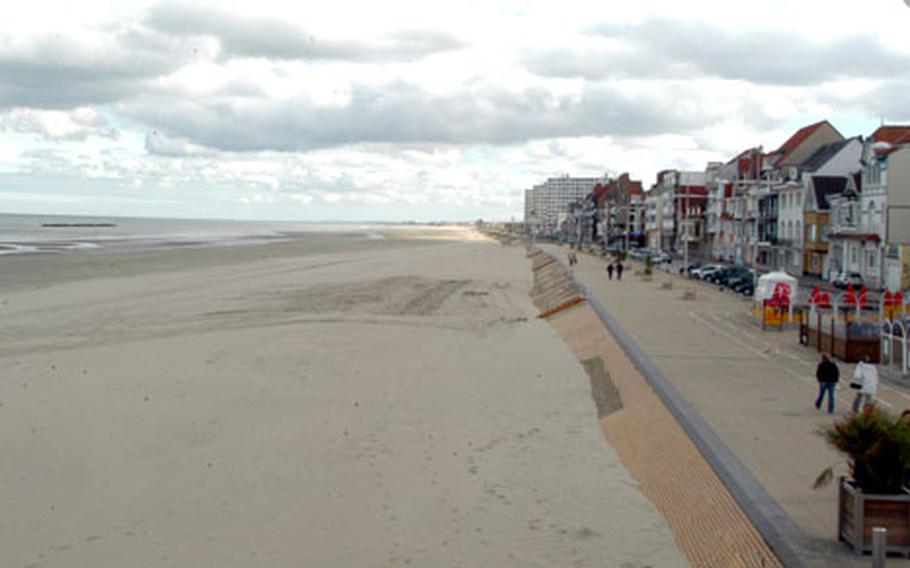 On this now-quiet stretch of beach in Dunkirk, the British staged a massive evacuation that helped boost morale in 1940. (Bryan Mitchell / S&S)

On this now-quiet stretch of beach in Dunkirk, the British staged a massive evacuation that helped boost morale in 1940. (Bryan Mitchell / S&S) The painting on the window of a boat in Dunkirk harbor. (Bryan Mitchell / S&S) DUNKIRK, France &mdash; The beach not far from this northern French port town appears similar to so many along the English Channel.

Long stretches of white sand extend into the horizon, flanked on one side by contemporary beach homes, villas and restaurants vying for the best ocean view, and on the other by a gentle sea.

But there&rsquo;s something special about this patch of French sand, something nearly mythical that captures the shared Franco-British struggle of World War II like few other places &mdash; save possibly the hallowed beaches at Normandy.

This beach, and the events that unfolded here in the spring of 1940, have become part of English lore just as much as the Battle of Britain or Lord Nelson&rsquo;s triumph in the Battle of Trafalgar.

Nearly two years before the United States entered the war, the British, French and Belgians had seriously underestimated the Nazi forces and hundreds of thousands of troops were forced to retreat from a German assault to this port town, according to an account by David J. Knowles, author of &ldquo;Escape From Catastrophe, 1940 Dunkirk.&rdquo; Portions of the account were published on the British Broadcasting Corp.&rsquo;s Web site.

Outgunned, outnumbered and seemingly out of luck, all the Allied forces could hope for was to fight another day.

The British commander had sent destroyers and transport ships to evacuate the troops, but they only expected to have time to ferry about 30,000 troops, Knowles wrote.

&ldquo;However, before long, the harbor became partially blocked by ships sunk in consistent attacks from enemy aircraft. It became necessary to take the troops off the nearby beaches as well &mdash; something that was thought to be an almost impossible task because of shallow water,&rdquo; he wrote.

So a call went out across Britain for all possible water-going vessels to assemble for an impromptu rescue.

Hundreds of skiffs, motorboats, fishing vessels, trawlers, paddle steamers, lifeboats and just about anything else that floated set sail from England and converged on the beach to ferry 300,000 troops to safety in the matter of a few weeks, according to the Knowles account.

It was a tactical defeat, but it imbued the British with a sense of national pride and accomplishment.

&ldquo;It seemed like a victory in just getting the troops back &mdash; over a third of a million of them &mdash; to fight another day,&rdquo; Knowles wrote.

Today, Dunkirk is one of the busiest port towns in France, and much of the city has moved on from its date with world history. Hundreds of travelers and transport vehicles debark ferries from Dover and pass through the town each day on their way to points across Europe.

But it&rsquo;s worth a stop for a visit.

The city center is utilitarian and efficient, with a staple of typical French eateries &mdash; crepes and souffles too delicious to ignore &mdash; and a host of lively bars where football and darts still dominate, but with a noticeably continental flavor.

The port has recovered from the devastation suffered during the war and is now home to an impressive array of posh yachts and sleek sailboats moored by up-scale waterside restaurants.

Visitors can also rent sailboats or charter a yacht for a fishing expedition or make their way to the edge of town to visit the planetarium. There is also a Museum of Fine Arts that features works from the 16th century onward.

But a tour of Dunkirk is incomplete without a brief visit to the beach, to lay eyes upon the site where the Allies and their civilian saviors used every bit of ingenuity, resourcefulness and moxie they could muster to fight another day.