Dunford: US will stand by its commitments to defend its NATO allies 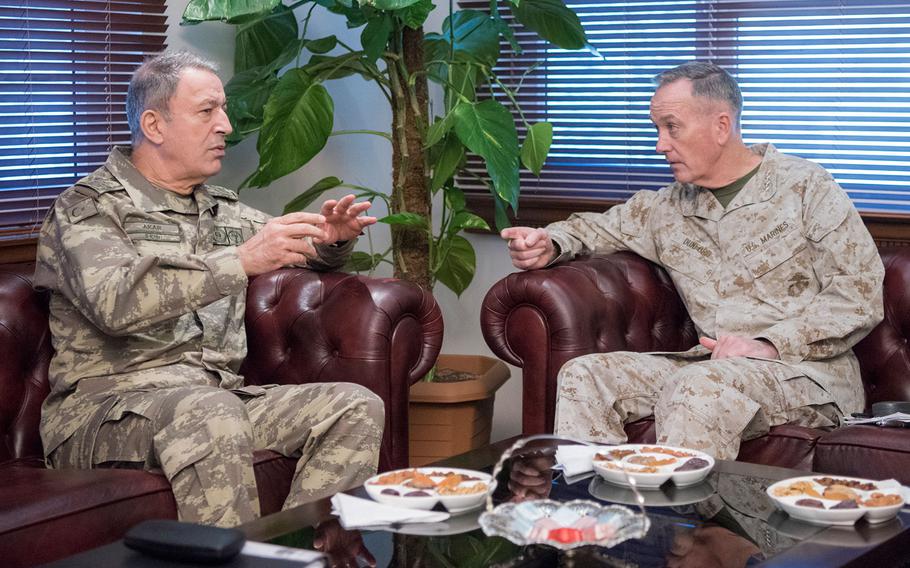 WASHINGTON — The United States will stand by its commitments to defend its NATO allies against any threats, including those generated by Russia, Gen. Joseph Dunford, chairman of the Joint Chiefs of Staff, said Thursday.

Dunford’s pledge was the fourth from high-ranking members of President Donald Trump’s administration to reassure its alliance partners in the last week that the United States would defend Europe against threats generated by Russia or other countries. The U.S. commitment to NATO had come under question during Trump’s presidential campaign.

“I think it’s pretty clear the administration – Vice President [Mike] Pence, Secretary [of State Rex] Tillerson, Secretary [of Defense Jim] Mattis have all reconfirmed our commitment to NATO over the past week,” Dunford said, referring to two separate security conferences that Mattis and Tillerson attended last week in Germany.

Russia’s rapid modernization of its nuclear and conventional forces and other non-military activities, such as hacking, has made it a top security concern for the United States, Dunford said, describing Russia’s actions as just “below the threshold of conflict” and clearly aim to destabilize NATO alliance.

“They [Russia] employ every unconventional operation -- information operations, cyber, certainly a military posture aspect of it, economic coercion, political influence to advance their objectives – at the end of the day what they seek to do is undermine our ability to meet our alliance commitment with NATO and the cohesion of the NATO alliance,” the Marine general said.

Along with Russia, Dunford cited China, Iran and North Korea as the top security concerns for the United States.

Dunford was speaking at the Brookings Institution, a think tank in Washington, D.C., just days before he and Mattis are expected to provide new options on how to defeat the Islamic State group as part of a 30-day Pentagon review requested by Trump on Jan. 28. But on Thursday, Dunford would not confirm news reports that the Pentagon review includes the option of sending more U.S. ground forces to Syria. There are about 500 U.S. special operators in the civil war-torn country now.

“As we present options to the president … we need to think about how do the facts on the ground support the political process in Geneva that is going to address long-term stability and security inside of Syria,” he said.

The recurring U.N.-backed peace negotiations in Geneva to find a political solution to the Syrian conflict began again Thursday.