Dunford: US soldiers ambushed in Niger fought for an hour before calling for help 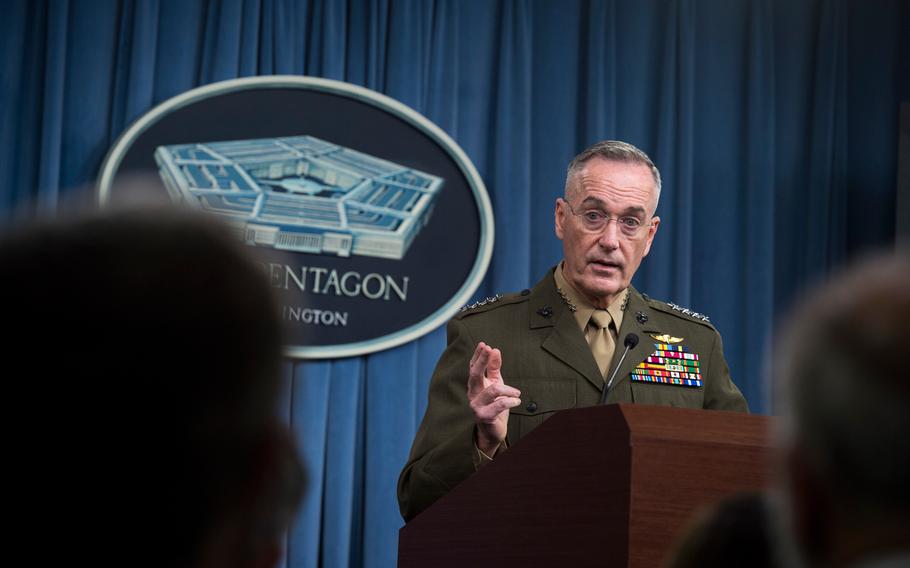 Chairman of the Joint Chiefs of Staff U.S. Marine Corps Gen. Joe Dunford speaks with media about recent military operations in Niger during a briefing Oct. 23, 2017, at the Pentagon in Washington, D.C. (Brigitte N. Brantley/Department of Defense)

WASHINGTON — Green Berets fought off an ambush by Islamic State militants in Niger for an hour before calling for help, a sign that the U.S. soldiers and their Nigerien counterparts might have believed they had the attack under control, the top U.S. general said Monday.

The U.S. forces, on a patrol near Niger’s border with Mali, eventually made a call for support as they battled insurgents armed with rocket-propelled grenades, machine guns and small arms, Marine Gen. Joseph Dunford, chairman of the Joint Chiefs of Staff, told reporters at the Pentagon.

French forces responded to the call with Mirage jets, which took 30 minutes to mobilize and 30 minutes to arrive on the site of the attack, he said. But no bombs were dropped. French armed helicopters and a Nigerian quick-reaction force showed up later that afternoon.

“When they didn’t ask for support for that first hour, my judgment would be the unit thought they could handle it without that additional support,” Dunford said in the most-detailed public accounting of what happening during the Oct. 4 attack that resulted in four U.S. soldiers being killed and two others injured. Five Nigerien troops were also killed in the ambush.

The roughly 40-person U.S.-Nigerien patrol, which included about 12 U.S. soldiers, came under attack by about 50 ISIS fighters mid-morning Oct. 4 as the unit was making its way back to its operational camp, Dunford said. The patrol had left the Niger capital Niamey on Oct. 3 to meet with local leaders in an area near the village of Tongo Tongo about 53 miles to the north.

Staff Sgts. Bryan C. Black, Jeremiah W. Johnson and Dustin M. Wright and Sgt. La David Johnson, all assigned to the 3rd Special Forces Group at Fort Bragg in North Carolina, were killed in the attack. Two other soldiers were injured on the battlefield and evacuated by French military, later arriving at Landstuhl Regional Medical Center in Germany for treatment. The reliance on French assets was part of the existing casualty evacuation plans, Dunford said.

Later on the afternoon of Oct. 4, French attack helicopters arrived on the scene along with a Nigerian quick-reaction force to provide more support “where our troops were in contact with the enemy,” Dunford said.

Many questions remain about the attack and what went wrong, including how Johnson’s body, which was most likely recovered by Nigerien troops, was missing for nearly 48 hours.

Dunford said the military is still trying to piece together what happened between the start of the patrol Oct. 3, the ambush Oct 4. and Johnson’s body being recovered Oct. 6.

U.S. Africa Command is conducting an investigation into what went wrong, which will probe whether the command has sufficient intelligence gathering assets to measure potential threats. The FBI is also investigating the attack.

“We’ll find out in the investigation exactly why it took an hour for them to call,” Dunford said.

The 12-person U.S. team departed their operational center in the capital of Niamey and traveled about 52 miles north near the village of Tongo Tongo on a civil-military reconnaissance mission. The exact configuration of the unit hasn’t been detailed by military officials, but “A-team” special operations forces typically included a force of 12 that is led by a captain. The unit is rounded out with a warrant officer and non-commissioned officers.

The United States maintains a drone site in Niger, which has emerged as the centerpiece for U.S. operations in western Africa. A surveillance aircraft, operating in the area, was on the scene within minutes after a call for support to provide intelligence, surveillance and reconnaissance, Dunford said. However, it was unclear what information was captured or whether the drone was armed for attack. Dunford said the drone did not launch a strike and he hadn’t witnessed video from the surveillance.

Dunford said AFRICOM is examining whether that mission expanded beyond its original scope.

"What happened after they began to execute, in other words, did the mission change?

That is one of the questions that's being asked. It's a fair question but I can't tell you definitively the answer to that question," Dunford said.

The U.S. military mission in Niger dates back decades, and Dunford said the United States has been an off-and-on military presence in the country for 20 years. However, more permanent operations in the country date back only five years. There are 800 U.S. troops in Niger, and more than 6,000 forces in 53 countries throughout Africa. Outside of Djibouti in eastern Africa, Niger now has the largest concentration.

The operation in western Africa has gained momentum during the past year as the United States works with local forces involved in battling a range of militant groups, such as al-Qaida affiliates, Boko Haram and local ISIS offshoots.

In the wake of the attacks, questions have emerged about whether French or U.S. aircraft have the authorities to carry out strikes if its forces are under attack. Dunford said they have the authority to fire when needed.

“U.S. forces and coalition forces in the area don’t have any limitations…. We have the inherent right,” he said.

U.S. forces in Niger will only accompany Nigerien soldiers on patrols when it has been determined that enemy engagement seems doubtful, Dunford said.

“We will only accompany our partner forces when chances of enemy contacts are unlikely,” he said.

AFRICOM has warned it lacks sufficient search and rescue as well as intelligence gathering assets in Africa, delivering a red flag to Congress in March about its operational shortfalls.

Dunford said AFRICOM is now back to conducting normal advisory operations in Niger.