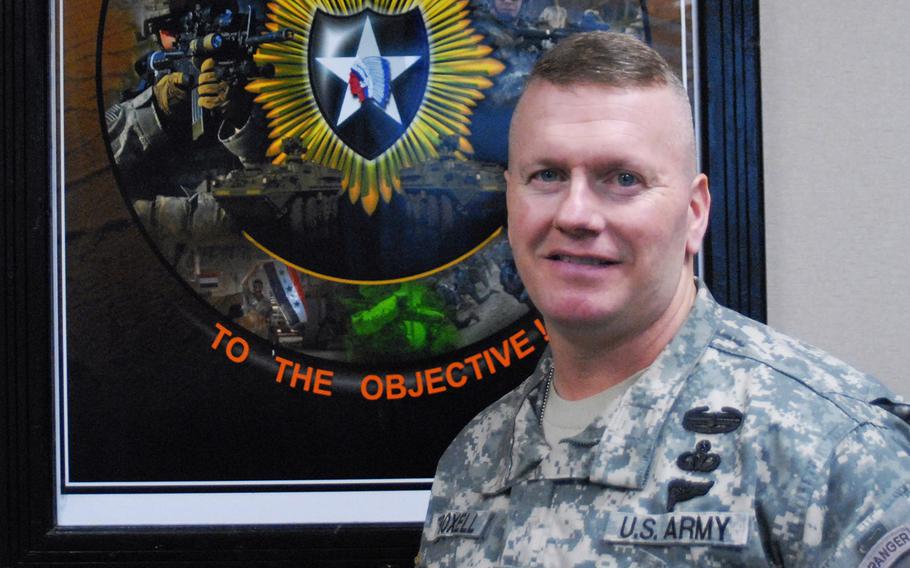 Command Sgt. Maj. John Troxell in front of his poster commemorating his service with the 4th Stryker Brigade. (U.S. Army)

WASHINGTON — An Army noncommissioned officer with 33 years of service has been selected as senior enlisted adviser to Marine Gen. Joseph Dunford, chairman of the Joint Chiefs of Staff.

“Sgt. Maj. Major Troxell is someone soldiers, airmen, Marines and sailors can look up to,” the general said. “He can inspire people, and he is someone I trust to tell me things straight.”

The senior enlisted adviser to the chairman serves as the principal military adviser to Dunford and Defense Secretary Ash Carter on issues pertaining to the enlisted force, such as military standards, professional development, pay and promotion, quality of life and awards.

Troxell, 51, who enlisted in the Army in 1982 as an armored reconnaissance specialist, has served in several senior noncommissioned officer roles including as the senior enlisted adviser for I Corps at Joint Base Lewis-McChord in Washington. He also served as the senior NCO for the U.S.-led International Security Assistance Force-Joint Command in Afghanistan. He serves now as the command senior enlisted leader of the United Nations Command, Combined Forces Command and United States Forces-Korea in Yongsan, South Korea.

He’s a veteran of five combat deployments including Operation Just Cause in Panama, Operation Desert Shield-Storm and three post-9/11 tours -- two in Iraq and one in Afghanistan.