Dunford: Russia is ‘greatest threat’ to US security 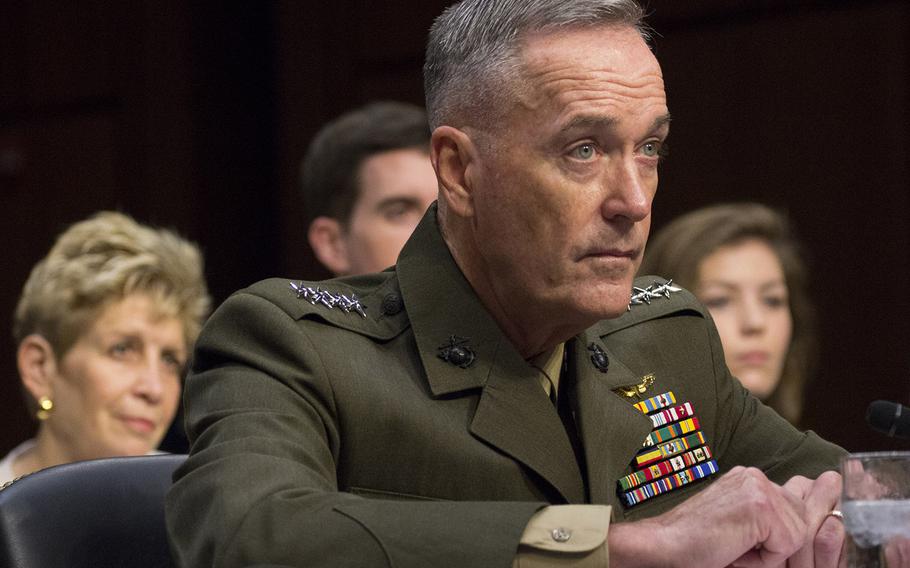 Gen. Joseph F. Dunford, Jr. listens to opening statements during a Senate Armed Services Committee hearing on his nomination as chairman of the Joint Chiefs of Staff on Capitol Hill, July 9, 2015. Behind him are his wife, Ellyn, son Patrick and niece, Jenna Sartucci. (Joe Gromelski/Stars and Stripes)

Gen. Joseph F. Dunford, Jr. listens to opening statements during a Senate Armed Services Committee hearing on his nomination as chairman of the Joint Chiefs of Staff on Capitol Hill, July 9, 2015. Behind him are his wife, Ellyn, son Patrick and niece, Jenna Sartucci. (Joe Gromelski/Stars and Stripes) 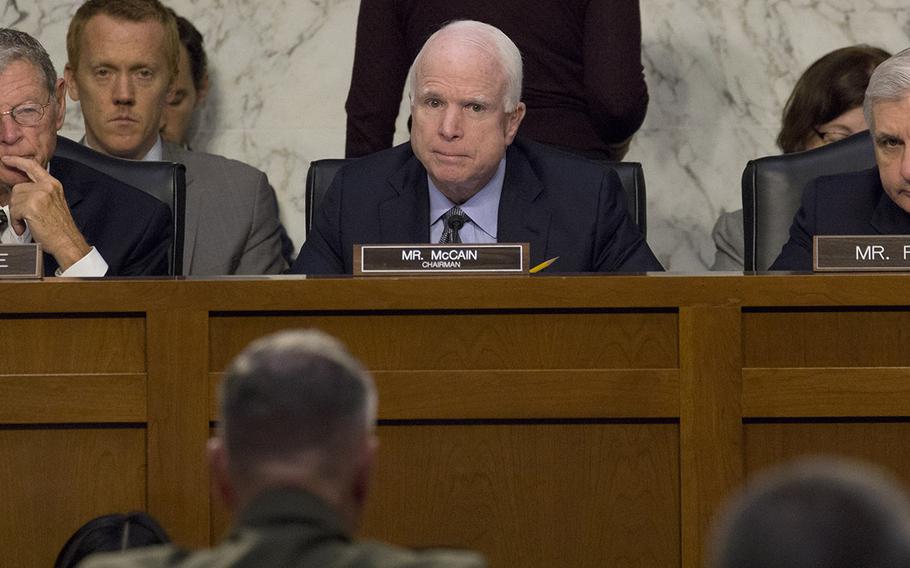 WASHINGTON — The nominee for the next chairman of the joint chiefs told a Senate committee Thursday that Russia is a bigger threat to the United States than the Islamic State.

Gen. Joseph F. Dunford Jr. said it would be reasonable to provide weapons to the Ukraine following the Russian annexation of Crimea and a military buildup along the country’s border.

“Russia presents the greatest threat to our national security,” he said.

The Armed Services Committee pressed him on Russia and the war in Iraq and Syria as part of a confirmation hearing. The 59-year-old Marine Corps commandant was nominated in May by the Obama administration to succeed Gen. Martin Dempsey.

Dunford called recent Russian aggression “alarming” -- a comment that could ratchet up tensions between Washington and Moscow, which have reached the highest point since the end of the Cold War more than two decades ago.

The general was a battlefield commander in Iraq and Afghanistan and has been Marine commandant for a year. If confirmed, he would be President Barack Obama’s top military adviser, playing a key role in charting a strategy to counter Russia and fight the Islamic State at a time when the current war effort appears to be foundering.

The Armed Services Committee heard Dunford’s testimony and could soon vote on whether to pass the nomination to the full chamber for a final vote. But first, his nomination must clear the Senate, where many Republican lawmakers favor a tougher stance toward Russian President Vladimir Putin and are frustrated with a lack of progress in Syria and Iraq.

The U.S. program to train and equip moderate Syrian rebels has come under scrutiny after Defense Secretary Ash Carter stunned lawmakers by disclosing that only 60 fighters had made it through the stringent vetting process.

Dunford said the military must weed out Syrian candidates who don’t sign a pledge not to fight the forces of Syria President Bashar Assad and cannot offer military assistance once they return to the country to fight. The Obama administration’s current war policy prohibits confrontations with Assad.

“We do not have authority to take action against Assad’s forces unless that [current U.S.] policy is changed,” Dunford said.

The train-and-equip program has attracted 7,000 volunteers, and 1,700 have been vetted and completed the screening necessary to begin training, according to Pentagon spokesman Capt. Jeff Davis.

Dunford said progress on training the proxy forces could move more quickly despite the prohibition on fighting Assad.

“They think they’ve learned some things in the vetting process about the first 60,” he said.

Sen. John McCain, R-Ariz., chairman of the committee, said the U.S. is expecting the Syrians to fight for its cause without offering any protection from “barrel bombing” by the Assad regime when they return to the battlefield.

Syria is embroiled in a complex civil war that has killed hundreds of thousands. The Obama administration has balked at a confrontation with Assad, hoping to persuade his opposition to turn their guns toward the Islamic State, which has seized vast territory in the country.

Last fall, Congress approved an Obama administration plan to spend $500 million over three years to train more than 16,000 Syrian fighters — about 5,400 each year — to fight the hardline group in its stronghold.

The Pentagon has spent “roughly half” of the money on training and equipping the fighters with small arms and ammunition, according to the news site Politico.

Sen. Tim Kaine, D-Va., said the Pentagon and administration should evaluate its current rules of engagement to protect the fighters being backed in Syria.

“I do not believe we should be sending U.S.-trained folks into a theater of war without giving them a guarantee they will be protected,” he said.