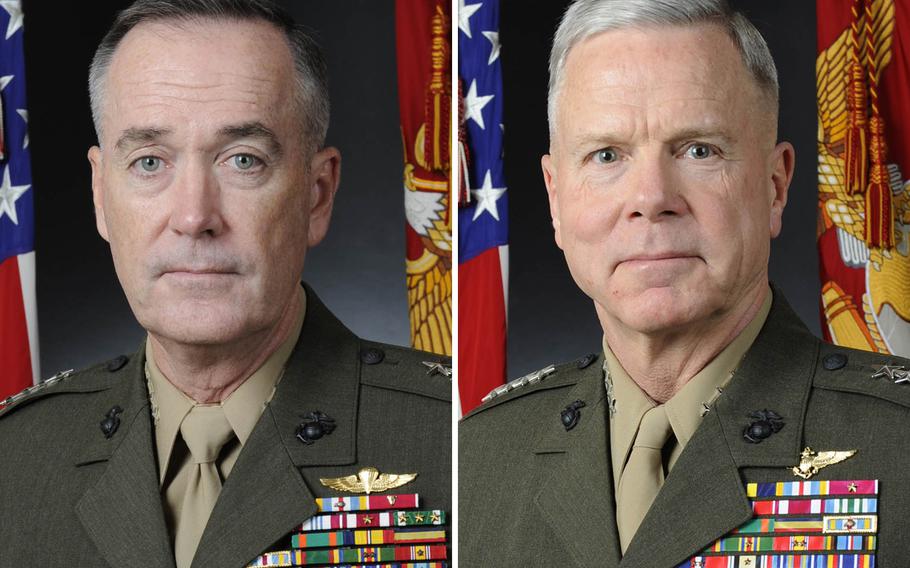 He would replace Gen. James F. Amos, who has held the position of commandant since October 2010.

The announcement comes just months before NATO’s current mission in Afghanistan is set to conclude by the end of 2014.

“Thanks to (Dunford’s) exceptional abilities, and his commitment to the men and women under his command, we have made progress in Afghanistan and remain on track to responsibly bring America's longest war to an end later this year,” Secretary of Defense Chuck Hagel said in a statement. “No one is better suited to write the next chapter in Marine Corps history than Joe Dunford, and I look forward to working with him in his new role upon his confirmation by the U.S. Senate.”

Pentagon spokesman Col. Steve Warren did not say who would replace Dunford in Afghanistan, nor did he outline a timeline for the move.

“Gen. Dunford, of course, has done tremendous work in Afghanistan,” Warren told reporters. The nomination still needs to be confirmed by the Senate.

Thousands of U.S. troops have departed Afghanistan under Dunford’s command, and President Barack Obama recently outlined a plan that would keep almost 10,000 servicemembers in the country past the end of the year to continue training Afghan forces and for counter-terrorism operations.

Dunford took command as Obama pledged to reduce the number of U.S. troops by half by the beginning of 2014. Dunford’s tenure included not only overseeing the massive drawdown of U.S. and coalition forces, but the political fight over keeping troops in Afghanistan. Afghan President Karzai refused to sign a deal that would keep American troops around longer, but Dunford was among the military leaders lobbying skeptical politicians in both Kabul and Washington. Both of Karzai’s potential successors have said they will sign the troop agreement, and Dunford or his successor will be instrumental in shaping the force that remains.

“Joe is one of the most knowledgeable and talented leaders and thinkers in the military today,” Amos said in a statement. “He has commanded and excelled at every level. His tenure as commander of International Security Assistance Force (ISAF) and U.S. Forces - Afghanistan over the past 18 months has been extraordinary, and is testament to the full measure of the man.”

Before taking the top job in Afghanistan, Dunford served as the assistant Marine Corps commandant. A career infantry officer, he led Regimental Combat Team 5 during the invasion of Iraq in 2003.

Amos’ career spanned leadership roles in a wide variety of Marine aviation units and he also previously served in the No. 2 spot as assistant commandant.