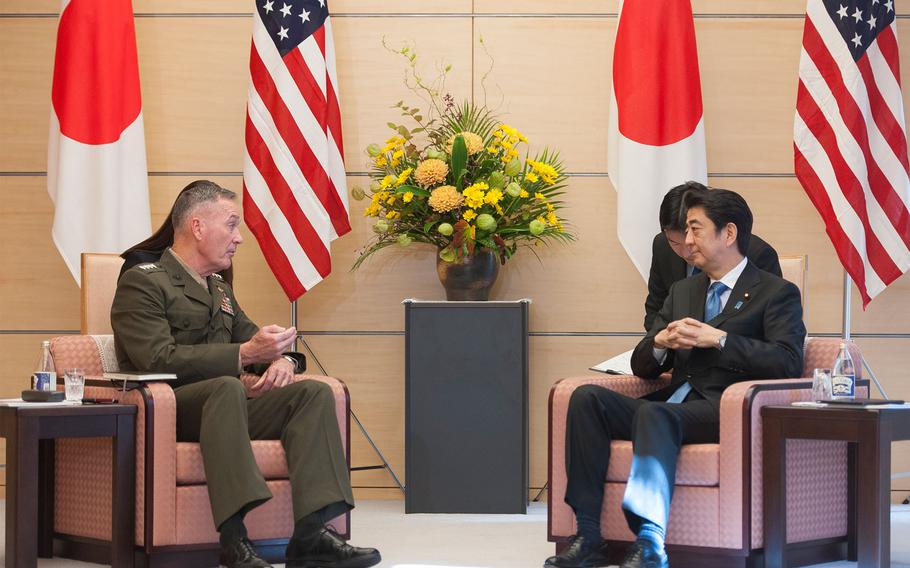 Marine Corps Gen. Joseph F. Dunford Jr., chairman of the Joint Chiefs of Staff, meets with the Prime Minister of Japan Shinzō Abe at his official residence, the Kantei, in Tokyo, Nov. 4, 2015. (Dominique A. Pineiro/Dept. of Defense photo)

YOKOTA AIR BASE, Japan — The chairman of the Joint Chiefs of Staff met with Japanese leaders this week to discuss freedom of navigation, changes to the U.S.-Japan alliance and threats and opportunities in the region, officials said.

Gen. Joseph F. Dunford, who stopped in Japan after visiting South Korea earlier in the week, met with Prime Minister Shinzo Abe, State Minister of Defense Kenji Wakamiya and Maritime Self-Defense Force Adm. Katsutoshi Kawano, the chief of defense, during a round of visits Wednesday, according to a Department of Defense statement.

Dunford said he discussed freedom of navigation with Abe, and the general referred to guided-missile destroyer USS Lassen passing last week within 12 miles of Subi Reef, an artificial island built up by China among the Spratly Islands in the South China Sea.