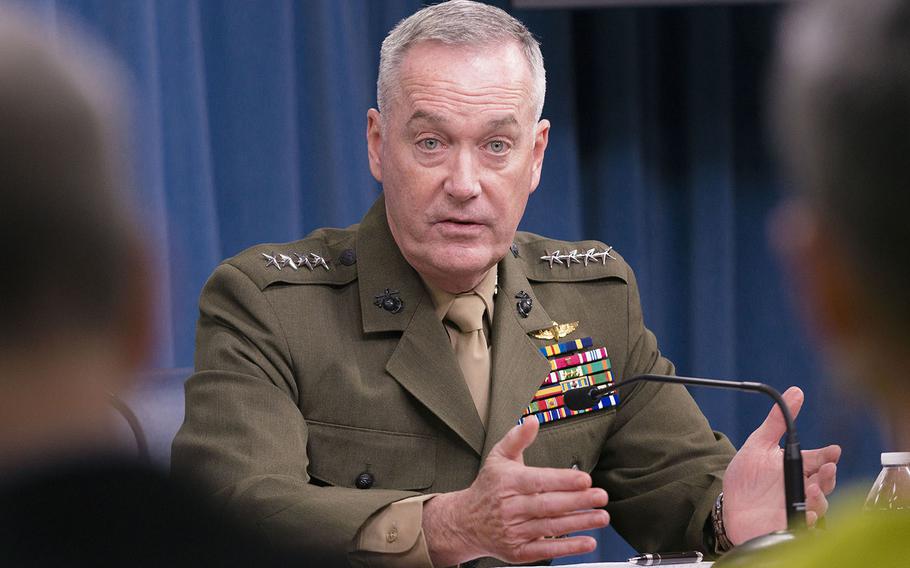 WASHINGTON — The United States must adjust its approach to preparing for wars that in the future will likely be fought across multiple regions and in a variety of domains, the nation’s top military officer said Tuesday.

The American military is examining changes that it would need to make for such “dynamic and complex” fights that could include land and sea combat as well as space and cyber operations, said Marine Gen. Joseph Dunford, the chairman of the Joint Chiefs of Staff. The general made the statements at the Center for Strategic and International Studies in Washington during a military forum hosted by the think tank.

Dunford used a potential fight with North Korea as an example. Just 15 years ago, a war with the reclusive nation would have been limited to the Korean Peninsula, the general said. Today, a fight with North Korea could involve a conventional land war on the peninsula, the threat of ballistic missiles within the north Pacific region and into North America, and cyber-attacks.

While the U.S. military is extremely well-prepared to fight against the insurgencies that it has faced the last 15 years in wars in Iraq and Afghanistan, “significant changes” would be necessary to prepare for more complex fights of the future, Dunford said.

“Current planning, organizational construct, and … command and control is actually not suited for that (full-spectrum) character of war,” he said.

Some adjustment proposals, the general said, would be presented to Congress within the coming weeks while others will be included in an upcoming classified report. Without providing specifics, Dunford listed ballistic missile defense; intelligence, surveillance and reconnaissance, and operational planning as areas that need improvement to retain significant military advantages over potential adversaries.

While he cited “Islamic violent extremism” as the “most pressing challenge we face right now,” he listed Russia, China, Iran as well as North Korea as nations that could provide key military challenges to the United States.

“We actually don’t have the luxury of choosing between a force that can fight (the Islamic State group) and one that has a modern nuclear enterprise, robust cyber capabilities, robust space capabilities, conventional and special operations capabilities,” Dunford said. “We as the United States have to have a complete inventory and balanced capability.”