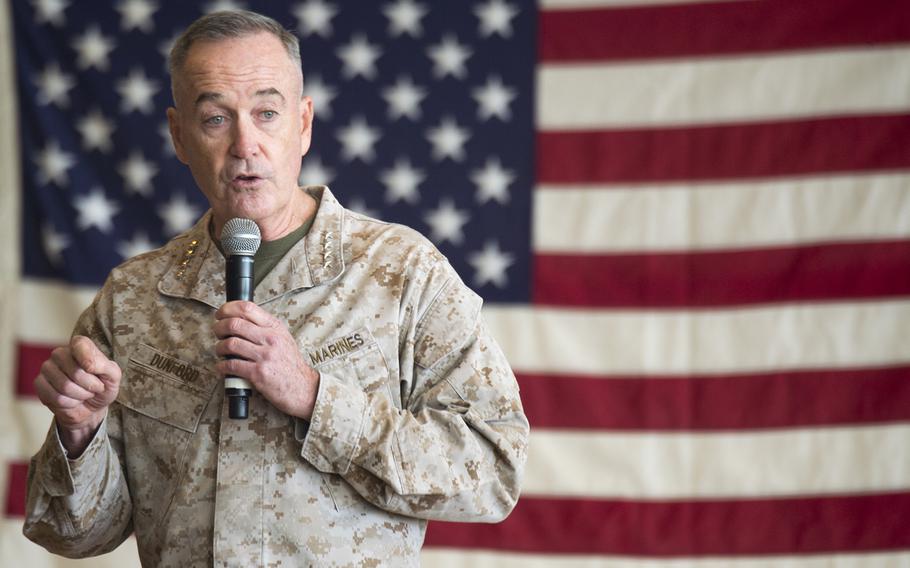 Gen. Joe Dunford, chairman of the Joint Chiefs of Staff, speaks to servicemembers in December during a NATO meeting on Tuesday, Jan. 16, 2018, Dunford argued for a continued use of rotational U.S. forces in Europe. (Dominique A. Pineiro/Department )

The United States’ top military officer made the case Monday for continued use of a rotational force in Europe to deal with a possible Russia threat, while acknowledging the need for reforms to improve NATO maneuverability in a crisis.

“I would say that none of us are comfortable with where we are,” Marine Gen. Joseph Dunford, chairman of the Joint Chiefs of Staff, told the Defense Department’s internal news service. “If you are complacent in this business, you are obsolete. So you need to stay focused.”

Dunford made the statements ahead of a two-day meeting of NATO defense chiefs that began Tuesday in Brussels, which will focus on plans for a new alliance command structure and its missions in Afghanistan and Iraq.

The general said he favors a U.S. military posture that utilizes rotational forces, even as the Pentagon studies alternative basing strategies to assure allies along Russia’s western border.

In November, NATO approved a plan to set up two new commands designed to ensure American reinforcements can safely cross the Atlantic Ocean during a crisis and convoy on land throughout Europe quickly.

As NATO has adapted to a new security environment in Europe, Dunford said, rotational forces have proved effective at boosting combat readiness.

In Europe, the military has become reliant on a range of rotational units to carry out a mission that has grown since 2014, because of concerns about a more aggressive Russia.

The Army has boosted troop numbers with a U.S.-based armored brigade, combat aviation brigade and a host of enabling forces that operate for long stretches in Europe. Inside the Army, however, there is a growing debate about whether that model is sustainable over the long term because of demands on soldiers and long separations from families.

An Army War College study conducted last year, which recommended permanently basing another brigade in Europe, found that the long unit rotations are more costly and can take a toll on morale.

But Dunford said he has received positive feedback from the Army, whose leaders have also said rotational forces provide a higher state of combat readiness.

“This model seems to work pretty well for the soldiers, for the families and allows us to meet commitments with the infrastructure available,” Dunford told DOD News. “It won’t surprise you, I have a bias toward rotational models.”

The Marine Corps, where Dunford has served for 40 years, has traditionally relied more than the Army on rotational forces for missions abroad.

Details of the command revamp still need to be hammered out, but it will recall how NATO was organized during the Cold War, when roughly 30,000 troops were stationed at 30 different NATO commands. As concerns about Russia faded after the collapse of the Soviet Union, that number dwindled to about 7,000 personnel working at seven NATO commands.

Allies were also slated to discuss stabilization efforts in Iraq, where NATO has deployed trainers, as well as the ongoing mission in Afghanistan.

Last year, NATO agreed that it would expand its training effort in Afghanistan in 2018, but the alliance has no plans to return to a formal combat role as the war heads into its 17th year. Gen. John Nicholson, who commands NATO’s Resolute Support mission, was slated to brief allies Tuesday.