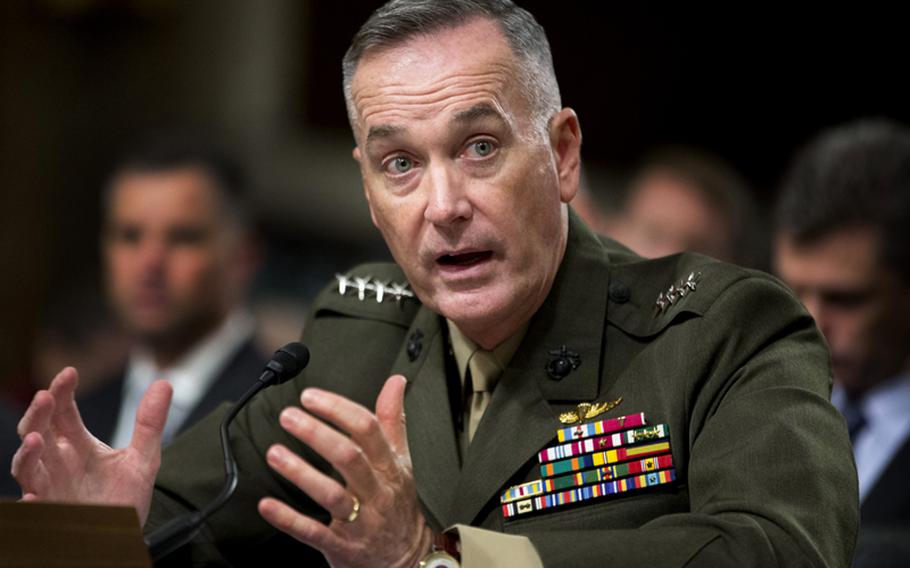 Marine Gen. Joseph Dunford, Jr. testifies on Capitol Hill in Washington, Thursday, Nov. 15, 2012, before the Senate Armed Services Committee hearing on his confirmation to be the commander of the International Security Assistance Force and to be commander of the U.S. Forces, Afghanistan. Dunford would replace Gen. John Allen, who is the subject of a Pentagon investigation for potentially inappropriate communications. (Manuel Balce Ceneta/AP)

WASHINGTON — The coalition can still “win” in Afghanistan, but the U.S. must maintain a strong presence and commitment after 2014 to maintain stability in the region, Marine Gen. Joseph Dunford told Senators on Tuesday.

“From my perspective, winning is achievable,” Dunford, the top U.S. commander in Afghanistan, told the Senate Armed Services Committee.

Dunford, the commander of the International Security Assistance Force in Afghanistan, defined winning as completing the transition to an Afghan lead on security, supporting a democratic political process and denying al-Qaida sanctuary.

“If we do those three things … I believe by the end of 2014, we can look at the families and the soldiers, sailors, airmen and Marines that have served over the last 11 years and say that we won,” he said.

Dunford would not spell out exactly how many troops he believes are necessary for a post-2014 presence in Afghanistan, even after urging from Sen. John McCain, R-Ariz.

He said he has not yet provided a recommendation to the president, and that a bilateral security agreement and promises of continued commitment are more important than a specific number.

Dunford also said he wants to see how Afghan security forces perform this summer before recommending a U.S. presence after 2014.

“I can’t tell you how disappointed I am in your testimony,” McCain said, stressing that a specific number is “critical” to the Afghan people.

Still, Dunford told senators that the U.S. must maintain some presence and commitment in Afghanistan even after a successful transition.

“I think a constant drumbeat of our commitment post-2014 is necessary,” he said. “Having no forces and no presence post-2014, in my mind, would undermine our campaign success. … Afghanistan would be at great risk of instability.”

Similarly, he said, it would be nearly impossible to achieve and maintain U.S. goals with a group of just 2,000 troops.