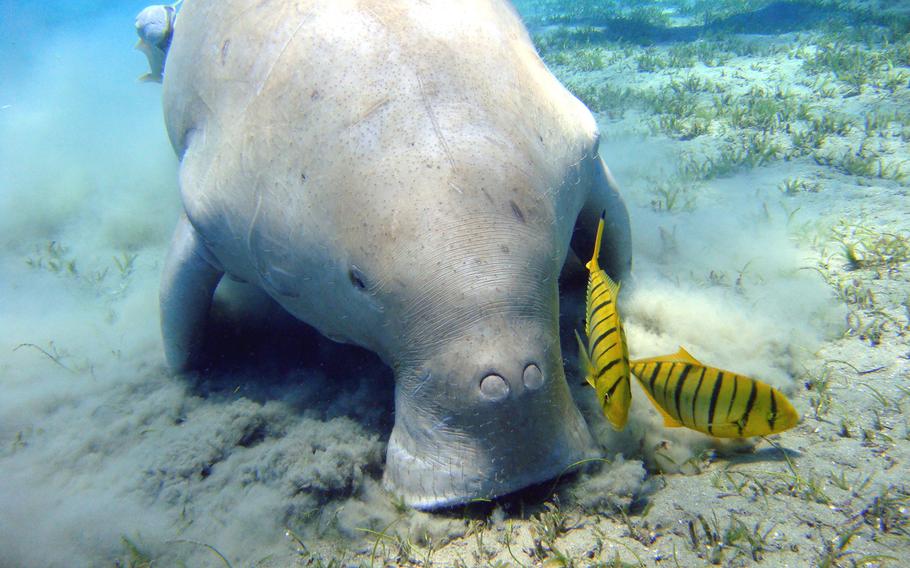 A Japanese Ministry of Defense report stated that dugongs had been seen eating seagrass in Oura Bay off the island of Okinawa -- the proposed site for a new runway for the U.S. military. ()

CAMP FOSTER, Okinawa — It’s unclear if recent evidence of endangered dugong activity would add fresh ammunition to a debate over allowing Marine Corps runways to be built in an Okinawa bay, according to the island’s prefectural government.

The Japan Ministry of Defense confirmed this week the protected marine mammals were eating seagrass in Oura Bay last year, but that information was not included the findings in a landmark environmental assessment of the runways filed with Okinawa prefecture in December.

Okinawa has been weighing the ministry assessment for months and is expected to make a decision this winter on whether to allow Tokyo to fill a section of the bay for the new U.S. air facility, which will expand Camp Schwab and create a replacement for controversial Marine Corps Air Station Futenma.

The Futenma move to Oura Bay has long been part of U.S.-Japan plans to realign forces in the Pacific, though the relocation has been stalled for years due to local opposition.

A ministry survey showing dugongs — a relative of the manatee considered critically endangered by Japan — grazed on seagrass in the bay between April and June of 2012 was released following a records request by Japanese media and was confirmed by Stars and Stripes.

Okinawa Gov. Hirokazu Nakaima declined to comment this week on whether the survey may affect his decision on Tokyo’s application to reclaim land for the runways. But a spokesman said his office had already been considering the dugong activity recorded by the Ministry of Defense in and around Oura Bay in recent years.

“Traces of dugongs eating seaweed were confirmed in 2009 and it is believed to be the same site that the recent traces were found,” said the governor’s spokesman, Satoru Matsuda.

The dugong, which has deep cultural and historic significance to the Japanese, was at the center of an environmental struggle over the controversy-riddled Futenma relocation project for years.

A U.S. court ruled in favor of Okinawans in 2008 and compelled the military and Japan to assess the potential impact of V-shaped offshore runways on the wildlife and habitats in the bay and along the island’s eastern coast.

A 7,000-page environmental study compiled by the Ministry of Defense and delivered to Okinawa last year was applauded by the United States as progress toward the Futenma move. It found that three dugongs were spotted in the area in recent years but sparse evidence of activity in Oura Bay where the runways will be located.

Overall, the ministry reported that the runway fill project could be done without significant harm to the coastal environment, including the slow-moving mammals and their habitat in the bay. A panel of Okinawa scientists and experts that advises Gov. Nakaima disputed that claim last year, saying the runway construction could cause irreparable harm to many animals and plants in the area.

The ministry assessment given to Okinawa will not be reconsidered, a Ministry of Defense spokesman told Stars and Stripes.

Meanwhile, the ministry will continue dugong monitoring in Oura Bay and the surrounding coast.

“We intend to give full consideration to the dugongs and avoid and minimize impacts of the project as much as possible,” the spokesman said.

The recently released findings on dugong feeding in 2012 were part of an annual ministry survey that was wrapped up in May.